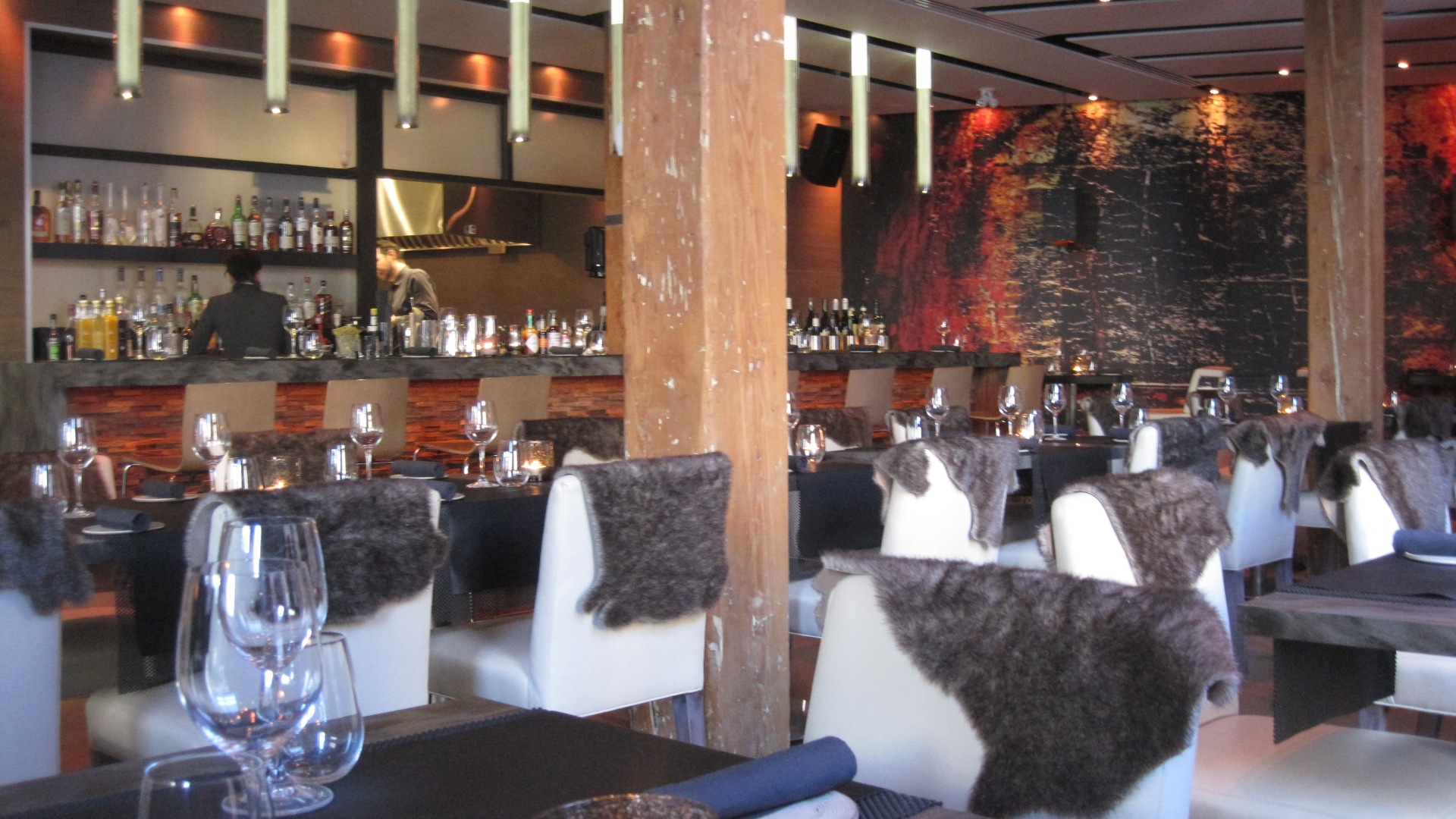 I am going back in time again to the year 2004; the location was Brontë on Sherbrooke St. / corner St Mathieu. This was the first time I fell in love with Chef Joe Mercuri’s food.

My girlfriend Belinda and I used to treat ourselves to exotic dinners when it came time for pure self gratification of the highest level. So we decided to visit Brontë, a restaurant that was listed as one of the top 10 best restaurants in Canada by En Route magazine to dine in at the time. I still remember as of today being puzzled but awed by the creations we were presented with. We did not quite understand what the foam thingy was next to our delicious pieces of lobster; it looked kind of weird, yet original and innovatively different.

It was the first time we had seen anything like it and everything we ate there tasted really damn good! Then much to our surprise, in 2010, Bronte closed its doors and we could never return. We were so sad and upset, how could a restaurant that won so many accolades go bankrupt? We did not understand. There would be a permanent void left in our lives. Forward to ten years later, we still talk about that dinner and the irony of the foamy thingy (Belinda’s words). Just memorable!

So when I heard that Chef Joe Mercuri was coming out of hiatus and finally opening a new restaurant called Mercuri on Valentine’s Day, I was truly excited. Like a little girl in a candy store, all I could think of was going to try his new dig and some of his latest creations, better sooner than later.

Mercuri is located on the corner of Wellington and Soeurs Grises (one block over from McGill St.) and not its actual address. This warehouse type loft that has been completely renovated with its brick walls, wood floors and beams, black granite like tables and white chairs with its faux fur draped across the back, making the decor very chic and up and coming. The L shaped restaurant is separated in two, the latter will house the rotisserie bar by the same name slated to open May 1, 2014. Against the wall facing the kitchen you will discover a long bar attractively lit in orange hues and a wine cave displaying the restaurants collection of wines.

We were seated in the corner banquette and had the perfect view of the entire restaurant. What we saw was a handful of diners and a beautiful blond seated at the bar while music played softly; but you could hear a pin drop. I loved this because it seemed as though we had the whole place to ourselves and we had the full attention of the staff for the next couple of hours. Let me also mention it was an early dinner on a Saturday night and the usual weekend crowd had not arrived yet.

I wanted to try cocktails tonight as opposed to our usual bottle of wine, so I opted for the memorable 3e etoile. A mix of prosecco and liqueur of fragoli which was concocted at Bronte in 2004. The bubbles and sweetness of the raspberry liquor were the perfect way to start off the meal. My dinner partner-in-crime, Frenchie, had a cocktail of pamplemousse and mint. Very refreshing and a modern day twist on the Mojito.

The menu, which you will not find listed on the website, consists of about five to six entrees, main dishes and dessert. You can also choose the tasting menu, which I highly recommend if you like surprises and/ or are not a picky eater or do not want something specific for your meal as the choices are left purely at the discretion of the Chef and sommelier. Dishes for the tasting menu are not listed but consist of an amuse-bouche, an entree, a main meal with dessert for $85.00 per person. For an additional $ 35.00 you can also have the wine pairing.

I was told by our waiter Mike if we ordered the tasting menu, we both would have to order it. Frenchie, being a skinny guy with not much of a “hungry man” appetite, opted out, leaving me with no choice but to order a la carte. Too bad, because if ever there is a place where one should go for the whole kit and caboodle, it is here. Mercuri at his best, presenting his masterpiece creations and a combination of flavors that will blow you out of the water when they’re given free rein. Nonetheless, ordering single items will bring no disappointment; for starters I had the Tuna Shasimi, three slices of raw yellowfin tuna around a scattering of mango cream, tobiko, powdered cilantro, and black sesame crumble and a single cellophane noodle made soya and mirin, and rice crisp. Purely decadent!

We opted out of the bottle of wine this evening and ordered two glasses of ‘Merlot Cellar # 8’ and a glass of ‘Dance with the Devil,’ both are bold and aromatic, perfectly complementing our meals of magret de canard, seven heavenly pieces of perfectly cooked duck breast in light wine sauce, with large portions of chanterelles mushrooms and crispy broccolini. Another explosion of juxtaposing flavors in the mouth, the softness of the duck against the crispiness of the broccolini, I cannot describe the other flavors in my dish as about now we were starting to get totally enwrapped in our food and starting to lose it. We were drawing attention to our table with our orgasmic moans. 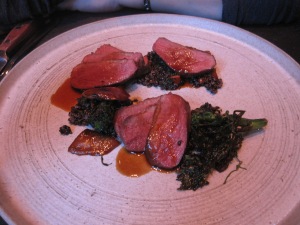 Frenchie was very happy at Mercuri because he got not one but two boxes of bread filled with sesame topped papadums and basil sprinkled Foccacia. He sampled my Tuna Shasimi and ordered for his main meal the leek charred ravioli which were fully filled pockets of black dough stuffed with copious amounts of fresh homemade ricotta and basil, placed on a cushion of puréed celery root and layered shitake mushrooms. A drizzle of truffle oil brought out the smoky woodsy flavours of the charred leeks to complete this dish or more to compliment it, the ravioli were topped with a thin layer of fried pancetta and crunchy hazelnuts on the side. Is this enough to pique your curiosity or arose your senses? I call it genuinely orchestrated to tantalize your palate and taste buds and that is exactly what was achieved, all masterfully skilled and implemented. 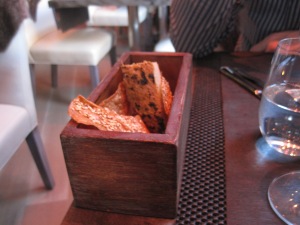 For dessert Frenchie had the Lemon Meringue tart with a quenelle of sour cream ice cream on the side and eight garnishing of extra meringue strategically placed on the dish. I had the Bolivian coffee pudding topped with mango jelly and brisures of chocolate/coffee grind mix. Both desserts again emphasized different textures and flavors and complemented by the two orders of espresso coffee. 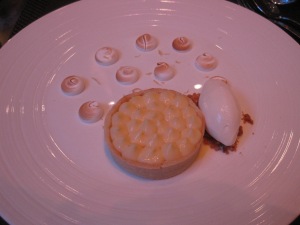 All in all the service was friendly and professional. I felt a little intimated as I walked in, but that feeling quickly surpassed me. I even managed to draw a big smile out of our waiter. The staff was very very attentive all evening, they must have wondered something was amiss with all the pictures we were taking, because halfway through the meal, they called my phone. We drew way too much attention this evening we thought. On the way out, they gathered around us to say goodbye and to help us with our coats. We were elated and feeling very special at this point and who does not want to feel like this when going to spend your hard earned cash. This is what dreams are made of, these special moments when you know life is Grand!