Tavern Gaspar is located in a restored 19th century warehouse in Old Montreal  on de la commune street, a prime stretch of real estate just before the waterfront. This is another restaurant that is owned by the Antonopoulos group and  that is attached to a boutique hotel : The Auberge du Vieux Port. This restaurant opened in October 2011 and is another addition to a slew of restaurant, hotels, lounges and spas that this merchant owns in Old Montreal. (See review Méchant Bœuf-Jan 2014). The Executive Chef at Taverne Gaspar is Gerald Barthelémy, a relative newcomer to the Montreal dining scene as his previous gigs have been in Paris, France at the Cou de la Giraffe and Hotel Vernet.

We can classify this establishment as a Gastro pub highlighting French Quebec and American classic pub food. Tavern Gaspar maybe caters more to the tourist crowd because if its location, but it has it loyal clientèle of locals and 5 à 7 crowd of hipsters. It’s menu has changed  very little since its opening two and a half years ago, but still remains true to its mission. I know what you’re are going to say, it took you yet again two years to visit the place. Yes, I had good intentions but life got in the way (long story).

The Tavern decor remains fresh with its brick walls and black leather and wood banquettes, antique chandeliers running through the tin tiled ceilings and a bar with almost any kind of beer on tap. The room is deep and cavernous but the atmosphere is bubbly and festive with  loud music either emanating from the live DJ that goes by the name E11even  who you will find stationed at the foot of the entrance (I almost tripped on the wires) . On Wednesday evenings there is a live band playing music, this event is sponsored by Jack Daniel’s , the spirits company. ( not the guy).

Most of Tavern Gaspar events are sponsored by liquor companies. On Thursday night you can find the Carnivore Table Hôte menu sponsored by Jim Beam Bourbon and a special priced menu from 10-12pm for those late diners at only $15.00 with $2.00 oysters special. The prices here are very reasonable and they have something for everyone, including an Oyster Bar.

On the evening we visited, we sat completely at the back of the restaurant against the brick wall that was so attractively lit up. I enjoyed this nook very much as it was a romantic spot and away from the crowd. I really liked the feel of the place with its hip clientele of all ages.

We began our meal with a bottle of sparkling water and a glass of Pinot Noir and Pinot Grigio from Bolla.

I thought the white wine complimented my Lobster sliders and House chips at $ 12.00. This dish was highly recommended by a friend who lives nearby and comes here often. So my mission was to definitely  try the lobster sliders and so I got exactly what I came for. A must try because they are simply delicious and hard to find in many Montreal restaurant., unless it is a sandwich place or a seafood restaurant.  But none sampled in my lifetime have been as delicious as the ones they serve at Tavern Gaspar . I will try to duplicate these warm  lobster filled pockets of bread at home  for my daughter who is a big fan.   She has been craving a good lobster roll since trying one in Maine a few years ago. 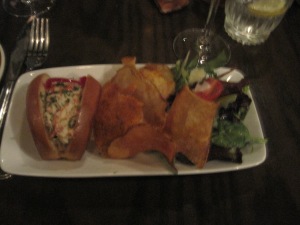 The Lobster slider came on a small toasted miniature hot dog type bun. It was filled with copious amounts of lobster, avocado and coriander in creamy mayonnaise. Just Heavenly!  Not too fishy tasting, not salty or overpowering in taste. The house fried chips were crispy and fresh,  thin slivers of potatoes, fried to a crisp ,not oily or rancid tasting at all. A small green salad with vinaigrette made of oil and vinegar  accompanied the rest. Perfect!

Frenchie had the House Rillettes at $ 12.00 with pickles and sweet onion confit and a few  baguette crostini on a wooden board. I tasted the Rillettes and believed it was pork, but I am wondering if it was gaspor pork as it is quite costly and not always readily available these days. Our waiter was not able to shed some light on this matter either. Frenchie and I agreed it was good but average in taste, nothing too outstanding or different about this dish. Except for the confit which was imaginative and a good accompaniment.

It was not because it was Friday that I wanted Fish this evening but  more because I was craving fish and chips all week.  So I went with the Classic Cod Fish dish at $19.00 and a glass of St. Ambroise Pale ale. I got strawberry blond  brew instead,  it was very bitter for me  and darker than the usual one I drink. The waiter never materialized again to be able to exchange it, so I drank half of it  cause I was thirsty and Frenchie polished it off  the rest. The Classic Cod came with three generous pieces of cod fish which were dipped in beer batter and deep fried. The fish came with  julienned shoestring French fries and tartar sauce. The tender morsels of cod were melting in your mouth perfectly seasoned and crispy on the outside, yet moist on the inside, not overcooked or too dry. The French fries were on perfectly crisp. as well. All was to my liking.

Frenchie had a gigantesque portion of Ribs in a Jim Bean Bourbon BBQ Sauce at $28.00, with a side order house fries, and coleslaw. The meat was fall of the bone tender with a touch of the fork. The Jim Beam Bourbon, sauce was different, original and really tasty. The Bourbon made a big difference in the flavour of the sauce. The ribs had no sign of having that twice cooked rancid meat staleness taste that we can find in a lot of rib and chicken chain establishments these days in Montreal. Leading me to believe that they were  either freshly cooked or slowly cooking in their ovens or smokers before the dinner arrived.

All in all, our experience at Tavern Gaspar was very  good. I was told by people that they didn’t like Tavern Gaspar,  but to each his own. It really depends on circumstances and the mood you are in when you visit.  Firstly don’t go with a curmudgeon, or a cheap stake, if you are not too fussy or want good pub food this could be the place for you. I found it to be a good price quality for the portion and the cost. I have eaten in worse places, some so bad I was sick 10 minutes after leaving the restaurant. I did not get that here. I left without dessert or coffee because I was completely satisfied and I was getting cold and tired and craving my bed after a long week of hard work.

Tavern Gaspar was a long awaited dining experience for me, but a definite return on any night of the week and especially to have a cold brew on their lovely terrace  or the rooftop terrace of the Hotel on a hot summer day after walking the tourist trap streets of Old Montreal.   It beats The Jardin Nelson anytime by a long haul!

Get with the program people….out with the old in with the new!  That is my motto these days…..maybe we should call Old Montreal, the New Montreal with all the new restaurants popping up all over the place.

Stay tuned next week with a continuation of my week of the Pub crawls.