Méson opened in late Spring of 2014 is a casual neighborhood Iberian style Bistro located in the heart of the Villeray district. It serves Spanish inspired dishes fused with fresh local ingredients. Owned by Victor Afonso, Sebastian Muniz, and Pedro Oliveira, and Chef Marie Fleur St Pierre of Tapéo, this restaurant is located on same street a few blocks down between Drolet and Henri Julien.They say if you find a good formula you should stick to it. But Méson is very different from its sister restaurant, as it serves very little tapas and more home comfort food. The portions are generous but not gigantesque. You can find almost anything to please any palate on the menu and if Marie Fleur St-Pierre has got her hands in it, it’s a sure guarantee that it is going to taste good.

I am a big fan of Tapéo and I had the pleasure of going there in 2013 with my mom for her 75th Birthday. My mom, the proverbial Italian martyr, never ever goes out to dine. But at Tapéo she ate to her hearts’ delight and enjoyed it immensely. She raves about it till this day to all her Italian friends. So it was only fitting that this year we celebrate Brains 22nd birthday with the family at Méson.

We arrived early, and got the private banquette in the corner of the room. We were immediately served a few plates of Foccacia topped with tomato, pepper and manchego cheese while we poured through the wine list. We decided to order wine by the glass as some wanted red and others wanted white. The wine list consists of mostly Spanish wines; unfortunately there was no sommelier to help us with our choices. So we were left to our own demise and picked, 2 glasses of Riojas Muga Reserva 2010 at $ 11.00 a glass, a white Valencia 2012-Bodegas Los Frailes, BLANC DE TRILOGIA for $11.00 and a rosé Empordà 2013 Espelt, CORALI at $ 10; this ended up being a good way to try different wines and we found all to be an exceptional accompaniment with our food.

Méson décor is minimalistic and very urban chic, my sister loved the décor and thought it was very urbanite, with its bare tables and chairs in done in black and in honey wood, non-descript walls and steel grid bar placed in center of the room and wall to wall windows. But at night it is very dimly lit with industrial lighting making it hard to view the menu. The noise level and loud music is also another annoying thing, cool and hip for the young locals but not appealing for the older generation.

Nonna looked tired after spending an afternoon at the pool in the sun eating Lasagna. She was not too hungry and very tired. I was kind of disappointed as I wanted her to enjoy Méson as much as she enjoyed Tapéo. It reminded me of the year I threw an all-out Tapas party for and spent a thousand dollars on food and liquor only to discover that someone mentioned to my guests that that tapas were small bite size entrees and that they better eat before coming over because they would leave starving. I had leftovers for two weeks. This would not be the case at Méson as although the portions are not large they are nonetheless filling.

Nonna decided to go with something light so she chose the Bacalao al horna at $ 22.00-Oven baked Cod Fish with potato salad and kale lettuce and corn. She cleaned out the whole plate and really liked the different flavors. The bacalao was tender, not overcooked and the side accompaniments were perfect. The warm potato salad and corn with kale was not too heavy for her. The portions were small; she did not have an entrée or any dessert. 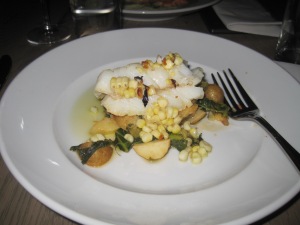 The Foo Foodie ordered an entrée of Vanilla infused Scallop Ceviche with citrus accent. The initial bite was a delicate surprise, but I found the scallops too raw for my likely after a few bites. The scallops were whole and texture was gelatinous. I would have preferred them chopped or diced and maybe marinated longer in citrus juices. For my main meal I chose the Pollo de Cornualles Asado, Cornish Hen with roasted vegetables. I got two drumsticks that were undercooked and bland. Not a sign of Spanish paprika or any other flavoring. I had to dig deep between the legs to get a little white meat. I came out very disappointed and just ordered coffee for dessert.

Frenchie ordered an entrée of Gaspacho soup at $ 8.00 made with yellow tomatoes, yellow peppers and apricots. He really enjoyed the creamy sweet combination of peppers and apricots together. As a main he ordered the Fileta de Trucha for $ 24.00-Trout in a cauliflower purée with milk of green asparagus and vinaigrette of white asparagus. Two people had this at our table and they raved about it, I felt the presentation could have been nicer; it did not look appealing and seemed to be drowning in the purée.      To complete meal Frenchie just had an espresso allongé as usual.

Both Chipmunk and Brains ordered an entrée of tartar de atun – white tuna tartar with pan con tomate. Fresh, flavourful, with a great texture they both like their choice very much. Brains ordered the Bacalao too and Chipmunk shared the trout with hubby. The boys, smiles and JD, ordered Fideos de con Queso- at $ 22.00 a Mac and cheese a l’espagnole to share. Unfortunately the waiter forgot about them and we had to remind him that their meal never came. While they waited we appeased them with tasting of our food but I considered this a big faux pas regarding service. The golden rule is always feed the children first, one can say Méson is not very child friendly, although I was asked upon reserving if we were going to need high seats for the children. I believe our waiter really dropped the bomb this evening or he was really totally clueless. Finally the Mac N cheese arrived with an apology but I found the service was rather slow and unappreciative. Our waiter was not rude but not overly accommodating. We hardly saw him and he almost forgot about us. It was an early Saturday evening during the first week of August, they were not extremely busy that evening.

For dessert, sis ordered the Cafe Flan to share with hubby, and Brains quickly ordered a piece of Chocolate cake at & $8.00 to complete her birthday celebration at Méson but knew that Nonna had some more cake waiting at home. As the meal progressed and prime suppertime ebbed and the night crowd began to arrive the noise level at Méson reached an extremely uncomfortable level for all entailed. So Brains scoffed the piece of cake and we downed our espressos and left to celebrate in a more quite place.

All in all Méson is a great neighborhood bistro for the up and coming young urbanite clientele of the hood. It’s a cool place with a great exciting vibe and great décor and fun music and above all great food. It is a great local bistro to hang out on a Saturday night that serves great food and spirits and can be classified as notch above the rest in this area. It is great to see changes in this old neighborhood with all the new and hip places popping up and it has been long overdue and we have to thank the Tapéo group for almost reviving this neighborhood, because it has been in decline for years.

Note to self it is not fit for old Italian tired grandma’s and pas du toutes kid friendly.