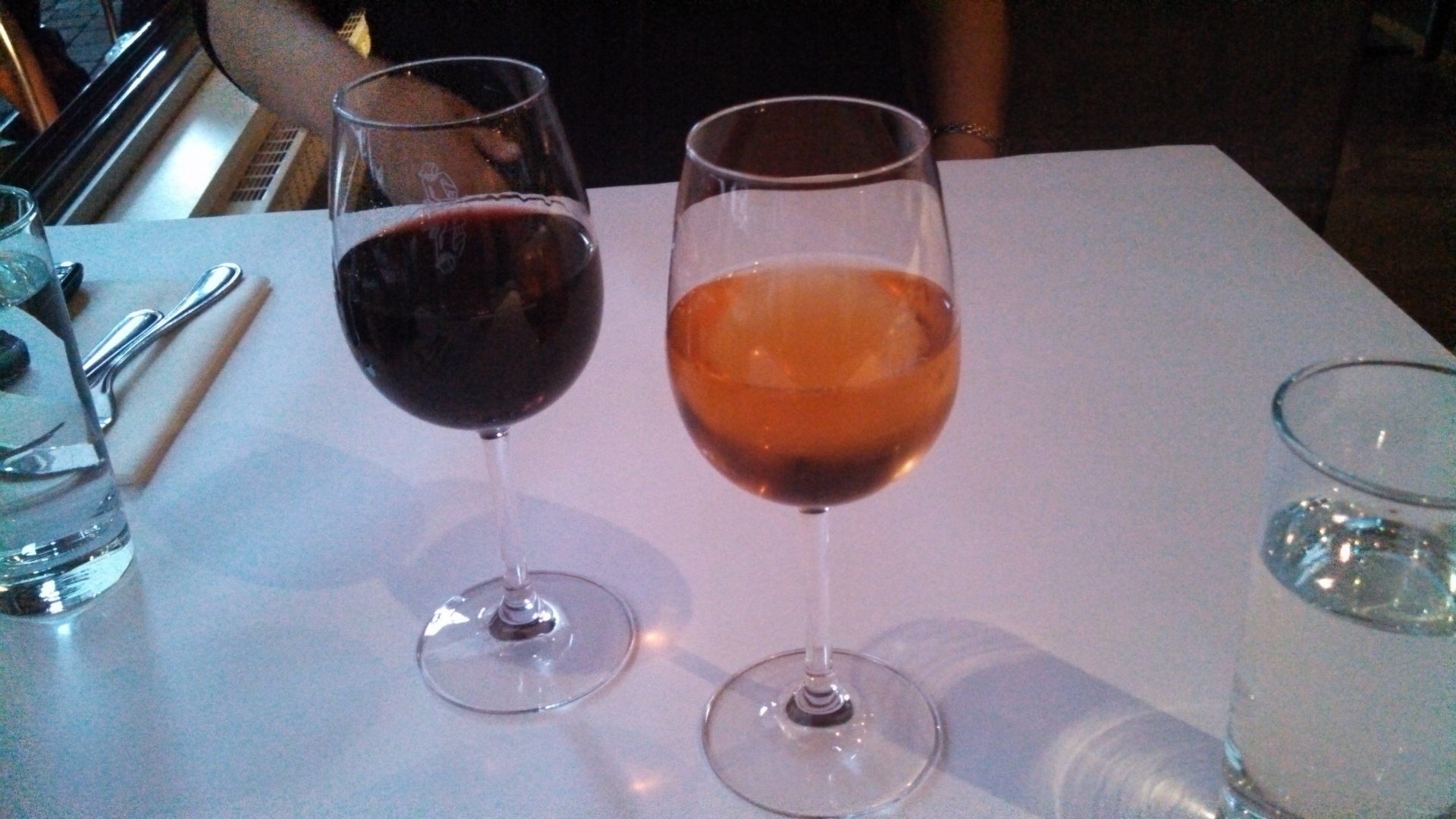 Do not get fooled by the name, “Boris Bistro” is not a Russian Restaurant. Though, it has got to be undisputedly one of the best open air restaurants in Old Montreal serving French Bistro type food. What makes Boris Bistro different from the rest is its old world charm. Housed between two buildings on McGill Street in the financial district you get the feel that you are dining in an ancient city of roman ruins but it’s actually a courtyard. Similar in look to the proverbial tourist trap Le Jardin Nelson in Old Montreal, this place is much classier, serving classic French favorites, fantastic cocktails and great wines. From the exterior the façade is a shell of what was once called a building, except once inside it reveals itself as an outdoor terrace with wooden tables and white umbrellas, trees, potted plants and walkways. Very romantic I must say, especially at night when it is lit up oh so nice!

The other half of Boris Bistro is on the interior for those oh so cold romantic Montreal winter nights. Done up in white walls with dispersed huge art pieces hung here and there, the look is clean fresh, crisp and minimalistic. You will see a scatter of modern glass vases of flowers and plants set against a predominately white backdrop. White tablecloths adorn the each table and a light wood bar and stools can be found against the wall alongside the restaurant.

I had visited Boris Bistro a few times over the years, the first being eleven years ago in January 2003 for a late night snack with my colleagues after our trade show. We were seated inside on this cold winter night. Being too tired and hungry I did not recall much about the place except that we chatted up a storm about the events of our Snow Show, which brought together the ski industry giants across Canada and the U.S. Those were the good old days and we shared a lots of laughs that evening and drinks.
The second time was in summer of 2008 when I sat on the cool terrasse enjoying a glass of wine and listening to some good music.

This evening after picking up Frenchie at work I decided to surprise him and suggested an impromptu dinner at Boris Bistro around the corner. Frenchie was in awe as he entered the terrasse; he had never really remarked the facade and did not expect to discover that this hidden gem lay behind this exterior. Unfortunately there were no more tables available on the terrasse that evening but our kind considerate hostess suggested an interior table near the large opened window overlooking the courtyard would be better on this evening when it looked like rain. To my surprise the interior had changed a lot and I found it to be more comfortable. Our view was perfect, the menu even better. We watched the people in the courtyard for a while before our waitress showed up to take our order and I spotted Michel Girouard with his Yorkshire terrier sitting next to him on a chair under one of the vast umbrellas in the yard. At first recognizing him but not being able to place his name, Frenchie and I discussed back and forth for a few minutes throwing out names of past of Quebec TV personalities of the 70’s and 80’s. If one was born at the time one would remember that he was quite a flamboyant character and opening gay at the time. When only but a handful of media personalities at the time in Quebec would dare, he was quite modern and avant garde for his time, a quite a trend setter. Well, this can be said of the people who dine at Boris Bistro.

After a little name dropping and people watching our waitress arrived and we ordered two glasses of wine, a Domaine des Trosi Noyers Rose 2012 – pinot noir de Sancerre –Loire at $11.00 and a Gelso Rosso Basicilcata 2010, Tenuta i Gelsi at $11.00. I must mention that their cocktail list is also fantastic with a mix of old favorites and some really cool cocktails. Worth a try!

For starters I had an endive salad at $9.00, which I had been craving for a while now. Tiny bites of chopped endives with large chunks of blue cheese, swirls of cucumber and beets and large pieces of walnuts, a different twist on the classic endive salad, but this one was better. The bitterness of endives and sweetness of cucumber and beets made this salad lighter and balanced in flavors.

My second entree was a salmon tartar at $11.00 served with baguette crisp and arugula salad side. Nicely presented, served on a slate plate and filling enough to satisfy.

In case I was still hungry I ordered a side of frites maison at $5.50 to go with my tartar. A generous bowl of crispy fries served with mayonnaise aioli dip. Delicious and complimenting the salmon tartar perfectly.

Who would have thought! Of course I was not alone in my demise of the French fry eating and Mr Frenchie helped me with the consumption of the frites…now making him Mr. Frenchie Fry!

Mr Frenchie Fry also opted for two entrees, the Old Fashioned Cream of tomato soup served cold like a gazpacho for $ 7.00, one of his all time favorites and a dish called Fiochetti -$ 12.00, dumpling stuffed with rabbit in duck broth. These five large pockets of noodle bundles, stuffed with ground rabbit meat were delicious. They were tender and savoury, the duck broth served as a delicate base. Topped with bitterness of arugula lettuce, as a garnish, but enough to be a side, you get the best of both worlds.

The service at Boris Bistro was prompt and professional. We came, we saw, we ate, enjoyed every minute and left to enjoy the rest of the evening in Old Montreal.