It was during a promotional event with my employer that I discovered À la Folie macaroons back in 2010. Before then, I had not really paid too much attention to macaroons, only occasionally picking one off a dessert tray here and there and usually at some hotel buffet. These were mediocre at best and never a particular draw for me. I must admit I am not so much of a sweet tooth and I always found macaroons too sweet. Back then macaroons were not as elaborate as they are now, made with chewy mounds of coconut or almonds, and egg whites, they tended to be sticky and flavorless.

But it was just around this period in 2010 that the cupcake and macaroon rage started, and having nothing in front of me to eat and being very hungry, I sampled a few and couldn’t stop. These were no ordinary macaroons; they were from La Maison du Macaroon. Ranging from different colors and flavors under the sun, they were absolutely decadent. Their macaroons are small perfectly round pockets of crispy exterior sandwich cookies that break between your teeth when biting into to them, filling your mouth with a smooth sweet ganache cream of your favorite choice of flavor.

I fell in love with these macaroons. The presentation was a whole other thing. Beautifully presented in gorgeous boxes, they look more like jewellery than food and make a great gift idea. Interesting I thought!

In 2012, French born pâtissier Gaëlle Crop and her life partner Johan Crop opened a second location at a kiosk in The Eaton Center Downtown. Gaëlle learned her trade in Paris, at the famed patisserie of Gérard Mulot, at the Plaza Athénée. They moved to Montreal and opened La Maison du Macaron on de la Roche St. in 2008 specializing only in macaroons and were met with a lot of success.
This year I revisited the kiosk at Eaton center when I wanted to purchase a box as a gift for someone and discovered they had rebranded and changed their name to À la Folie. They have added to their repertoire, single slices of French tarts, choux pastry, of course their famous macaroons in regular size or in larger formats. They are being more creative with different flavors and have changed the marketing of the store and the take-out boxes.

The new store is now on Mont Royal, has a new minimalist look and design, the grey decor highlighting their colorful products and making them pop at you from inside the showcases like real jewels. 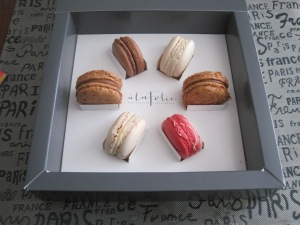 The packaging is also more visually appealing: incorporating vibrant colors of a Moroccan baroque type theme. Each box is masterfully crafted so that each item is safely nestled in its own slat. You will receive with your boxed desserts matching shopping bags that feel more like you purchased your goodies at Holt Renfrew than a pastry shop.

Absolutely stunning and very impressive for the recipient, who was totally in awe and had never seen anything like them in Montreal.

Mission Accompli! I love making people discover new things, especially something of such high caliber as the patisserie of À la Folie!

I was more than pleasantly surprised and happy that I was able to please someone and introduce them to something new, I highly recommend a visit to the stores.