Kyozon is a fresh concept in dining new to Montreal, since this past year. It’s a “Kaiten” style restaurant where diners pick up food of their choice from a rotating conveyor belt. Moreover, Kyozon means to merge together in Japanese. So apropos is this name of this restaurant/bar as it melds well together two experiences. Housed in a historic grey stone former home at the turn of the century that is situated on Crescent street, it once was the old now defunct Hard Rock Cafe; if you can remember. The 8500 square foot space has been totally redesigned by a team of designers at Andres Escobar and Associes. They have even won an award from Commerce Design Montreal, but we will have to wait till Fall to see if they have won the “People Choice Award for best new commerce design in Montreal for 2015.
As we stepped through the door, we were in awe with the massiveness of the space. The center of the room has an epicenter bar and soaring ceilings. Above it the chefs elevated kitchen gazes over the room with its exposed hanging sake barrels and terracotta brick walls, and exotic wood finishes.
The expansive room easily fits 250 people. The top floor or level of this restaurant is where you will find long table counters with chairs and the conveyor belt where New Asian food is served. New Asian food is a term referring to a mix of Asian food, not fusion, but a mix of Japanese, China Thai, Vietnamese and Cambodia all wrapped up into one.  The idea came from co-owner Brian Bendix, who lived in Japan in the early ‘90s. He wanted to recreate in Montreal something he found often in Japan, with its crowded multi-generational streets but where tradition deeply rooted still can rubs shoulders with modern concepts. He wanted something old, yet newly exotic with a touch of warmth and authenticity. He has managed to create this in Kyozon decor.
For those of you who don’t know who Brian Bendix is, he is also the”CEO of Stambac International, a company that specializes in supper clubs or entertainment type restaurants and venues’’. Along with Thomas Nacos Group of Weinsten & Gavinos , Newtown, Decca 77 and Atelier Argentine fame and two other partners Steven and Marcel Elefant they decided to invest and create this new start up on Crescent street. That is lots of experience and knowledge under one belt and it will be a winning formula for some time.
Kyozon with its subdued lights and lounge music and great innovative cocktails has more of a nightlife atmosphere and is more of a bar than a restaurant. With its award-winning mixologist Lawrence Picard of Nectar & Mixologie, the cocktail list here features creations such as the Shojo Sour , Kato Martini, Paradise Swizzle and Monkey Juice, the list goes on and you want to try them all at $ 10.50 a pop.

Cocktails sampled this evening were Kato Martini, for The Foo-Foodie, made with Grey Goose Vodka, green tea, Midori liqeur and cucumber juice with a garnish of thinly sliced cucumber, it was very refreshing, another one was needed to in order to be intoxicating. Ordered as well were two virgin drinks the Buddha Temple & Pataya Beach at $ 7.50 for Brains and her friend Biff because they just were NOT in the drinking mood.
For starters the two BFF ordered the White Belt platter of 6 pieces of Shasimi and 6 pieces of Maki at $ 26.00 to share and two platter of Maki Salmon avocado at $ 14.00 each with a bowl of mixed rice at $ 8.00. 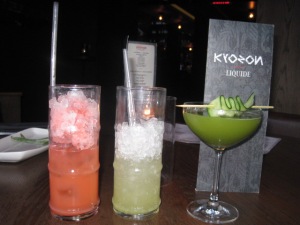 The Foo Foodie went the adventurous way and ordered Newstyle Ceviche which consisted of tuna, salmon and yellowtail thinly sliced with lime juice, shallots and purple coriander for $ 16.00 and an entree of prawns tempura for $12.50 . The Ceviche platter was totally refreshing with its lime juice and thin slivers of delicate fish topped off with scented aromatic purple Chinese coriander leaves. Visually it looks like a rainbow of colors on one plate and a dish definitely worth trying, not only for its taste but for its visual aspect. The plate which was the nicest part of the dish due to its colorful pattern made it exceptionally delectably eye catching. The prawns were also very good and had the right texture and freshness.

I sampled from the Biff’s platter a couple of makis, which were equally as pleasing and different in taste and conception.

Unfortunately that evening the upstairs was not open for business. We were told it was only open for lunch. The la carte menu was the only thing available. Dommage, as Biff said he had been there for lunch and the conveyor belt and choices were much more interesting and fun. I think this is the way to go when visiting Kyozon to get the full effect of the Kaiten style eatery and experience.

I also ordered a platter of Spicy Salmon  Avocado Makis @  14.00 , it was very good and fresh but twice their price at any other sushi restaurant .

Also sampled were the Prawn Tempura at $ 12.50 that were kind of limpy .

For a little addition we ordered a bowl of mixed rice, which was generic.

Leaving a little disappointed this evening and short $ 140.00 I feel the prices at Kyozon are a little steep for what we ate and drank.
The decor is great and the ambiance exciting, but it was also a very quiet Wednesday night and it left me wondering how long they can keep up the pace at this rate. It would be a shame if Kyozon is not as successful as its sister restaurants, being a fan of Weinstein and Gavino for many years, it became my home and the staff my friends for the best part of my weekends. I was hoping to find this here. The staffs are very accommodating, but young and inexperienced. Very few suggestions were made regarding the menu, our waitress disappeared for long periods not to return till the end.

On the onset, upon walking in, I was turned away at the door saying I had no reservations; which I had made weeks ahead. For a moment I thought they were not able to accommodate me even though it was an empty house. I had a fleeting moment of panic, and felt like Persona non grata! All the while, Brains and Biff waited seated inside at the best seat of the house waiting for me to arrive. Not a good way to start. Thinking in my head that Kyozon has ways to go in the hospitality area… the place is still young, it needs a chance. All I have to say is KAMPAI!

** as this time of publishing this article. I found out that Kyozon closed today.