WARNING! This article is subjective and purely my opinion. After eating at GEMA Pizzeria a year after its opening I can say it has dethroned the King of all pizzerias, Pizzeria Napoletana on Dante Street.

For many years Pizzeria Napoletana was the forerunner for anyone who wanted to eat a good thin crust Neapolitan pizza in this city. For many years on any given weekend the line ups were long. People came from all over the city with their bottles of wine to sample a slice of authentic Neapolitan thin crust pizza. It was difficult to get a seat.

Other pizzerias have popped up over the last 10 years in the environs, like La Bottega on St. Zotique and this year its casual sister restaurant San Gennaro’s. There was always Piatto Pieno and then many of those whose little restaurants around the market who served pizza. Then word got out that Stefano Faita was opening another restaurant called Pizzeria GEMA on Dante Street with much fanfare.

The true story of the rival pizzerias is set in the heart of Little Italy on Dante St. with Napoletana and GEMA going head to head on this quiet street that has been basically monopolized by the Faita clan. Opened with his partner from Impasto Michele Forgione, this small space is an acroynmn of their children’s initials on a street that has become synonymous with the Faita name. It may be a family affair, but it started a war among pizza foodies on who has cornered the pizza market on this block the last year.

GEMA wins by a long shot, because the reputation that follows them wherever they go. GEMA is unpretentious with its whitewashed walls and wood tables and banquettes. The space has been modernized, but some elements of the old space remain. Like the industrial green lamp post fixture in the center of the room, and the wall encased fan ventilators that keep the heat out; all these old style elements blend well with the style of the place. It has a modern urban chic feel that welcomes the local young urbanites who have moved back into the neighborhood to regain a feeling of their Italian roots. At GEMA you will not find any of the cheesy and outdated decor of past pizzerias with their checkered table cloths and murals of some Italian scenery. It is cool and subdued, but it does slap on the back of the head with it have “looks at me attitude”.

The small white bar serves as a focal point showcasing a black wood wine cupboard, its wine selections and a few mismatched seats. It is the place to sit for a quick bite or a slab of pizza.

GEMA does not use a wood burning oven to make their pizzas; instead they use a Moretti deck oven. So if you are expecting the taste of wood burning pizza, this may not be the place for you. GEMA serves a crispier thinner crust pizza. What makes the pizza special at Gema’s is the fresh local toppings. They use the best of fine ingredients, fresh from the Jean Talon Market around the corner. Like, local Quebec mozzarella di buffala made from bison milk and homemade ingredients like their porchetta and pepperoni. Every month a new pizza is introduced, starring some famous Montreal food industry giants or chefs and of course Michele and Stefano’s ideas and whimsies of the month also make an appearance on their pizza menu.

We started this evening with a bottle of red Donna Marzia-Conti Zecca -Negroamaro-2011 for $ 30.00 or $7.00 for the glass. Reasonably priced, this wine from the Puglia region of Italy with its dark aromatic berry fruit flavors earth tones and hint of clove, cinnamon and allspice can be slightly medicinal to some, but went well with the tomato topped pizza. 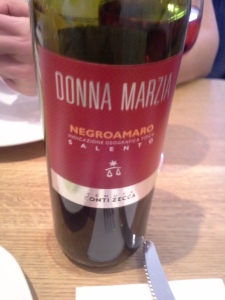 For starters we had two very refreshing salads that were original in flavors the- Salad MJT- salad du Marche Jean Talon for $9.00, which consisted of a mix of greens, fresh peas, endives and cucumber. Lightly oiled and seasoned. The exceptional difference here was the crunchiness of fresh peas and bitterness of the endives. What an ingenious idea I thought, something usually eaten warm in a cold salad, was a first for me; original in thought and concept.

The second salad was an Insalata di Polipo (Octopus), with copious amounts of fennel shaving and potato salad at $ 12.00. It was also very refreshing and pleasing on the palate with the flavors of anise, red onions and pieces of large firmly cooked potatoes. The only drawback was the scarce morsels of octopus that occupied this salad, just not enough for my likely.

Our start of the pizza’s tastings was the Pizza 1889 at $ 13.00, similar to the Margherita; it is Gema’s take on the classic pizza with fresh tomato sauce, mozzarella di buffalo and basil. This pizza had all the classic flavors, the ingredients were fresh, but it was too thin and difficult to cut. It was best eaten by ripping it apart folding it and chewing it with your teeth.

The second Pizza called Yann at $ 16.00 was basically the same as the Pizza 1889, thin crust except it was topped with homemade pepperoni. This is no ordinary pepperoni, you can taste the difference compared with the generic store bought ones, minus the heartburn from the nitrates. It was the only time I have eaten pepperoni that did not repeat on me all night long. For all those pepperoni lovers out there this is the way to go. The flavors were all there on the toppings but crust was too thin and hard to cut.

The third Pizza was the Capricciosa for $ 17.00, the more topping, the more expensive the pizza gets. The Capricciosa consisted of tomato sauce, ham (prosciutto cotto), mushrooms, red onions, marinated artichokes, and Quebec mozzarella di bufala. All the toppings were deliciously fresh but the crust was the same, too thin to hold the heavy toppings and fell apart when trying to cut it.

I prefer the crust a little thicker and chewier. With pizza the flavor is mostly in the white fluffy dough. With the right toppings like these, the taste would have been heavenly. By now I was getting lockjaw with all the heavy chewing and breaking apart.

To complete our meal we had for dessert a Costarde Garnie-Frozen custard ice cream- with chocolate sauce for $ 6.50, it must have been sitting out for too long because by the time it came to the table it was semi melted with hardly any discernible chocolate sauce topping. A bit of a disappointment and very different from the perfect meal we had at its sister restaurant Impasto located across the street.

As for the service our waitress was more than accommodating at the beginning of the meal. After ordering our meal, we did not see her much throughout the service and we kept getting served by different waiters. The service was a little erratic and amateurish. The bus boys kept filling our water glasses every two minutes and interrupting our conversation. Service felt rushed.

Nonetheless, Pizzeria GEMA has a young vibrant atmosphere. With all that in mind, Gema can be fun and if you like thin crust Neapolitan Pizza, the sauce and topping are exceptionally fresh and tomato sauce authentic.

During my visit last December at pizzeria Napoletana, I was totally disappointed at the quality of the tomato sauce and ingredients. It was probably my last visit, because if I need to go have thin crust pizza anywhere, might as well go to GEMA, at least I get excellent top grade ingredients. Could not help notice either that the line ups at Napoletana for a Saturday night had dwindled. Quel dommage, vive le nouveau Roi des pizzas!