With time things do change, the last time I ate Kanda Sushi on Boulevard St Jean in the West island many years ago upon its initial opening ,I was not too impressed. The sushi was not fresh, and other dishes were not comparable and I never returned. Meanwhile all you can eat Sushi restaurants began popping up all over town. A few years back it had become all the rage among the young millenniums and the trend seems to be going strong with no imminent end. I have been to some very good ones that are mostly situated in the new Chinatown, a stretch on St Catherine between Guy and St Marc in the downtown core. For the perpetual foodie, these types of restaurants are considered a casual eats. Unless you are eating at Park or Jun-I, where Sushi is more of an art and you are being served by the masters and every morsel has been carefully thought out.

Last October 2015, I heard that Kanda was moving from St Jean Boul. and opening up shop in Galeries des Sources. I was still not too impressed and I kind of stayed away. West Island has a handful of good all you can eat sushi restaurants; some are good and some are really bad, basically they have replaced the Italian eateries and Greek brochetteries that once lined the boulevards of this suburb. Therefore Kanda in my books was just another generic all you can eat franchise specializing in Sushi and Pan Asian food, making six branches throughout Montreal and outskirts.

Recently Kanda Sushi was suggested for lunch, not really having a choice in the matter as majority won, I decided to tag along and join in or eat alone. For $ 15.99 all you can eat lunch, I couldn’t go wrong. A Tim Horton sandwich would have cost me $ 10.00 plus tax anyways. So I decided to splurge. 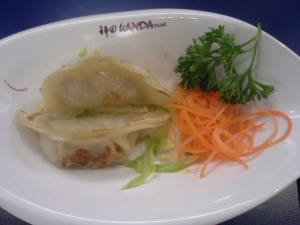 You can find Kanda on the outside of the mall, a door away from Maison Corbeil. Not ideal in terms of locale, but once inside, it is totally modern and hi tech, something that will appeal to many millenniums. They also have tablets for menus instead of the old paper ones where you can order your food from. You have a choice of as many dishes as you want and its served tableside. No need to get up and go serve yourself like yester years. The décor is very lively and upbeat. The seating is a hue of red and blue leather banquettes and tables. The service is speedy and efficient. You will find all your favorites dishes, starting with any type of sushi and sashimi, soups, appetizers, teriyaki and tempuras. As well as some basic Thai and szchecuan dishes.

You can choose the portions based on the number of people you are. The portions are small and enough for one person, so make sure you order two portions if more than one person wants the same item on the menu, cause one is not enough to share. You can order as many times as you want. Kanda is also BYOB so don’t forget to bring your favorite sake. 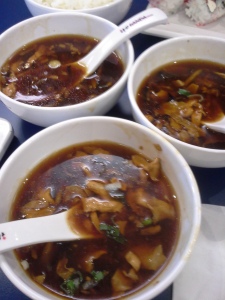 In the evening the price increases to $ 25.50 per person, but it is still worth your while. Soft drinks are additional and some desserts like Fried Banana will cost you extra on your tab. Also anything that is not completed will cost you $1.50 on top of your original cost. Do not over order and no doggie bagging allowed or this is considered take out and it will cost you additional as well. 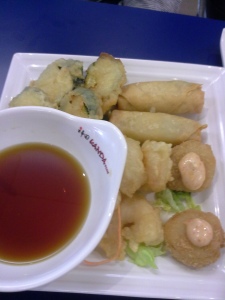 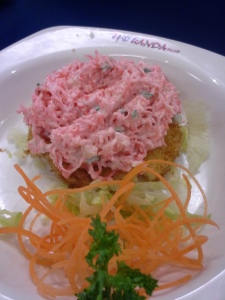 After that fateful day, I have visited a few Kanda Sushi around town and not all work in the same manner and not all are of the same quality. In June we visited the one on Decarie and were a little disappointed in terms of quality and service. I prefer the Dollard branch it seems more with the times and the food is decent and service friendlier. It also has more of a family atmosphere especially on the weekends with their large screen TV’s and lounge music. Not for those fickle at heart. It can be disturbing on the senses for some. But for a casual in and out lunch, it’s just perfect.

Bookmark us on Zomato