It was time again for our annual family get-together. This year we were a big group with 25 people in attendance and we chose a restaurant that was synonymous to family. We wanted a place that could accommodate a large group, serve Italian food & that we could bring our own wine. So we chose La Famiglia on St Charles Boulevard in Kirkland after a unanimous decision. We only had a handful of places to choose from in the West Island that would accommodate all our needs. La Famiglia was one of the restaurants that came up and seemed appropriate for many reasons.

La Famiglia is a cozy, casual family-oriented restaurant serving mainly Italian food. Not much has been written about it, it does not have a known chef manning the kitchen. It is basically just a local eatery where most West Islanders go for classical Italian food. This was not important to the family as we care more about spending an evening with family then with the logistics behind a place. One thing the family does demand is good food.

La Famiglia is a busy restaurant especially on a weekend night. You can feel the buzz of the crowd at the door starting with the line ups. The ambiance is loud, not quite the place for a romantic date, but more for loud family or group functions. Reservations are highly recommended to guarantee a table.
We had reserved seating upon walking in; set in the middle of the restaurant a long table that felt very Roman Trattoria like. A long table set for a big group.
I must say that the service was very fast and courteous; they opened our wine bottles and brought us the menus immediately. They came back shortly thereafter to take our orders, and we were all served our meal as the same time. An accomplishment in itself.

We sampled for starters, a Insalata mista, a Insalata Cesare and calamari fritti, Polpette della Nonna, Cozze, and a Portobello alla Griglia, ranging from $7.00 to $15.00.
The salad was generous portions and well seasoned to taste. The meatballs were good but not the freshest, they had been sitting in the sauce for a while, the mussels were decent but also not the freshest and the sauce that accompanied them had no outstanding flavors. The fried calamari was a mix of tender and crisp morsels, accompanied by a tomato sauce for dipping. The Portabella alla Griglia was not presentable. It looked like mashed mushrooms with Arborio rice. Instead of chunks of sliced mushrooms it looked like mushrooms had disintegrated into mush, the taste was bland, presentation was not appetizing. I would definitely would not order this, very disappointing. Something definitely went wrong in the kitchen. 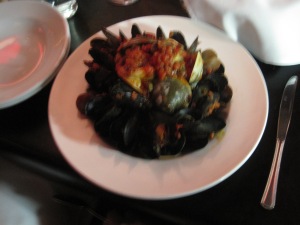 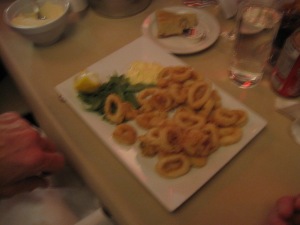 On the next round of dishes, were not better. We ordered three pizzas, the Speck and Arugula, for $18.00, which was good but lacked the oomph in the dough. The Caprina with goat cheese and red peppers for $19.00 fell flat. The Margherita pizza for $15.00 ordered for the kids was cold, tough and flavorless.

The pastas dishes ordered were Gnocchi al la Gigi for $18.00 and Gnocchi Rose sauce for $ 17.00. I liked my Gnocchi al la Gigi. The gnocchi were not homemade and ultimately fresh, but it was edible. The gnocchi with the rose sauce tasted frozen and were served cold. The Penne with Sausage and Rapini for $ 18.00 only warranted a “I had better comment” and Penne Bolognese for $ 15.00 and a Spaghetti al Pescatore for $ 25.00 also were deemed decent but not outstanding. 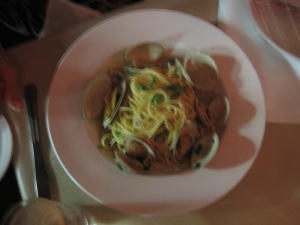 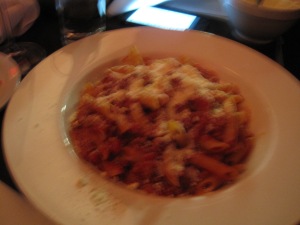 So far the family was not impressed in the food department, but that did not matter as we were so busy chatting away.

Also ordered were the Chicken Parmesan at $ 22.00 and the Veal Limone for $ 25.00 and Entrecote for $ 30.00 which was of medium quality. Although edible, the dishes were truly not authentic. The sauces were generic tasting and the quality somewhat inferior. The Entrecote priced very high was not grilled accordingly and left much to be desired.

All in all, a good time was had by all. Most of us were full and opted out for dessert only one person ordered Tiramisu for $7.00. Just some cappuccinos, tea and espresso to cap off the night with more chit chat and stories amongst the family.

Find us on Zomato