A special birthday celebration deserves a special venue. Auberge Le St. Gabriel is just the type of place for that special historian in my life. While doing research on the history of Montreal, she discovered that the Auberge Saint Le Saint Gabriel was the oldest Inn established in Quebec circa 1754. In the 1900 it was restored by Ludger Truteau and renamed Auberge Le St Gabriel. Since that time it has changed owners a many times and today as we know it was purchased a few years back by three iconic Quebecers, Rocker Garou, Guy Laliberte of Cirque du Soleil and Marc Boulay. With talent and resources abound they have managed to change the image of Le Saint Gabriel with the opening of The Velvet club , as not only a historic place to dine, stay and relax, but a trendy spot to celebrate any occasion, from Grand Prix in June to New Years Eve with its cool thematic parties.

In the summer it has a private terrace away from the hustle of the busy streets of Old Montreal, where you can enjoy a quiet dinner or drinks. The Inn is ideal for a staycation, completely renovated; the place takes you to back to bygone era of Nouvelle France with its dark cavernous halls, wood beams and brick walls. The place has a mysterious aura and some say it is haunted, with an actual citing of a ghost on the third floor who walks the reception hall.

I had a difficult time taking any kind of pictures while I was there, it was either too dark or I kept getting shadows of white auras flash across my pictures. Long before I had read and researched the ghost story, I mentioned that evening that I got an eerie feeling and felt the place was haunted. Of course I was dismissed with a few rolling of the eyes; and my comment was totally ignored. We were not going to let a few spirits ruin our evening as it had started out perfectly, by being greeted at the hotel entrance by valet offering to park my car. 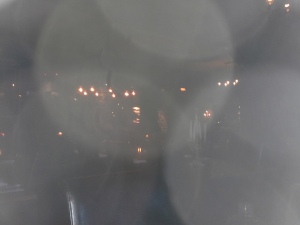 This evening we had the privilege of having Coco with us. It is a rare occasion that she blesses us with her presence and it is always a pleasure to have her enjoy a good meal with us.After briefing her on the history of the Auberge, we were greeted by our hospital waitress and seated in Sabrevois Hall; a dark cavernous dining hall which I discovered was re-designed by Bruno Baen who was also the designer for Club Chasse & Peche. The two restaurants look identical; similarities can be found with the dark themed medieval décor, dark leather chairs, heavy wood tables and dark flooring. The massive stone wall back drop and wrought iron turn of the century chandeliers are a recurring theme in both restaurants.

We were brought our menus and wine list immediately. Our friendly yet professional waitress recommended a bottle white Sancerre, 2013, from Loire, France at $ 90.00. I later discovered they were probably pushing the Sancerre which was leftover from a prior event . Nonetheless the wine was good, it was light and crispy, with citrus notes and very refreshing to the palate. Brains really liked it and she chose to go with white this evening, being her special day. 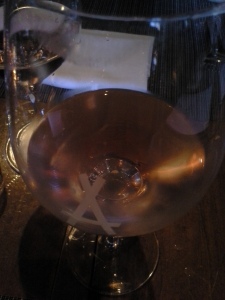 After scanning the menu quickly, it was not difficult to make our choices. It consisted of all our favorites along with many classical French Bistro fare.
We were brought our wine immediately and a wooden boxed bread basket that had a variety of ficelles and sliced baguette. It was refilled continuously throughout dinner without question.

We started with our favorites and our usual Salmon Tartar at $ 14.00 and the Terrine de Foie Gras at $ 16.00. The tartar was fresh and savory, mixed with avocado it hit the spot. The Foie Gras which came served on a slate with a dab of sweet chutney was minimal and a little too chilled, but it did not take long to get it at room temperature. Both were unctuous and very tasty and always a good start to any meal.

For two of our main meals, Brains and Coco ordered a plate of Cavatelli pasta made with ricotta and Rapini for $ 25.00. Coco is quite adept at making this dish and was curious to see if it matched her method. She was surprised to see that the Cavatelli did not resemble anything like the ones she made. 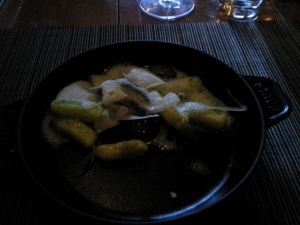 Instead they resembled large gnocchi in lieu of the small sized Cavatelli she is so used too. Also made with a mix of pureed ricotta cheese and rapini, they were green in color. Her dish contained but a few pieces of rapini on the side; not served the typical Italian way, which usually has copious amounts of rapini on top or mixed in with sausage.

Instead they came topped with a schiuma “foam” and slivers of parmesan shavings. Different she thought, but she enjoyed them nonetheless and learned something outside the realm of her typical Italian box. We always enjoy enlightening her and seeing her marvel at different food.

I ordered the Pot au Feu for $ 29.00, which was a big dish for my standards. A little disappointed with my meal as I found it flavorless, but then what did I expect from boiled dinner. I have got to say it not one of my favorites. I like anything with red wine inductions and with more flavors. The consommé was too generic and bland for my liking.

I bet if Eric Gonzalez was still Executive Chef at Le Saint Gabriel, things may have been different with my Pot a Feu, as he would have changed things up a little. But he has since been replaced by Ola Claesson, a native Swede coming from a line of chefs; he has worked in Paris at Meurice and Le Pre Catalan, and has a passion for Quebec Market cuisine and our local products. Therefore my Pot a Feu was as classical as it can get. So I am pleased in this respect that I got to sample it.

The Tourteau au Fromage, resembled a Boston cream pie filled with mascarpone, with quenelles of vanilla ice cream, compote of fresh strawberry and coulis. The presentation and freshness were good. The vanilla ice cream also resembled the Tourteau platter with a more strawberry compote and strawberry ice cream on a bed of crushed nuts. A little unimaginative I thought. The dessert platters were similar in construction; a little variation was in order.

Overall, I enjoyed the meal and the ambiance. It had become hipper to dine here as it started to fill up with late night patrons. The music got louder and the terrasse filled up with tourists looking for a bite to eat. After our meal we walked around the Velvet and imagined what a New Year’s Party would be like here and vowed to give it a try soon. The mysterious aura would make for a good party, but one thing this Foo-Foodie will say, you would never catch me sleeping here at the Auberge or having an event in the third floor reception hall. I am too superstitious.