My first experience and introduction to Syrian cuisine occurred at Alep Restaurant on Jean Talon back in the mid 80’. Then Syrian food was considered exotic and obscure; Alep was one of the first and only places to eat this type of cuisine in Montreal. At the time there was but a handful of fine dining Persian and Lebanese restaurants. Starting to pop up here and there were the many fast food Middle Eastern chains like Basha, Amir & Boustan that served chicken and beef on a rotating roasting spit, sliced and served on pita with a yogurt, garlic sauce and hummus and coined shish taouk and shawarma *. As a side you were able to sample cheaper version of hummus, Fattouch salad and Middle Eastern desserts. But this was not comparable to fine dining establishments that were spewing out a more palatable authentic version of these fast food variations.
Alep was considered fine dining in those days. My distant memory recalls it being heavy on harissa and lamb dishes. I was not accustomed to the different flavors, and found the heavy laden harissa dishes kind of pasty.

In the years thereafter, we became big fans of Middle Eastern and Persian food, with its mint and cumin infused dishes and pilafs, sweet salads with sprinkles of pomegranate seeds and purees from hummus to babaghanouj.

Then I heard that a restaurant by the name of Damas was making waves on Park Avenue cooking really good Syrian food. I wanted to revisit the idea and placed in on my bucket list of restaurants to try. I never got to go to the location on Park Avenue as it burned down shortly after, but I jumped at the chance when I found out my dining group was going to the new rebuilt Damas Restaurant on Van Horne Street in Outremont. Who wouldn’t want to dine in fancy Outremont with its happening Bistros and current in mode restaurants where you can find the likes of Denis Arcand and local politicos of the day.

I was a little intrepid venturing out on my own this evening, but I put on my big girl pants and ventured out to discover Damas. It was all smooth sailing and upon walking into the restaurant, I felt that I had been teleported to the land of Damascus with is haremesque dining room, red draped ceilings and multi shaped Christmas ornament chandeliers. Everything blinged, from the floor to ceiling, with its glass wine cellar and mosaic tiles that were reminiscent of foreign lands. I felt I had entered a beautiful room in a sheik palace. 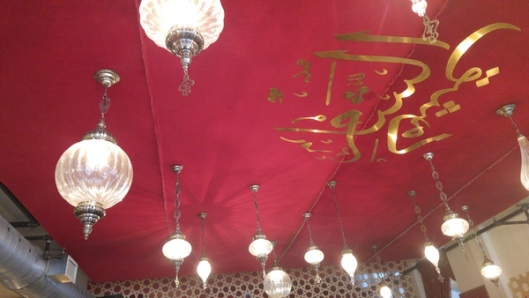 Feeling nervous this evening I did not have much of an appetite and not much of a budget. After scanning the menu and wine list, I decided to start with a MacTavish Beer-Trou du Diable for $ 9.00, a salad of Fattouch for $18.00 and have another entrée of lamb kebabs called Kebab bil Karaz for $ 21.00. 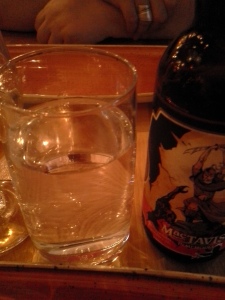 We were served bowls of olives which is traditional in most mediterranean restaurants while we ordered our drinks and cocktails. 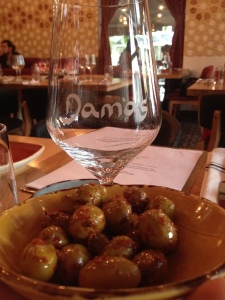 The waiter suggested that since the portions were large, the mezzes were meant to be shared; we should choose four among our group of four persons.

The other two choice of mezze was a Traditional hummus for $10.00 and a Beef Tartar (Kibbé Nayyé) for $ 17.00 that was not shared.

The Fattouch salad was very generous and has got to be one of the best ones I have ever had. The combination of flavors and ingredients, made it so refreshing it contained a mix of radishes, fennel, pomegranate seeds, mint and small crispy bits of pita, all the flavors of the Middle East and it was totally addictive and satisfying.

The entrée of lamb kebabs with sour cherries and pine nuts was also really tender and tasty, with a variation on texture and flavors, not overly sour and overbearing, but the presentation left much to be desired. 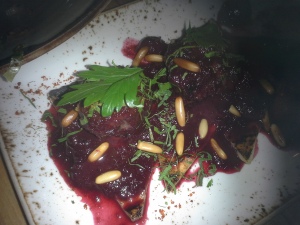 The hummus was delicious and creamy, it contained texture and crunch. It came with dollops of sour cream; sprinkles of pine nuts and drizzle of olive oil, it was served with extra pita bread. Also one of the best I have tasted in the city and very different in presentation.

The Kibbé Nayyé was quickly devoured and although I did not get to sample it. I was told it was very good and different in flavor.

This is where it gets confusing, the rest of the dining companions ordered mains, which consisted of a dish called Bamia for $ 37.00, (a stew of braised lamb served with okra, prunes and apricots and rice).

A Fattet Mozat for $ 39.00, (lamb shank piled high with a mix of grilled vegetables, dollops of yogurt sauce). 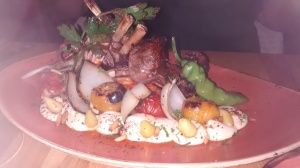 A Shish Taouk de Damas for $ 35.00, (chicken brochette with fries and garlic sauce)

and a Kebab d’Alep for $ 35.00 which consisted of skewers of kefta lamb with pita, frilled vegetables.

A second lamb kebab was brought for me, which I did not order. Apparently, the waiter understood I wanted an entrée and main meal. After a little bit of explaining, he kindly returned to the kitchen.

Everyone enjoyed their meals whole heartedly, and were amazed at the portions and flavors, all except the lamb kebabs that were a little on the oily side. Everyone really liked the mix of flavors. Some found it heavy on the cream sauces and would have preferred less. But whatever way it went, all found the meat to be very tender and grilled to perfection. We were all so full that most of us opted out for dessert.

After reading up on the reviews, I discovered that chef Fuad Alnirabie, a Canadian born Syrian, who also co-owns Kaza Maza on Park Avenue, has no formal professional culinary background. Yet he captures in his menus and plates, the beautiful diversity of Syrian cuisine. Using fresh local produce and imported flavors and spices of his homeland; he creates simple yet intricate dishes that look like gorgeous delicacies and a mix of very skilful concoctions of fine Syrian food.

Damas is a force to be reckoned with and a must on any foodie list, from décor to ambiance to fine professional service. It is one of the best underrated tables in Montreal. The prices are steep, but portions are huge and if you are not a big eater, then sharing a convivial meal here is the norm. The atmosphere is festive and loud but if you opt for a quiet atmosphere you can always sit out on the terrace in summer where you can enjoy a meal al fresco.

Tidbit ** Shish Taouk is synonomous with Montreal, the owner of Basha -Abdallah Akkouche named it such usually it is called Chicken Shawarma in Lebanese culture.