While we were all hibernating in winter of 2016, a new boutique hotel called Hotel William Gray quietly opened in the heart of Old Montreal by the reverable Atonopolous group. Hidden on a narrow cobblestone street at 421 rue St. Vincent, which resembles more of an alleyway than a street; you would surely miss it if you  would not be walking by on foot. Attached to the hotel is restaurant Maggie Oakes which opened shortly afterwards in summer 2016.

Deemed a heritage site, the hotel is integrated into Maison Edward-William Gray which was erected in 1773. It expands to the end of the block width wise and spills onto Place Jacques Cartier with its large terrasse. You can access Maggie Oakes directly from the square or you can go via the hotel , arrive in style and get the valet to park your car inside for a reasonable fee. The restaurant is named after Edward William Gray wife Maggie Oakes. She came from the first family of fur traders who had arrived in Quebec back in the heyday.

Manning the kitchen at Maggie Oakes is executive chef is Derek Bocking who has worked at restaurants like the Globe, Icone, Pois Penché and Chez Ma Gross Truie Chérie. In 2011, he was also a Top Chef Canada contender and he brings lots of experience to the table. The night we were there we were told that Mixologist Jason Griffin had also just returned from the Grey Goose Pourmaster competition where his signature cocktail Bonbon Americain had won accolades.

The restaurant is stunning with its Art Deco theme and its green live wall. Sleek in design with a mix of black and wood tables and leather seating, it  is a blend of old and new. It has wood paneled walls and some old mason stone walls,  a long marble inlay that seperate the room. A glass floor to ceiling wine cellar, a modern bar and subdued lighting. Not only is the space functional but pleasing to the senses.

The rest of the hotel design follows the same principles, a mix of old and new world themes along the same lines; a newly constructed glass exterior facade along old stone brick homes, melding the two as though they belong together. From the lobby you can smell Europe and Italy with the strong aroma of espresso permeating the lobby,  and emanating from the second installement of Cafe Olympico that is accessible from the hotel lobby.

The live green wall at the end of the restaurant also adds an eco-friendly theme to the overall look and respite from the concrete slabs and cobblestone streets of old Montreal. All the garnishes come from here and are available year round. 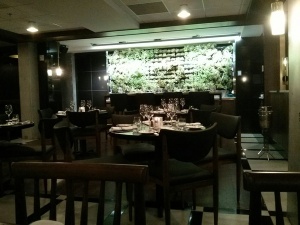 A glass case exhibits beautifully aged meat and showcases some expensive choices like the Tomahawk at $110.00 and a variation of other cuts. Just ask the waiter he will be pleased to go into details about what is available. Maggie Oakes optimizes class, evoking a mix of old and new and it comes with at a hefty price. 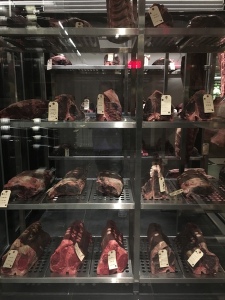 We started this evening with a pint of Grimbergen beer for $12.00, a Belgium blonde fruity and light with hints of sweet and bitter and a Bourbon Americain for $15.00 a mix of Grey Goose Vodka, Sherry, Fruit liqueur and verjus; worth the price very refreshing and a sure winner. A glass of Lamay Latour Bourgogne was also ordered for dinner for $11.00. 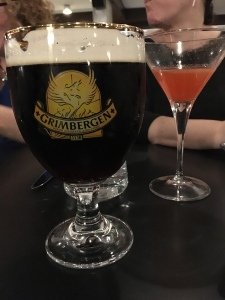 For Entrees we sampled a phletora of items. I started with my favourite Tourchon de Foie Gras for $16.00, it was perfect and of good quality, slightly chilled and served with country bread and grain mustard.

Maria & Lina had the seasonal salad of duo of bettraves with roquette, walnuts and fromage de chevre brulee for $12.00 was a mix of red and yellow roasted beets, with a two generous portions of grilled goat cheese, served with walnuts and arugula. 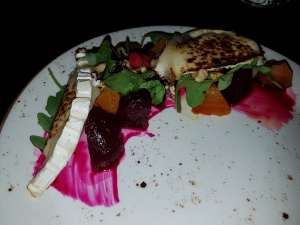 The trio of Albacore Tuna Tartar for $ 15.00 which was presented atop a base of sesame vinaigrette, with dabs of smoked carrot coulis, topped with pine nuts and a mint garnish; original in presentation and flavour.

Also ordered was a Crudo de Petoncles in lemon, lavender, radishes and cappucine leaves for $18.00 . It was a light and but very aromatic.

Helene had the Tartare de bison for $ 16.00 served with Caramelized cipollinis, aïoli à la citronnelle, with bonito flakes served with baguette crostini. She enjoyed the flavors of the bison meat, not gamey at all, and he caramelized onions and aioli complemented the meat and raised it to a different level. Although she felt the portions were small and could have had one or two more rounds. 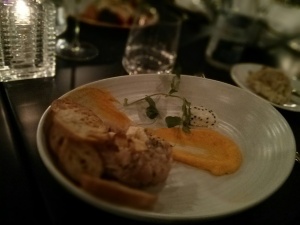 For mains we sampled, the Sweet Potato ‘‘manicotti’’ for $19.00 which was one of two pasta dish on the menu made with homemade ricotta and grilled red pepper sauce, it was sweet and packed with flavor. The ricotta was fresh and silky and the red pepper sauce packed a punch.

Donna had the grilled Artic Char with a base of quinoa, peppered squash, green beans and a salad of fennel and Italian sausage of soppressata for $ 28.00. We did not see much Sopressata in the plate and were wondering if it was hiding under the fish. The dish was good minus the Sopressata. Lightly infused with anise flavors and cooked to perfection. 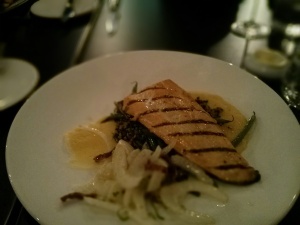 I had the Grilled Bavette for $ 26.00 it came with a green tomato chimichurri sauce and home crispy fries on a bed of fresh vegetables. I really enjoyed my Bavette as it is an inexpensive cut of meat and if not overly done can be very tender. The chimichurri sauce gave an otherwise bland meat an added kick. The Bavette came served a perfect medium rare and hit the spot.

Also sampled by Trinadad was the Veal short ribs infused with smoked maple, atop a celery root puree and Market vegetables and a Bouillabaisse of mussels in clams in broth for $ 26.00. 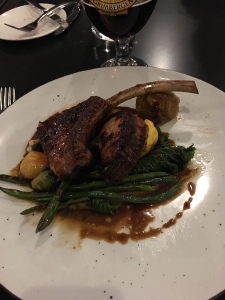 Also ordered was a Bouillabaisse in  fish broth  with ample fresh clams and mussels.

Marie Helene had the Burger Bulleit for $ 19.00 a fair price. It was served dressed with Sauvagine cheese, Kumato tomatoes, and Bourbon glazed onions and homemade fries and ketchup. The burger was a little undercooked but was to her liking. The meat was ground from aged Angus chuck and was not overly dry. The cheese added a twist from the usual cheddar and the onions sweetness against the acidity of the Kumato tomatoes. A good bet for those who just want to have a good burger.

Desserts sampled was a slice of Chocolate Cake with Strawberries, a large piece of chocolate cake topped with strawberries, an Apple strudel made with two puff pastry shells topped with apples and ice cream and Pudding Chomeur that was to die for and served in a cocotte ceramic bowl, and a Coconut tartuffo that was decadent. All desserts were between $10.00-12.00 each and coffee and tea was not included in the price. 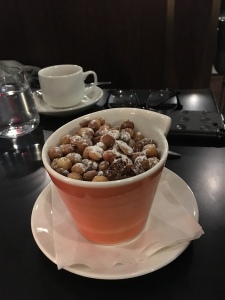 The service at Maggie Oakes was professional and friendly, the knowledge of the waiters and waitresses is exceptional, and they are well versed in the menu and make the experience fun and entertaining. We also received a complimentary glass of Prosecco with our dessert, which was unexpected. We had a wonderful time with great company and lingered till past midnight exchanging stories. We were not rushed and never asked to leave. The atmosphere was welcoming and we continued with more drinks until it was time to go home.

Ending today February 5th  is the 2017 Happening Gourmand festival and a three course meal will only put you back $ 30.00. It is worth to going this route for the budget minded individual in the future, it is an affordable way to sample this first rate restaurant. But if you feel like splurging , going à la carte is the best way to sample some very fine cuisine.