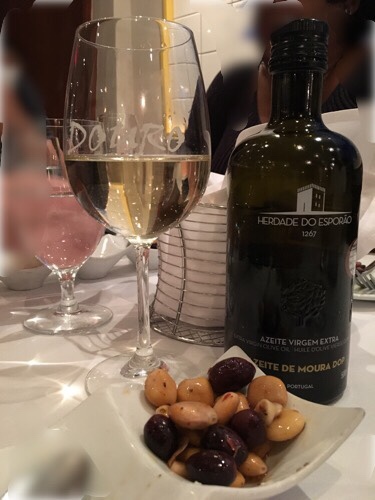 Restaurant Douro located on upper St Laurent Street in the heart of La Petit Patrie / St Edouard is going into its 12th year of operation this year. Flying below the radar, no one would expect to find a Portuguese restaurant in Little Italy. We are so accustomed to finding many of them lower on the Main in the Plateau. But Douro is very competitive in comparison to the Old Portuguese restaurants of lore. It has a modern twist, modern décor and a good menu with all the old typical Portugeuse classics.

Upon walking into Restaurant Douro, I found it to be very reminiscent of Café Ferreira on Peel Street when it first opened many years ago. With its blue & white tile mosaic wall, it felt like more like a sister restaurant but at affordable prices. In the evening the restaurant is well lit and bright; it has a clean crisp fell to it with its white walls, trimmed with yellow and splashes of blue. A fine dining establishment with white linen covered tables and wooden chairs; it takes us to the lands of oceans and sun. The menu boasts a good mix of fish, seafood and grilled meats and all the Portuguese favorites starting from Tapas to Grilled sardines, Bacalhau Potato Croquettes , Lobster and Shrimp, Caldo Verde soup , Pork and Clams, Grilled steaks ,chicken and heavenly desserts to boot, and of course the proverbial Portuguese favorites natas. We received copious amounts of food and everything tasted on par and authentic.

The wine list has all the Portuguese favorites and heavy on the wines of Douro. I opted for my usual a glass of Vinho Verde by the glass for $.12.00 but got a Douro Duas Quintas-Ramos Pinto 2014 –instead. It tasted different from my usual vinho verde, but I did not question it as I preferred it instead. It was crisp, light and refreshing a good start with my entrée of tapas. My fellow dinners ordered a bottle of Periquita, which they enjoyed very much and Super Bock Beer. 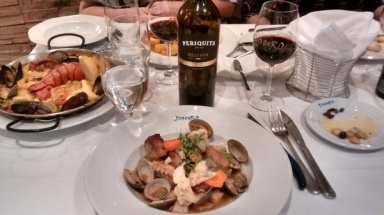 Service I must say was not top notch, I waited about 15 minutes at coat check and no one ever came. I then decided to bring my coat with me to the table and hooked it behind my chair. Everyone seemed too busy to be accommodating. Our boisterous waiter was very loud and nervous, maybe it was his first night on the job he kept going back to kitchen halfway between sentences, like he was checking on things and was not sure of the menu.

We were served olives  and cheese as an amuse bouche for all to share and good Portuguese bread with olive oil for the table.

We placed our orders and our meals a mix of entrees and main meals arrived quickly. The presentations were lovely.
A few of us had the Soup of the Day as a starter which was a cream of watercress, their version of Caldo Verde for $ 5.95.This was light and creamy but lukewarm. It lacked a little flavor. 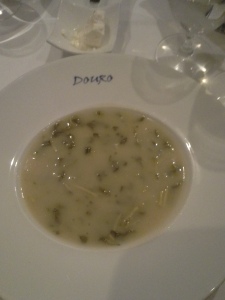 I ordered two entrees this evening and opted out for a main meal. My entrée of mixed tapas for $ 27.95 was served as a main with the others. This came in a sectional plate with garlic shrimp, grilled calamari &, sardines, chorizo, cod ball croquettes and shrimp patties. The mixed tapas platter allowed me to try most of the entrée items listed on their menu. They were all very delicious and flavorful and filling. The Cod fish croquettes my favorite were perfect, they were not fibrous, overly fishy or oil laden or greasy. 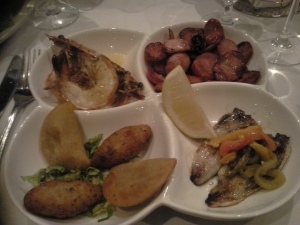 The shrimp patties were just as good and different, a first for me. The portion of large shrimp, a meal in itself and the sardines, which are not one of my favorites, were tasty and not too salty. The chorizo which was lightly grilled was just as satisfying and with the good portugeuse bread was too much for me to finish.

Most of my dining pals ordered mains only. We had a mix of dishes but well rounded choices.The clams were plump and not too garlicky, a generous portion with a wine jus, that was just heavenly.The grilled calamari had come highly recommended and beautifully displayed did not disappoint either. Served whole and grilled with a mix of sautéed vegetables, the squid were beautifully browned and tender this also cost $ 27.95.

Main courses turned up one winner after the other. The seafood Casserole was amazing. Served in a steel dish casserole, the seafood rice was a stunning dish served in a portion that would easily satisfy two people. The broth was heavenly, the rice was flavorful, and the amount of fresh seafood was outta this world. Topped with a two scrumptious lobster tail, the dish included pieces of tender codfish, small scallops, clams, shrimp, squid and mussels. The dish is pricey ($44.95), but the portion size and the amount of seafood was a deal, especially if shared by two.

The grilled Portuguese-style chicken for $ 22.95 was a little steep in price compared to other counterparts, but it was perfectly grilled and tender, it came served with a nice green salad, and fresh vegetables and a side order of crispy fries and piri-piri sauce. 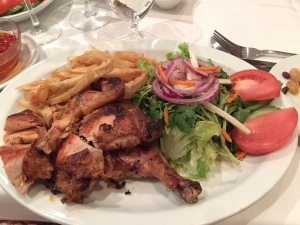 Other items on the menu ordered were the Mussels, Rabbit stew with Potatoes and Pork and Vegetables. 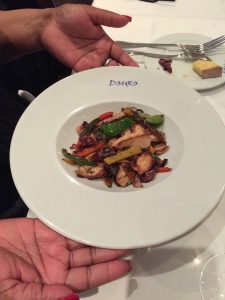 All dishes sampled were to everyone satisfaction and no complaints at this table.

For desserts I had a usual espresso and Douro’s traditional Pastel de Natas for $ 3.50 each. This is a traditional portugeuse custard tart, made with egg custard, which are at their finest here. Freshly baked and served warm the filling was melt in your mouth perfect. Order two as one is not enough.

The piece de resistance and a must is the Natas de Ceo” Natas from Heaven”. A vanilla pudding flan served in a glass goblet and sprinkled with cinnamon sugar and a strawberry coulis . If you are the pudding aficionado, it is a combination of explosive sweetness; creamy, smooth, eggy and sweet. 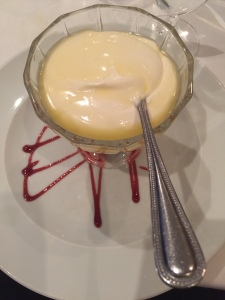 I enjoyed my night at Douro and wished I would have had the appetite to eat more. But I did manage to sample a little of my dining pals dishes, which left me craving for more. The only thing that threw me off was the service, how can such a well rounded establishment miss the mark and lack professionalism. To differentiate yourself from all others, you have to offer what others do not. The prices are not cheap and Douro is definitely fine dining. I loved the décor more than any other Portuguese restaurant of late. But the service left me disappointed. I would return maybe in distant future, it is a good restaurant. But next time, I’ll settle on the seafood casserole to share.