After all the bad reviews, I was wondering why we were going to Les Enfants Terribles for Red Vixen Birthday. She was much more deserving and with such fine taste, I was wondering if she was losing her fiery touch. But the birthday girl gets what she wants, so all her pals headed to Place Ville Marie to try the new branch of Les Enfants Terribles. Let me say we were not expecting fine dining. it is, after all, a brasserie or Gastro pub, as you may want to call it. But you will find lots on the menu to satisfy any foodie and the most simplest of palates.

This evening, we made the trek up the elevator and followed the black hallways to the upper floors which threw us back 30 years ago to the days when disco dancing was all the rage and we would flock to Altitude 737 to dance the night away to the strobe of the floodlight atop PVM. I had forgotten how nice the view was and as soon as the doors opened we ran outside to admire the city. It is a prime spot for terrasse dining and drinks ,weather permitting, today it was not. So we headed inside after some picture taking.

The decor and layout is stunning. We were greeted by floor to ceiling glass doors and wine cellar and a charming hostess, who was positioned at the entrance. We got seated at a long table in the center of the room with big silver candelabras. Chic I thought! The view was just as breathtaking inside as well as out and everything shone with the sun descending and hitting the windows in a particular light. The place is fun and has a particular buzz; it was classy yet casual and filled with all kinds of people young and old. They have a bar, if you choose just to go for drinks. 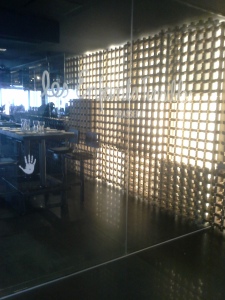 Service was speedy and efficient and we had no qualms in that respect. They took our order for drinks almost immediately. Our waitress Audrey was hospitable and accommodating. We ordered a bottle of Langhe 2015-Nebbiolo- Produttori Barbaresco for $ 58.00 to be shared by two, and a margarita cocktail for $12.00. Both were to our satisfaction.

Three of us decided to share our entrees and the tab, so we ordered our proverbial favourite and a must when on any menu the salmon tartare $ 15.00. It came served on a bed of guacamole with two fried wonton noodles as garnish instead of bread. The entree was good but we got two bites each and it was gone.

Vixen had her favourite Beef Tartare entree also for $ 15.00, made with AAA Grade beef, with classic dressing and crispy parmesan shavings, and baguette rounds. It was not the best she had but decent.

The third entree was a semi -Grilled Octopus -$ 27.00. Served with lime aioli and chimichurri sauce. A little chewy, but a generous portion for an entree. Larger portions can be ordered as main meals for $47.00.

A platter of a dozen oysters was ordered for whomever wanted to partake. Served raw and naked on a bed of ice, they came garnished with lemon wedges and a spicy sauce. These were fresh and the lemon wedges and spicy sauce a good accompaniment and a must if you wanted any sort of flavour. Such an aphrodisiac, I could have eaten all of them. 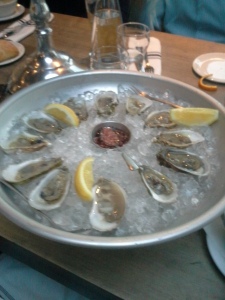 Our friend Adri, who wanted something smooth, ordered a potato leek soup for $6.00. Served with chive garnish it was creamy and velvety and had the right blend of oniony flavours. She said it hit the spot, a sort of comfort food for her. 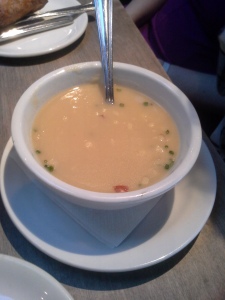 Also ordered was the Fried Calamari for $ 15.00 which was a little sparse and chewy, not the best ever sampled. They also came served with lemon wedges and a smear of tomato aioli sauce, instead of the usual dipping tub. But it was suffice to complete the calamari adding flavour to an otherwise bland dish.

For our main meals we ordered a Sterling Silver Beef flank steak with a mix of Fries and salad for $ 30.00, shared by two, with and additional salad for $ 6.00. It came served with Maitre d’hôtel butter, homemade fries and gravy with an additional mayonnaise on the side for the fries. I enjoyed this cut of beef very much; it was of good quality, well grilled, tender and not overcooked. There was no fat and very flavourful with the beurre on top. The salad was not much to write home about, a classic green salad with garnishes of radishes; it was well oiled and seasoned. The fries not the Belgian frites type were sort of generic and not as crispy as I would have preferred. They came served in a bowl and were sparse especially if shared by two. The presentation could have been nicer, a cone container would maybe have done them justice, but at least they did not taste rancid. 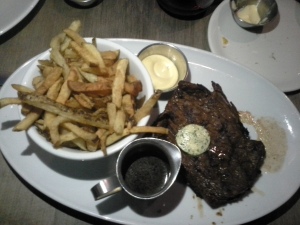 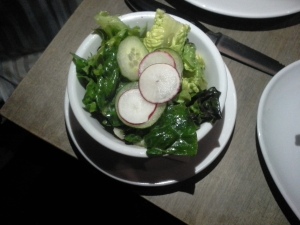 Vixen had the Kamouraska Lamb Keftas- $24.00, two patties shaped latkes, layered beets atop crispy vegetable salad topped with labneh with Sumac –espelette vinaigrette. It sounds better than it tasted, presentation was minimal. The lamb was good and the beets and labneh idea was great, the sumac espelette flavour was lost in the dish. 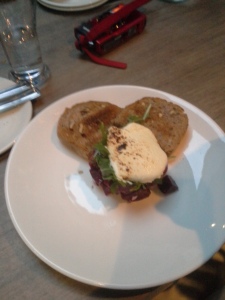 Also ordered was the Rack of Ribs-$25.00 (not shown) made with Rang 4 Pork served with side of fries and coleslaw. The ribs were fall off bone tender and slathered in homemade BBQ sauce. Fries were a generous portion served alongside the ribs. The vinaigrette coleslaw was served in a tall glass; it was a little generic tasting but edible.

Our friend Tomtom ordered the fish and chips for $19.00. Two codfish sticks battered in crispy panko style breadcrumbs and also served with a generous portion of fries, coleslaw and lemon wedge as garnish. He found his fish to be but lacking in flavour thus the oomph factor was not there. This can be said about all the food at this branch of Les Enfants Terribles. One must remember it is a brasserie and good times are more to be had with food taking the backburner and being complimentary to the drinking. 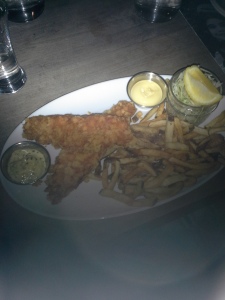 The reason why we came to Les Enfants Terribles at Place Ville Marie was more to share good times with friends, and to celebrate this special occasion. Prices were reasonable and convenient for all, and we wanted to experience this landmark establishment in its new form. The Altitude 737 which closed in 2013, died like a piece of our past.

It is always sad to see a landmark disappear from our beautiful city. But its re-opening as Les Enfants Terribles in 2016 brings hope that the next generation will enjoy this location as much as we did. One thing is for sure is that the location is ideal and conducive to not only reminiscing about a bygone era and reliving our youth but a fantastic way of creating new memories and experiences for this generation, no matter what its name.

Montreal skyline has changed in the last couple of decades and PVM no longer is the tallest building in this city. Even our famous University street’s name has been changed to Boulevard Robert Bourassa (when did that happen and why?) One thing still remains and is for sure, the view atop PVM is amazing and Les Enfants Terribles’ positioning is great for dinning on one of the few remaining downtown rooftop terrasse in this beautiful city. It’s nice to be at the top of the world sometimes, even if it’s for a couple of hours. 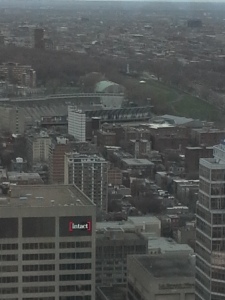