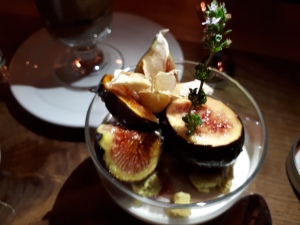 Restaurant Pastaga and Chef Martin Juneau need no introduction. Montreal Foodies by now should be very familiar with him. A prominent figure on Zeste TV, with his show Les Menu Zeste de Martin Juneau, endless television appearances , cookbooks and five restaurants under his belt.

Before Pastaga’s opening in 2012, Juneau owned and ran La Montée du Lait for seven years. It is here that we first learned that he was creating new and innovative cuisine that was different from the mainstream and what other chefs were doing. His creations were masterfully executed and beautifully plated, yet he was using regular simple local products in a new creative ways that were unimaginable. This theme continues at Pastaga, where simple ingredients are used to make masterful creations that are not only visually pleasing but an eye opener to the senses.

Contrary to what the name may sound like, the menu or theme is not Italian or Pasta. Instead the word “Pastaga” derives from the word Pastis, which is an anis flavored alcoholic beverage that is served as an apéritif before a meal, its origins stemming from Europe. Wine and spirits is a recurring theme and almost just as important as the food in many of Martin Juneau restaurants. His other venture a wine and spirits bar Cul Sec, which is just around the corner from Pastaga at 29 Beaubien that also works on the same principals.

Pastaga also falls under the category of wine bar and is considered more of a casual dining establishment than fine dining. But to this Foodie it is more than that. Firstly, the cocktails and wine lists are incredible with many private imports and spirits offered at very reasonable prices.

The quality of food and the way it is served and presented is more refined than just your typical watering hole. The menu and décor maybe simple but the experience like no other. The restaurant serves typical French bistro favorites but is the epitome of originality. All dishes are well thought out and extra care is given to details. All the dishes from its simplest will awe you. Everything is beautifully plated and totally appetizing and inspiring.

The service is solicitous, yet friendly and very accommodating. There is a little up-selling but not over the top. Sharing is recommended to create a convivial meal. I was not too impressed with décor, its wooden table and simplistic chairs and low ceilings and exposed heating ducts will not win designer awards. Yet there is a feeling of familiarity and unpretentiousness.

We were four amongst us and two of us started with white wine by the glass a Posca Bianca from Italy for $ 11.00 a glass, while waiting for the others to arrive. The Posca Bianca is a biodynamic wine, a relatively young wine, but light and crispy with aromas of elderberry, peach and gooseberry. I liked this wine very much, although I tend to go for reds mostly, it was nonetheless refreshing and paired well with oysters and scallop ceviche. 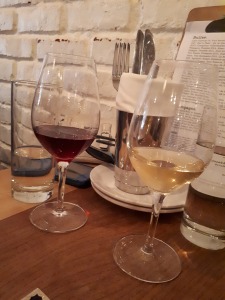 Our other two diners ordered a bottle of 2014 La Presovutera Garsun at $49 .00 a red wine from Piedmont Italy, made with Nebbiola grapes. The wine is strong in tannins with hints of rose and pairs well with meats like the Bison Tartar. 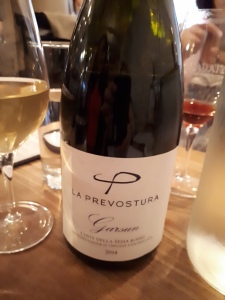 We started our meal with a few entrees that we shared among us, six oysters, scallop ceviche, grilled octopus, and a Matane shrimp Salad. The oysters at $18.00 were a sampling for this foodie and my sidekick Brains, we added a squeeze of lemon and a drop of tobacco for flavor. It was Brains first time trying oysters, she enjoyed it and thought it was not all that bad. I am also becoming accustomed to them and actually starting to really enjoy them more, it’s an acquired taste for me. These were very fresh and not gritty and we were both pleasantly surprised and happy.

The scallop ceviche $20.00 was also a winner with us as well as the Shrimp Matane salad at $ 20.00 and the grilled Octopus $19.00. All dishes sampled were totally delicious. The fish was fresh, tender and beautifully presented. The only dish that disappointed was the shrimp salad, which lacked a little in flavor. I would have preferred a squeeze of citrus to bring this dish to a higher level. 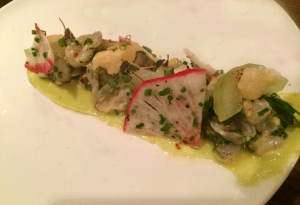 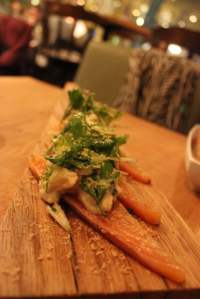 Terry had the Bison Tartar for $ 18.00 and also liked the flavors, not overwhelming gamey with just the right spice and heat. Served with baguette crisps, it was gone quickly after four bites.

For our main meal, we had The Pintade Rotie $ 17.00, a southern style dish of chicken on waffles with corn and accoutrements of popped corn. This was also to my satisfaction and everything was delicious including the micro greens. 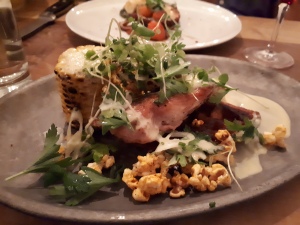 Gianna had the Marinated Salmon $ 16.50 and shared a dish called Espuma de Polenta-$15.00, a mix of chanterelles mushrooms, grilled broccoli on a bed of foam of polenta. 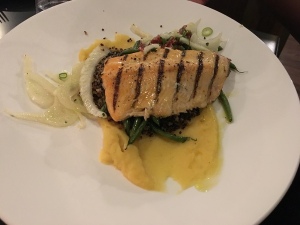 Brains had the Poutine Pastaga $ 20.00 which was not your typical Poutine, it consisted of fingerling potatoes that were semi mashed in cream, with matchsticks fried potatoes and a garnish of Himalayan truffles. A creative way to serve potatoes, this was far the best version of Poutine I have sampled.

For dessert, we sampled the chocolate Mousse and Panna Cotta for $ 8.00 with coffee and black tea. 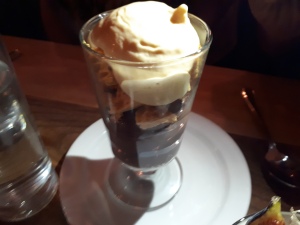 The dark chocolate mousse was simple yet creamy and rich, with Crunch sponge toffee and foam caramel. The Panna cotta came served with two beautiful figs and a ground cherry atop a yogurt pannacotta and basil crumble. This was not only gorgeous to look at but very refreshing. 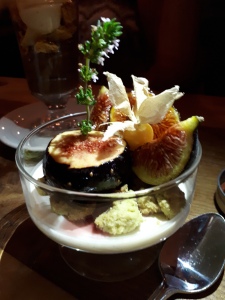 We were super satisfied with our experience at Pastaga. We had lots of fun and really loved everything about it. I highly recommended it and for this foodie it is a definite return.