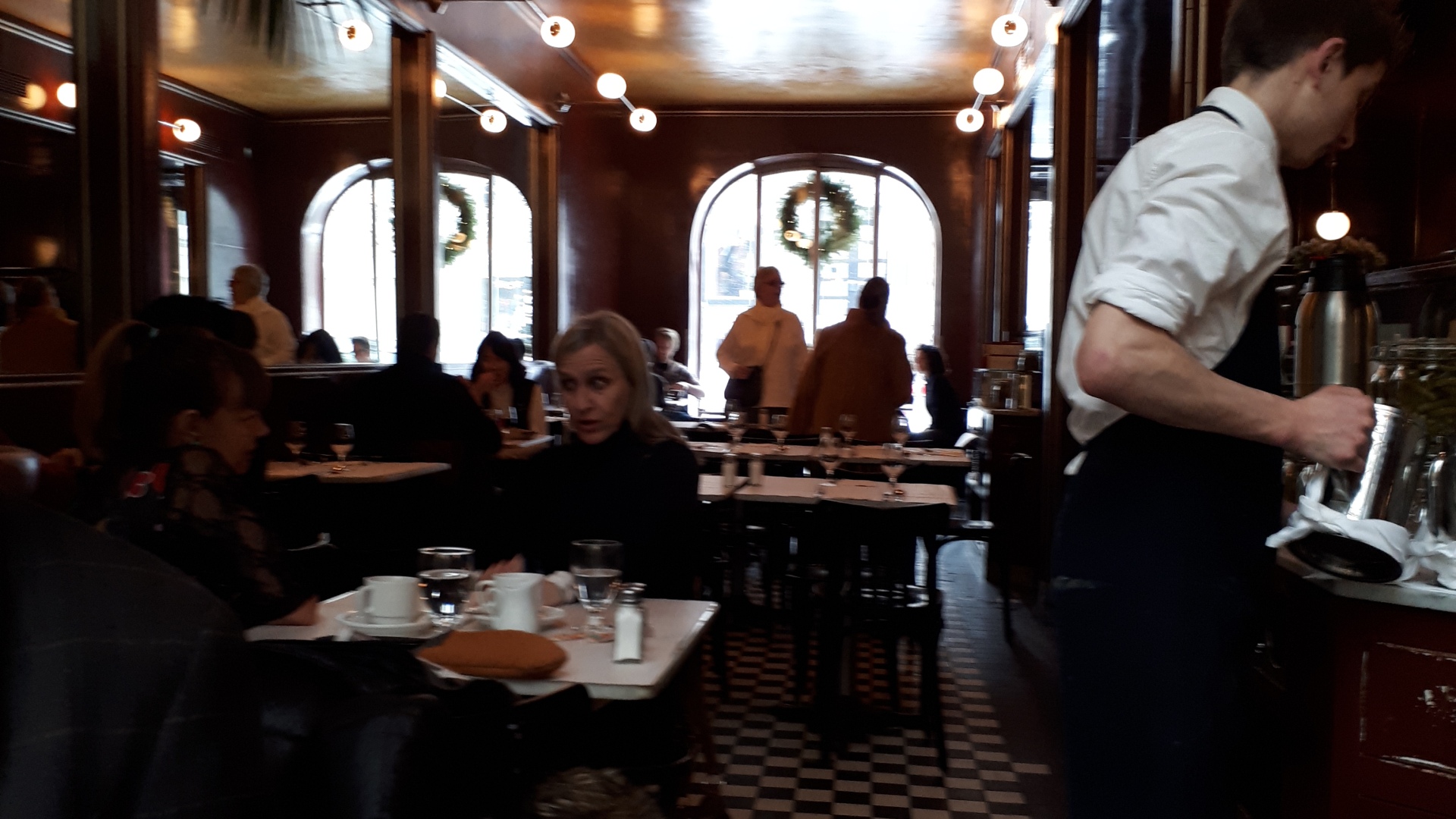 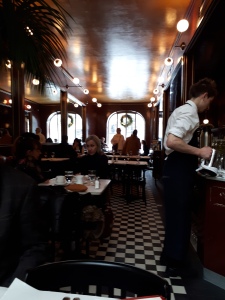 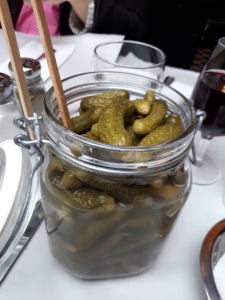 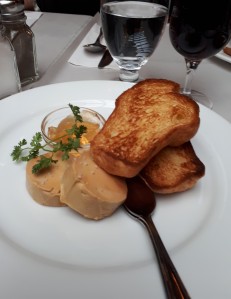 L’Express has been a denizen of the Montreal food dining scene for 38 years now. Opened in December 1980 by Colette Brossoit and her brother Mario, many have passed through its doors in the last four decades. It is considered a Montreal institution and the closest semblance to a relic of the classical style French Parisian Bistro on this side of the Atlantic. Foodies of lore have all dined here at least once in their lifetime, some patrons return often, some visit only once in a while, but it can be said that it’s on every Foodie’s bucket list.

I was introduced to L’ Express by my friend Stella circa 2001, twenty one years after they had first opened and when they were at the height of Montreal’s fine dining scene. They had garnished quite a reputation as being the “must go to place”. In 2001, my foodie skills were not as refined as they are now. At the time, I really did not understand what all the fuss was about and I didn’t know much about French cuisine. I found the menu unfamiliar, the place too noisy, cramped and the staff too rude and snobby for my taste. I felt uncomfortable and was at a loss when it came to ordering, everything was too foreign and unappetizing. I opted on my first visit for the Veal Ravioli as it seemed the most familiar to me. What a strange way to serve pasta I thought and mediocre at best! What I did not know at the time was that the French make their sauce out of Fond de Veau instead of tomato sauce. Now for someone coming from East End Montreal, with an unrefined palate, this was a total eye opener, not to mention strange. Rognons Never, what is that! I will never eat that, not in this lifetime! Today, as my knowledge of the culinary world has expanded exponentially, I understand the importance such a place like L’Express and the art of Fine French Cuisine. It took time.

One evening while having dinner with my daughter and her friend, they asked if I knew of a traditional French Parisian Style restaurant in Montreal that they could dine at. The first thing that came to mind was Restaurant L’Express. So I got one of my famous foodie ideas and thought I would introduce them to the restaurant for our annual holiday excursion. What a good way to learn and pass on my food experiences to the next generation. But I soon discovered the same day when we arrived at the restaurant that they had passed in front many times on their way to the Kusmi tea shop on St Denis. They did not phantom that it was the famous Express that I had suggested. There is no signage from street to indicate so and they just kept walking. So if go, bring the address with you or Google it on your cell to find its exact location, especially if driving by, because it’s easy to miss. Find parking anywhere between Roy and Duluth streets and you won’t be far away to walk. Once in front, if you look down at the pavement you will discover their name emblazoned in mosaic tiles. I was content in knowing that I had a hand in introducing the next generation to dining at L’Express. At the same time I decided to also invite so of my foodie friends to join us, and it turned out to be a memorable occasion for all entailed. A mix of young and old, or shall I say, new and past patrons.

Unlike the last time I was here, we got a warm greeting and a table for seven between the two dining rooms, the best spot in the house to people watch. I could not help but notice the décor had remained stagnant since the last time I was here, seventeen years ago and probably from inception. Some of the wooden chairs needed to be repainted or replaced. The bar still sits in the same location with its red leather chairs and its legendary bar man.

The back dining room which seems like the more modern section of the resto is done in bright yellow hues and a skylight which sheds enough natural light in the room highlighting the many picture frames that line the wall showcasing the restaurant’s history and the staff of present and bygone days. This is the charm of L’Express. Along with its bustling atmosphere, good food and reasonable prices. 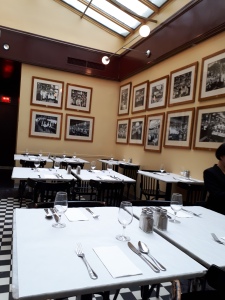 When we arrived for lunch at 1 o’clock, the restaurant was already full, but they waited for all of us to arrive to serve us together. Meanwhile, we perused the menu and finally came to a decision on what to eat. The menu was another thing that had hardly changed, except for their daily specials, so it took a while before making a constructive decision anyways. But I still did not want the Rognons or the Ravioli.

Instead, I started with the Tourchon of Foie Gras for $ 23.00, served with a halved homemade brioche and a dab of orange marmalade. This appetizer always hits the spot for me and is my annual thing for New Year Eve. Since I had not had it yet, I thought it would be a good start. The sweet brioche complemented the Foie Gras perfectly, the flavors just blended beautifully together and enhanced the sweet buttery Foie Gras only further. Even though we had plenty of baguette at the table, the brioche was definitely better.

As for the rest of the table, two of our dining companions had the Soup de Poisson $8.00 which came highly recommended and Potages au l’Oiselle for $ 8.75, a soup made from a sorrel greens or dock which also has rhubarb infused like flavors. Both were satisfactory, the first being the better.

For the main meal we all got different items from the menu. But not before getting a large jar of pickles and more bread, which is traditional here at L’Express.

Our invited guest Mr. D. had the Ravioli Maison for $21.00. Which was exactly the same dish I had many years ago, made with the Fond de Veau sauce. He really enjoyed this dish and the sauce was not overly salty and very delicate. He has at his age a more refined palate than I had years ago when tasting this. His French side would explain it.

Our partner in crime and history buff Brains & Braun had the Shrimp Risotto for $ 24.00, which was the best dish served today. Sheer perfection and to die for. It was creamy and super flavorful, with all the right textures, it has sparse pieces of shrimp here and there. It was not overpowering with a fishy taste or smell and was utter finesse at its best. 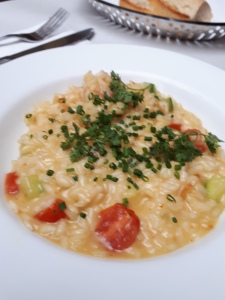 I had the Salad Frisée au Lardons for $ 12.95, topped with a Poached Egg. Perfect for a brunch dish and for those who cannot decide if they want lunch or breakfast, a perfect in between. I found the dish had the perfect blend of bitterness with the salad, and saltiness with the lardons. The poached egg was heavenly and spilled into the dish like a hollandaise sauce. I used lots of the baguette to scoop up the egg yolk. But have to admit by the end of the meal the lardons sat heavy in my stomach, and I needed lots of water to quench my thirst.

The dancing Russians both had the Poached Salmon with Chervil for $ 26.25, the salmon was served atop a puree of greens, in a light lemon Béarnaise sauce. It was perfectly cooked, tender and melt in your mouth. They both liked this dish, and since they have a lot in common, they were too busy chatting about other things to overly rave about the food. 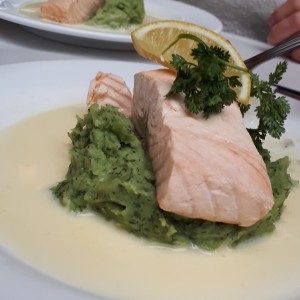 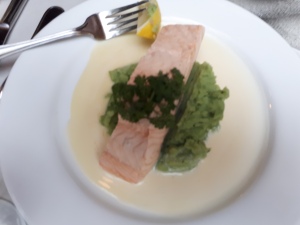 Annie who told me she chose the Roasted Quails with Wild rice for $ 24.75, because it was a dish she normally does not make at home. When asked, she said “they’re Quails”. I surmise from the remark that it meant they were too small meatless and dry .Visually the dish looked exquisite. It came served atop a dark lettuce or cabbage leaves, wild rice, endives, with a scatter of hard boiled eggs, peas and wine sauce. A generous portion nonetheless and a good price point for the value. 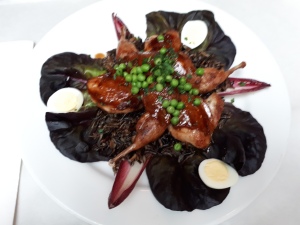 A must at L’Express and one of the things they do best is the desserts. We sampled the Crème Caramel for $ 7.15, their divine Tartin au Pomme a la mode for $ 8.75, and the Apple and Blueberry crumble. 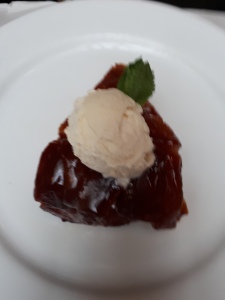 The crème caramel was divine, smooth and creamy with right consistency and egg flan flavors and not overly sweet, the right mix of syrupy caramel on top. 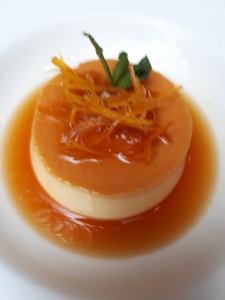 Everyone who had the Tartin of Apples raved and fell in love with it. The caramelized apples had the right punch. The vanilla been ice-cream complimented the apples and took it to a higher level. Even the Apple Blueberry crumble served warm in a cocotte was heavenly and flavorful. Tea and coffee completed our meal for a decent and satisfactory lunch.

I have to admit although not much has changed in the World of L’Express in the last decade. It is still a popular spot to eat and dine at. Always and perpetually busy, it seems that patrons still enjoy its offerings. The service is professional, solicitous and on the ball. The team is hard working and dedicated. The snobbery has dissipated and the feeling is more relaxed.

It can also be said that along with L’Express, I have aged and matured as well. Having done my time in many establishments over the years, and having experienced some of the best this city has to offer. My taste and preferences have evolved. I always enjoy new upcoming trendy places that are creating the latest craze, but when it comes to tradition and the holidays; I like the old haunts that occupy my early adolescent memories. With time comes a deeper understanding and a learning curve that not only help us mature and age like a fine wine but make us evolve to be a better version of ourselves. Life is a journey with good, bad and in between experiences. But if not experienced we cannot move forward and we as well remain stagnant. For future foodies my advice is that L’Express is a good and reasonable place to start.