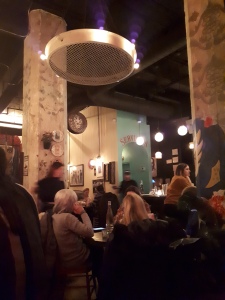 Since its opening in Spring 2015, Escondite has been getting rave reviews from all the Montreal Food critics. Noted as one of Montreal’s “best Mexican restaurants serving flavorful authentic Mexican dishes, in a funky and sexy décor”, it is no wonder young patrons jam-pack it nightly. Anyone and everyone would like to be privy to its intoxicatingly fun atmosphere. I certainly did.

Escondite’s main principal owner Yann Levy not only seems to have the Midas touch but has found a winning formula. He is no stranger to some of Montreal’s trendy drinking and dining establishments. Along with Escondite, he also owns the Habanera, a Cuban restaurant next door to Escondite on Union, Koa Lua Poke Bar, and Biruu -a Japanese Izakaya located on City Councilors. As of late he has opened Gokudo another Japanese style bar on Cathcart, and a second location of Escondite near the Bell Center, on Drummond Street. All have their own special blend of charm, good drinks and great food.

Of course, this foodie wants to experience all the craze and I put Escondite at the top of my bucket list.It has been a little over two years that I have been trying to get to Escondite to eat some good Mexican food. But every time I was in the downtown area, it was either off hours and closed or something came up and I couldn’t go. So, when I managed to nab a reservation for 14 people, a snow storm could not stop me from going and it didn’t. It was by far the worst storm of the year and Montreal was snowed in. I was determined to get there even if it meant taking a two-hour bus and metro ride.

Not everyone felt that way and our reservations number dwindled after news of the impending storm. So as my dining guests dropped off like flies on a hot Mexican day, I had lots of explaining to do and called the restaurant to explain that we now needed a table for 5 only. Our hostess seemed frustrated and mentioned since we had the early dinner reservation, we only had two hours to eat, even if we were late. I complied. It was a harried trip downtown but we finally made it on time after I called one last time and said we may be late, again we were told we had two hours to eat.

The streets were empty except for the snow plows and mountains of snow. I figured no one would be there. We dredged through the mounds of snow piled high on the sidewalks rushing to get there. It was a cold blistery night and we tried to moved quickly as the snow hit our faces and we felt the chill go through our coats. We arrived on time and found our friend Sonia already sitting there nursing a Mojito. As we were showed our table, we were reminded again by the hostess that we had two only hours to eat and needed to vacate the table by 8:30 pm. Talk about feeling rushed. I looked at her and nodded with a glare in my eyes. She was not my favorite person this evening.

Feeling stressed now, we quickly perused the menu and ordered cocktails, a classic Margarita and a Loco Sour for $ 11.00. The Margarita which was served in an old-fashioned glass was strong but left much to be desired in presentation and originality. The Loco Sour served in a high ball with a lemon wedge garnish was refreshingly good. 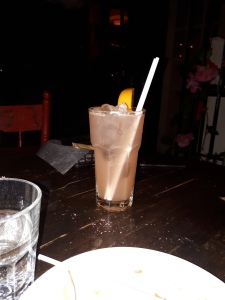 We were ready to place our order, our waiter Yona was efficient and got the orders and tab right. We started by sharing 2 orders of Guacamole split between five people, two salads, the popular Mango Salad and an Ensalada des Jicamas. Brains ordered the Nacho 2.0 for $12.00 as an appetizer and the corn bread for $ 3.00. Barbara and I each ordered the Baja Tacos for $8.00. 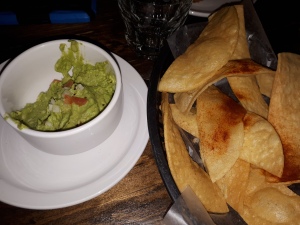 The food came quickly and each dish was an explosion of flavors. The guacamole was indeed the best I have ever had here in Montreal. Fresh, chunky, creamy and spicy. It came served with thick strips of tortilla chips sprinkled with cayenne pepper. The portion of guacamole was small, but with the two salads it was sufficient. The Mango Salad was generous, it came with strips of sliced cucumber, fresh coriander, shallots, chili, and peanuts in a Chamoy dressing which is made from chilies apricot and lime juice. Very refreshing, yet a pleasant mix of spice that was not too hot but sheer perfection.

The Jicama Salad, had a mix of papaya., jicama, watercress, grapefruit and guava and guajillo dressing. It came topped with bacon bits for texture. Jicama although native to South America is relatively unknown here and hard to find in supermarkets and even specialty shops. So, when you do find it , grab it, with a few chayote’s and avocados and make a good salad, you will love it.This salad was a pleasant mix of flavors, Jicama is a tuberous root resembling a turnip. Its texture is almost potato like with not much flavor, when used in conjunction with other items, it absorbs its flavors. The guava dressing is a mix between pear and strawberry flavors, the salad was a plethora of textures and flavors, enhanced by the guajillo chili, adding a punch and spicy kick. Loved both salads immensely.

The corn muffin was also delicious, but we needed a basket of them. 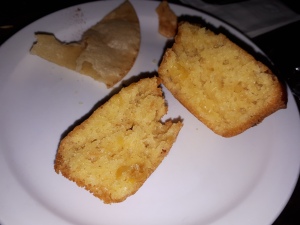 The Nachos 2.0 is not at all what you would think, this dish was not made with tortilla chips a la Tex-Mex, instead we got a Gyozas, dumplings stuffed with Monterrey Jack cheese and Jalapenos. It came with a dollop of guacamole, pomegranate Pico de Gallo and Queso fresco and black pepper sour cream. They were delicious and an obvious influence from Biruu, its sister restaurant. Nice play here for all those nacho haters who are kinda fed up with usual nachos that are served in most major pubs.

The Baja tacos were crispy deep-fried pockets of cod fish. Placed on two small soft tortilla shells, they came with a dollop of guacamole and coleslaw. Just heavenly tender and very flavorful. We could have gone for another round but time was ticking. It was now a little past eight, our waitress came back to see us if we were finished. We quickly called Yona our waiter over and ordered anther round of drinks called Miss Paloma and 2 orders of Churros with Nutella and coffee and tea. They arrived promptly, piping hot and were eaten in less than 2 minutes flat almost burning our tongues.

While admiring the wall art and décor, we scanned the crowd and those who had ventured forth on this terrible snowy evening. Realizing they too were not fazed by the weather, but just enjoying the atmosphere, drinks and good food like as any other day. They were setting up a table for 10 people opposite us and I couldn’t help but think that my gang are a bunch of wusses. We were left perplexed by the popularity of the place and a discussion ensued briefly before the waiter came back with the bills and our cue to exit the premises.Too bad, I loved the place. Would I return? I will leave that decision to when my stress levels wane and enough time has passed for me to really crave good Mexican food again, no matter the consequences. But It will not be a for while. Something this foo-foodie detests completely and is a total turn off, is being rushed through any meal  before I even enter the door. What is wrong with people! The thing I can recommend for sure, if you go ask for a later sitting, maybe things will unfold differently.