Ristorante Da Emma has been a beacon on the Montreal dining landscape for 25 years now. It has quite a celebrity following as well as many loyal Montreal patrons. I have forever heard about Da Emma fine food from anyone and everyone who suggested that it is a must on any foodies wish list. Of course, this foodie who would rather eat anything but Italian food took all her sweet time getting there, but it’s not as if I didn’t try.

In January, as I do every year, I updated my wish list for 2018 and placed Da Emma’s at the top. I also called in for reservations to book a table for six people almost two months ahead. When my foodie friends got wind that we were to dine at Da Emma’s, everyone wanted to come, our numbers soon rose to a dozen guests. So, I had to make a few calls. In between their vacation schedule and being closed and not having enough space for a big group, our reservations got postponed to April. But there was no way we were going to miss out, I was going hell and high water.

I soon discovered that Chef Emma has more than a real cult following, she invites everyone into her kitchen to take pictures and anyone who is anyone has their picture plastered on the wall in the entrance. While looking on her Facebook page for the menu, I found out that Bono from U2 was there two days prior while in town, thus is the popularity of the place.

Da Emma’s humble beginnings started in 1993 in a small restaurant located on St Laurent / St Viateur street. In an area of the Mile End that was home to many Italians at the start of the 60’s and where today we still find places like Café Olympico. Ristorante Da Emma started as a family business managed by husband and wife team, Lorenzo Aureli and Emma Risa. Emma made most of the home cooked meals herself and still does at the age of 80 and her family work the front of the house. It’s success story that makes many Italian Montrealer’s proud and many people of all nationalities have also frequented both establishments over the years to sample some of her simple authentic Roman dishes.

In 1998, the restaurant moved to its new location situated in the basement of a 19th century building that once use to house a women’s prison. Totally renovated it is an expansive 130 seat restaurant that is cavernous yet posh. Similar in structural architecture to many building that line de la Commune Street, it looks like any other in Old Montreal. Situated between Cite du Multimedia and the start of Les Éclusiers (Locks of the Lachine Canal) it is difficult to find unless specifically looking for it. Hidden behind a wall of shrubs its clandestine entrance is not visible from street view. Very private and very incognito once down the cement steps and past the steel doors you are transported to a dark cavernous dining hall with exposed stone brick walls, cement pillars and fine white tablecloth dining. Just the opposite of what you would expect from a prison.

My evening started out charmingly as the valet parked my car and a nice conversation ensued about not having to stress about finding parking on the street. I was greeted at the door by the maître’ d who showed me to my seat. I spotted Mr. Malibu, already sitting there and we perused the wine list together and decided to order a bottle of Santa Christina, a Tuscan wine for $ 40.00; a good deal and the least expensive on the menu. The wine went well with most of our meals and it is one of my proverbial favorites even at home. 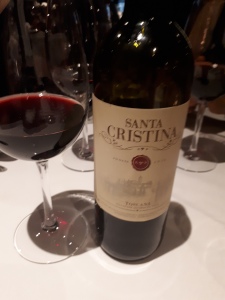 As our other guests began to arrive, and we were all fully seated we were told by the waiter that they would only issue one bill for the group and they did not take debit cards, something they omitted to mention during reservations. I was none too pleased. Especially after he insisted he told me three times. But Mr. Malibu was there to save me as always, otherwise I would have been relegated to washing more than the dishes in Emma’s spotless kitchen. The restaurant also has no paper menus, the menus is listed on a chalkboard that was brought to our table and was read aloud by our waiter Mike, who was already frazzled by our group.

We are given an amuse bouche and generous portion of Bruschetta to start. A piece on country bread rubbed with garlic, a dollop of chopped tomatoes, seasoned with salt, pepper and a drizzle of olive oil, missing were fragrant pieces of basil or chopped onion that I am so accustomed too.

As a complimentary dish, we also received an entrée portion of Da Emma’s homemade Lasagna that was sheer perfection, made with thin delicate homemade noodles, plenty of mozzarella and parmesan cheese and a perfect light marinara sauce that was not too acidic nor too sweet, but hit the right notes. It is one of the best pasta dishes served at Da Emma’s and is what you must order if going the pasta route.

Other entrees sampled was the Burrata with tomatoes for $ 22.00 an additional $6.00 for prosciutto slices. The Burrata was delicious and contained its usual milky center, surrounded by thick large slices of tomatoes and generous portion of basil and a fine olive oil drizzle. It could have used a drizzle of reduced balsamic vinegar drizzle which would have amplified the flavor and given it more acidity and sweetness. 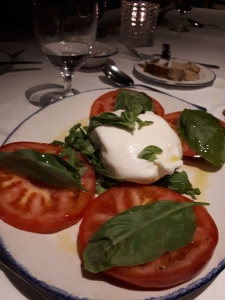 The Vegan at the table ordered the Artichoke hearts for $18.00, she received two tender blanched artichoke hearts garnished with sprinkles of herbs. They were good, but just simply plain.

But no complaints. The Southern Belle at the table ordered Eggplant Parmesan for $20.00 which she enjoyed very much and thought delicious. A tower of three slices of perfect eggplant with layers of mozzarella cheese and a delicate tomato sauce. 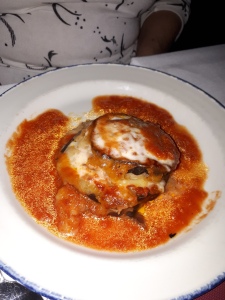 The Foodie had the Carpaccio di Salmone-for $ 20.00, a plate of thinly sliced salmon slivers atop a bed of sliced onions and doused in lemon juice. It came topped with a generous portion of arugula salad. I loved the salmon, but found it was too heavy on the lemon juice and arugula, the acidity was overpowering like my mood this evening.

The rest of the group ordered salads of arugula with parmesan shavings and minestrone soups. Both dishes were ample, tasted good and were just pure simplicity.

As for the main pasta meals, we sampled the Fettucine with Porcini mushrooms and the Agnolotti. Most pasta dishes range from $20-25. The Fettucine dish was served cold and had to be returned to the kitchen.

The Agnolotti dish was decent, I received six large round tender pockets filled with ground veal that were quite tasty, the disappointment was the heavy meat sauce that drowned the Agnolotti. The dish was very filling but heavy, it lacked delicacy of sauce I found with the Lasagna dish. But nonetheless, it hit the spot and accomplished its task which was to fill by belly.

Two of our dinners had the Grilled Lamb for $ 35.00 in which they received a generous portion of lamb shank that was flavorful and tender, it came served with a side dish of two wedges of bake potato sprinkled with rosemary and some rappini spears. The lamb perfectly grilled and served in its jus that was mildly infused with white wine.

Mr. Malibu had the Veal Scaloppini alla Zingara for $ 30.00, tender pieces of veal in peas. He enjoyed his dish which reminded him of his mother’s home cooking.

We opted out for the dessert and just had coffee. I had my usual espresso to wake me up after sharing two bottles of wine and the drive home. I needed more after the snafu that ensued when coming to split the bill. 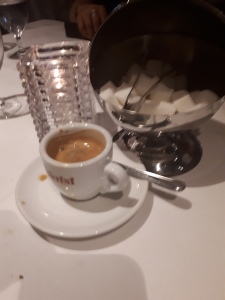 Service was solicitous and friendly at first, but not overly accommodating, by the end of the evening it lacked total professionalism and it bordered on insulting. I still cannot explain what went down, only that a few of us left with a very bad taste in our mouths. Can I recommend Da Emma, sure, with or without me they have survived all these years, they are certainly doing something right and have found a winning formula. But by this foodie’s standards, everything counts from start to finish, this ride was very bumpy.