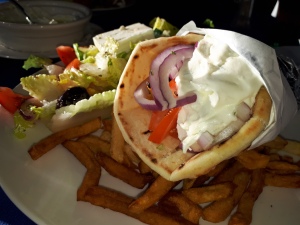 The address may be familiar but the name is new. During Mother’s Day weekend a new sign went up replacing the short lived La Petite Addresse on Sources Boul. with a new resto called Eviva Taverne Grecque. One minute it was there and the next minute it was gone, in a bat of an eye. I was saddened by the sudden change as I loved the food at La Petite Addresse. It was refreshingly new and finally some different type of food in a landscape that is permeated with chain and fast food restaurants.

Although known for their breakfasts the idea did not really catch on as it did on Park Avenue and neither did the Gastronomique pub concept. So, they got up and left in a hurry, as I was told. Whatever be the real reason, the investors were left holding the bag and scrambling to replace it with what they knew best Greek food. Now here is the problem, there are three other Greek restaurants within blocks of each other, so they better be doing something different, cause the competition is fierce.

Although sad to see La Petite Addresse disappear, I did not hesitate to visit Eviva twice since its opening to sample the food, just because that is what the Foo Foodie does. The first time was in the evening for a casual dinner among friends, quick and easy we sampled the chicken pita with fries and salad for $ 11.00. The chicken pita dinner came served with fries and a wonderful mixed Greek salad topped with feta cheese and kalamata olives, the price was more than reasonable and the quality was superb. The chicken brochette was well marinated and tender. We ordered an extra appetizer of Tzatziki to have as a starter and this proved to be freshly made in House, the taste was a not overly garlicky and just right. We received a basket of roasted country bread to go with it. The service was fast and courteous.

The second visit was for lunch with my sister who can’t get enough of good Greek food and wanted to sample an entrée of pikilia and fried calamari, for $ 34.95. The second visit did not go as well as expected, because unbeknownst to us at the time, the chef was not in yet and the kitchen was being manned by help. They were also operating on minimal wait staff. Although the service was polite and accommodating, it was inconsistent and very slow, which is to be expected. To boot, our order was taken incorrectly and we received fried calamari instead of grilled octopus, which at this point we accepted because we were starving and had little time. It took a little while longer to get our pikilia and another half hour or more to get a takeout order of souvlaki. 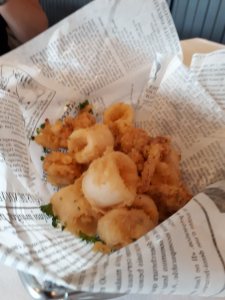 The Hot pikilia platter was delicious and filled with Greeks Mezzes, the zucchini and eggplant fritters were comparable to some of the top Greek restaurants in the area and the rest of the dish had plenty of usual Greek delicacies and fresh vegetables. The exception in this dish was a dollop of the taramasalata which tasted rancid. Once we mentioned it they quickly fixed the issue by making us a fresh one and even comped us.

The space and décor remain the same, with a few splashes of blue table cloths scattered here and there.The place has lots of potential for so much more and hopefully it will do well. They are presently looking for wait staff and cooks. Wishing them the best of luck in such a cutthroat industry.