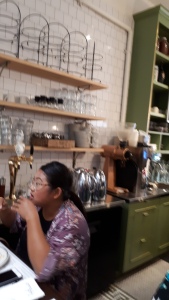 Arthur’s Nosh Bar is not the typical or traditional Jewish diner that one would find around the main. The concept is like a page out of a Gabrielle Roy novel, set in a neighborhood that has seen its share of gentrification and where everything old is new again. The formula with Arthur’s Nosh Bar is not just its traditional food but the way it is mixed in with modern current elements. It has become trendy with the local hipsters and millennials like so many restaurants in the area.  Furthermore, its popularity is not limited to locals but transcends all nationalities from all over our city and as I discovered tourists who have flocked here to sample some of their fare. In two years, it has managed to amass quite a cult following and not only among Jewish clientele but with all gentiles.

Different from the Jewish luncheonettes of yore, Arthur’s Nosh bar has been totally remodeled in a modern theme in a stylish bright space. The restaurant drawing point is its sage green paneled bar and marbled counters.  The space is clean with large subway tiles and white walls, and tan leather banquettes. At the end near the open kitchen, a long convivial dining table reminds us of what family dinners are all about. 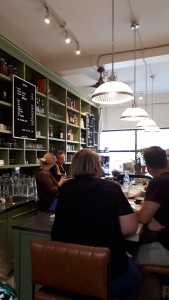 Arthur’s Nosh Bar is one heck of a busy place. Patrons flock here because it is comfort food at its best. The ambiance is fun and the meals are deliciously good. Started by a husband and wife team Alex Cohen & Raegan Steinberg whose previous experience working at Joe Beef make for a winning formula and a definite Midas touch. Everything here runs smoothly. The menu combines both of their backgrounds and traditions deriving from Sephardic and Eastern European dishes. The food is a smorgasbord of classical dishes done their way with a modern twist. Do not expect large portions or smoked meat, its not that type of place.  Don’t let the long line ups that have permeated the front door since its inception in June 2016 discourage you; once inside you won’t be disappointed. Be forewarned. they don’t take reservations, but the wait goes fast.

Arthur’s is also not a deli, but more of a modern unpretentious diner / luncheonette serving healthy organic breakfasts and delicious lunches. The restaurant has three menus, a regular breakfast and lunch menu, a weekend brunch menu and a Jewish Holiday menu.

We visited Arthur’s on a Friday morning, to have breakfast between friends. We waited in line for 20 minutes and were seated at a communal table next to the kitchen with three girls who were already half way through their meals.  I love striking up a conversation with strangers and they had lots of recommendations for us, including the pancakes called Syrniki, for $ 14.00, made with cottage cheese, a Hungarian dish served with Quebecois Maple syrup.

I decided to go with the Latke Smorgasbord for $15.50, it contained all the elements I was looking for. The dish consisted of scrambled eggs, smoked salmon gravlax, a small latke patty topped with sour cream, caviar and a cucumber Israeli salad and slice of challah bread. The salad was so refreshing and a real palate cleanser. What I craved the most was the latke, but the portion was small and it left me wanting more. A bigger portion would have sufficed, so I was disappointed in this respect. Otherwise everything was to my liking and perfectly executed.

My BFF had The Scramble for $ 15.00 which consisted of scrambled eggs, kale, onions, cheese, avocado and salsa and Black Russian toast. She loved mine more so we split our scrambled eggs to sample the best of both worlds. I enjoyed hers as well and the split was a good idea.

As platters and platters of food poured out of kitchen, we were tempted to try more of their fantastic food. One of girls seated out our table suggested we try the pancakes. We both agreed we were feeling too full to attempt it.  She insisted we try a small portion of hers to taste and insisted we order the Caesar cocktail for $ 10.00, as it came recommended in some food review she had read.  A little too early in the day for us to start drinking, so we opted out. 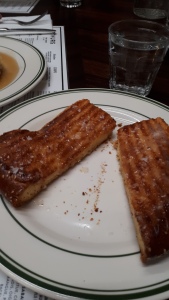 As other people joined us at the table and further conversation ensued about top Montreal dining spots. We met a group of friends who had driven all the way from Toronto just to sample some of the food at Arthur’s and a few others restos on that strip.  They also recommended the Schnitzel.  It was almost lunch, we debated if we should be pigalicious and stick around for another round.  Nah! We had to watch our figures. So, we would have to leave it for another time and that meant a definite return.

We had such a good time at Arthur’s and the service was amicable and super friendly but rushed. They have a knack for making you feel special, even though they are extremely busy, they take the time to go the extra mile.   On our way out, we paid and got a cookie with sprinkles for our good behavior.  It was one of the best cookies I have ever tasted; a mix between vanilla and shortbread, it was buttery, extremely tender and absolutely decadent.

Arthur’s Nosh Bar proved to be a real Smorgasbord in all senses, visually appealing, tasty and titillating for the olfactory senses and the mind. It was nice to meet like- minded people, where food is optimal and conversation is easy. All was absolutely undeniably delicious!