Trendy Hambar, along with many other restaurants is located in an area of Old Montreal that can be labelled the Golden Square of popular upscale restaurants.
What sets Hambar’s aside from the others and its claim to fame (aside from Anthony Bourdain being spotted while filming the Layover in 2014) is its emphasis on charcuterie plates and a menu that incorporates pork meat in its different forms. One can easily spot its encased glass window sporting cured legs of ham from street level.

It stands as a fascinating contradiction to the beautiful architecture that permeates not only the façade but the chic boutique hotel’s interiors. Located in the restored and revamped Heritage Beaux-Arts building in Hotel St. Paul, once you pass the heavy antique doors the refurbished interiors of both restaurant and hotel are devoid of any history and springs forth a new era of fine dining and hotellerie.

At its inception and its opening in 2001, the space originally housed a restaurant called Cube. Chef Claude Pelletier was then manning its kitchen and creating bold modern cuisine. The restaurant decor was modest, industrial for the time with concrete grey walls, mirrors and white drapes that screamed contemporary simplicity. It catered to the branché crowd of business executives that worked in the area at the time. The food was exceptional. It was during this period that I had got to sample Claude Pelletier’s innovative cuisine and had the most delicious Vol Au Vent of wild mushrooms in a port wine sauce. To this day I can remember this dish, a prelude to Claude Pelletier cuisine and what was to come.

In 2004, Pelletier left Cube to open Le Club Chasse et Peche. He was replaced by Chef Eric Gonzalez for two years until 2006. It then quickly closed for renovations and was replaced by Le Vauvert in the summer of 2007. Vauvert was the brain child of Quebec rock star Garou and Giovanni Bernardi, the head of an elite modeling agency in Montreal at the time. Le Vauvert looked gloomy and foreboding, the walls were painted black, minimal halogen lighting and leather banquettes created an aura of inconspicuousness. It had a fairylike quality to its atmosphere and it played with the concept of a devilish notion obviously inspired by Chateaux Vauvert in France. Le Vauvert attracted a small demonic clientele, who dined there more for the aura than for the food.

It wasn’t until April 2012 that Hambar opened its doors, stirring up a buzz as soon as it came onto the scene. It drew in crowds one for its simple ideology and secondly because of its owner Philippe Poitras popularity. Poitras who was ex-sommelier at Au Pied du Cochon had quite a cult following because of his mastery in pairing wine with pork and meats. The concept was simple – a wine bar specializing in charcuterie plates with imported hams, local cheese and dishes highlighting mostly pork in its various forms.Revamped once again, the restaurant was reinstated with modern sleek themes, the old depressing décor was replaced by white walls, wooden flooring, light wooden tables and bar with black leather chairs and banquettes lining the walls.

At the right of the room, a bar stands ready for anyone looking for a quick snack or just hanging around for a drink. Perfect for the hotel clientele and for those who just want to linger with a glass of wine or cocktails. The restaurant now has an airy bright feeling with its tall windows overlooking Place d’Youville. The entrance via Hotel St Paul features an encased glass fireplace and comfortable velvet couches for lounging around. The aura is cool, chic yet very streamlined.

The chef manning the kitchen these days is Annis Meski (Pois Penché), a native from Morrocco who got his start working in his uncle’s hotel but who also worked in France. His focus at Hambar is working with local farms to emphasize Quebec produce and being sort of a spokesman for local food producers.

Although the restaurant name is misleading. Hambar ‘s menu is not all about ham, but more about fresh local market cuisine, with a fusion of Italian. Yet, they are best known for their charcuterie and wine bar. They offer brunch, lunch and dinner as well as appetizers and tapas like dishes at the bar. They also have a private room for parties and a resident deejay.

On the evening we visited, they have a special menu for the Montreal à Table event. The service consisted of three servings at the cost of $43.00, with some dishes at an additional cost. I started with a glass of 2015 Californian Cabernet from Grayson Cellars for $13.00. It had nice strong bold flavors, with good tannins. My girlfriend Lulu had her favorite, a white Sancerre 2016 from Domaine Paul Prieur for $ 15.00.

We decided on sharing the meal and ordering different items on the menu so we could get a broader spectrum of the type’s dishes being offered.I started with the Veal Carpaccio dish, with sautéed oyster mushroom in an egg purée and brown butter topped with Reggiano cheese for an extra $ 5.00. This was not my usual raw carpaccio; at first it was delicious, in small bites, but I found the veal tough, and the dish was overladen with mushrooms which were bland and flavorless. 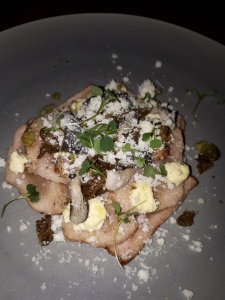 My friend Lulu ordered the multicolored potatoes, with herbed sour cream and mustard microgreens which came topped with pieces of cooked prosciutto. Beautifully presented in a half moon shape, the textures of the crispy prosciutto and the creaminess of the herbed sour cream had the perfect balance of flavors. I have to admit it was a much better choice for spud lovers.

For the main meal, we had the Cod with Black Garlic Cream, Jerusalem artichoke and oyster mushrooms which was perfectly executed and divine tasting. The cod was tender and not overcooked or dry. The mushrooms and sunchokes in cream sauce were delicious and a perfect marriage of flavors. Even the black garlic from Ile d’Orleans, that I sampled for the first time knowingly in any dish, was not overpowering.

The next dish, Cavatelli, which cost an extra $9.00 because of the foie gras shavings was a disappointment. Beautifully presented with loads of microgreens, it looked appetizing. The long fingerlike cavatelli came with pieces of duck confit and maitake mushrooms. By now they had dimed the lights and I was not able to see what I was eating. I couldn’t immediately differentiate between the meat, mushrooms and pasta.The dish was a medley of overladen soft pale flavorless chewy mush. Aside from the foie gras shavings, the meal lacked oomph.

For dessert, we sampled the dark chocolate bar dessert and homemade churros. The dark chocolate bar was a square-shaped pie with chocolate graham wafer base, creamy mousse filling topped with spicy red chili pepper ice cream and a sliver of bacon. I mean, kudos for an original idea, but it lacked flavor again. The quenelle of ice cream was bland, the chocolate mousse generic and the only thing that had some saltiness was the bacon sliver.

The churros made up for the lack of the first dessert choice and probably were the highlight of the dessert menu, at least for me. We received four hot churros served with salted caramel sauce, which were delicious and crispy. Dipped in the caramel sauce they were heavenly. 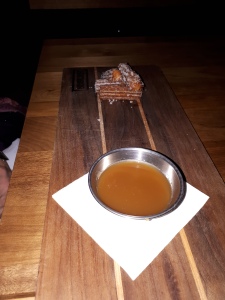 What made up for the lack in terms of food was the service. From start to finish the service was impeccable and accommodating. Our waiter was very talkative, took a genuine interest in us and made us feel very welcome.

Another drawback at Hambar is the noise level. The sound seems to bounces off the walls and with music also playing in the background the chatter gets louder. Conversation is impossible unless you are yelling and the situation becomes annoying and not conducive to a night out with friends who want to catch up on things. Lulu had to sit next to me so we could converse and not raise our decimal levels and stress.

Hambar does have some strong points, it’s a première spot in a great place in a beautiful setting. In the daytime it is probably a better bet for lunch, in the evening it reminds me more of a wine bar to party at than an upscale fine dining experience. The food misses the mark for the price I paid for one person. Everything should have been ideal, but it just wasn’t. The sense of being in a cool trendy place supersedes a fine culinary experience here. It all depends on what you are looking for, but if there is a next time, I will stick with the charcuterie plate and wine.