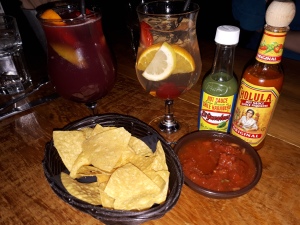 Carlos & Pepe’s may not be a top food destination for some foodies, but worth an honorable mention as one of Montreal’s oldest Mexican restaurant. The first restaurant opened circa 1982 in the basement of the locale that use to house Pam Pam Café & Restaurant on Stanley Street. For a generation, this Pam Pam café was popular for the Studio 55 crowd who would come in for Hungarian food and pastries before or after a night of dancing. For students, who frequented Concordia’s Drummond Building in the 80’s, they may remember Carlos & Pepe’s humble beginnings in this spot. It gained popularity for serving tacos, sangria and margaritas to many famished students for a couple of dollars a pop. It became our go to place in between classes or after class to wind down with some drinks for a quick affordable bite. With each era comes change, like many prior closures, a couple of years later Carlos & Pepe moved to its present location on Peel Street. Today, it is still serving Tex-Mex style food and their famous double sangria’s during Happy Hour. 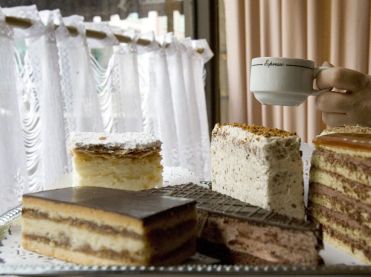 The last time I visited the Peel street location a couple of years ago, it was super busy place that had a revolving door of sorts. I found the service was poor, the food was mediocre and portion sizes had shrunk. They still had their happy hour special of two drinks for the price of one, which seemed to be their main draw. But the good old days were tacos cost a dollar were gone. What remains are the good memories of its off shoots like the short- lived Marcos & Pepe on Sherbrooke in Westmount. We always preferred Marcos & Pepe because of its spaciousness, festive atmosphere and its proximity to home. It became our hang out for good Mexican food and our go to place where we created many wonderful lasting and funny memories with friends.

Many years have passed since then, many good authentic Mexican restaurants have opened in Montreal with the influx of many Latin immigrants. Carlos became a thing of the past, and Marcos shuttered. We waited for a good Mexican restaurant to open closer to home and a few years back our prayers were answered when a restaurant called Guaca e Mole, opened in Marche de L’Ouest in Dollard des Ormeaux. Finally, the West Island had a good Mexican Restaurant. So, I was surprised to spot Carlos & Pepe resurfacing in Vaudreuil. While we were busy trying out other Mexican restaurants, Carlos & Pepe’s started franchising and continued serving Tex-Mex cuisine to other communities such as Laval and Blainville.

This foodie loves to share her experiences especially with the younger generation. So, on a cold blistery evening during a shopping trip to Vaudreuil, we stopped by to grab a bite to eat and experience some good old Mexican warmth. Located in a strip mall via the service road, it may be far removed from sandy white beaches, but all the snow sure made up for it. With ample parking, it was convenient and easy. We walked in to find a large space decorated with usual Mexican themes, large yellow pots with cacti, vibrant colored walls and a large bar area with a large mural painted with Dias de los Muertos figures and palapa style eaves. The bar area is a cross between Tiki bar and Mexican Beach house, with lighting strung across the ceiling and different color tiling behind the bar making it look like a mish mash of ideas. 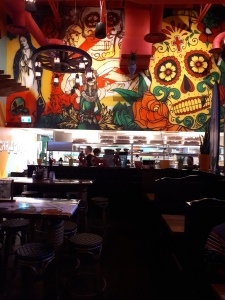 Seating arrangements are a series of banquettes and wooden tables in the main dining room and tall communal tables in the bar area. I loved the antler chandeliers which I thought gave the room a modern theme, but somehow got lost in the décor. I couldn’t help but feel that the whole concept was too cluttered and needed some streamlining, it borders cheesy and I am not talking about the enchiladas.

The redeeming quality of the experience this evening was the warm service and hospitality we received from our waiter Francesco. He was fabulous, super friendly and very accommodating, taking time to chat with us and offer suggestions. We had his full attention probably because the restaurant was empty on this snowy evening. I wonder if things would have been different if it was a busy night. Nonetheless, it worked for us and we had a better dining experience.

As I perused the menu, I discovered that my favorite dish of Chimichangas had been removed from the menu. I asked our waiter about it and he said that some dishes were not as popular any longer and had been removed. This was a huge disappointment, it was my proverbial favourite. For drinks we started with our usual, Sangria. We chose a red and a white for $ 6.95 each. Inexpensive, but now served in hurricane glasses, which were a smaller quantity but still powerful and not watered down. We also received the usual complimentary bowl of tortilla chips and salsa. Which we wolfed down with the sangria in no time. 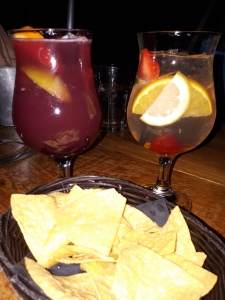 For our main meal we both decided  to go with a dish called the Mexican Flag for $ 16.00. The dish comprised of three enchiladas, one of each, made with pulled beef, chicken and spinach and cream cheese. It came topped with tomatillo and guajillo sauces and a side order of Mexican rice. The chicken and beef were quite generic and lacked flavor. The spinach enchilada fared better than the others. The dish lacked any authentic Mexican flavors and was quite bland. Missing was the fresh scent of cilantro, cumin and chili aromas. The rice too seemed watered down and lacked that flavor of fresh acidic tomatoes and spices. We used the Cholula sauce and the green chili sauce on the table to give it some heat and flavor. Also gone were the sides of complimentary refried beans and mini salad made with their famous dill sour cream dressing. Refried beans were listed on the menu as a side dish for an extra $4.50, the salads will cost you between $11.00 -$17.00 each. 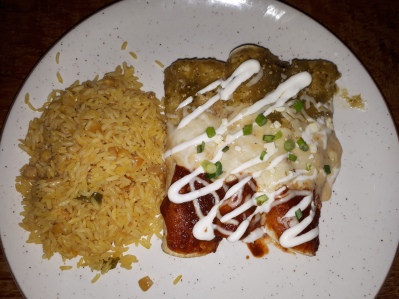 To top off our meal, for dessert we had an order of churros to share for $ 11.00, along with two teas to warm us up for the ride home. The churros were decent and hit the spot. 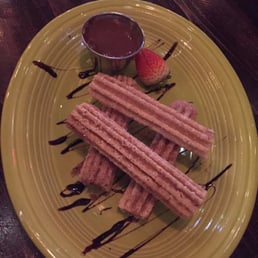 On the way back, I couldn’t help but think, which I do too much of these days. A good thing I got from this dining experience is, I got to share part of my past with my daughter. I got to revisit one of my ole haunts even though the experience was much more different from the heydays of the original Carlos & Pepe’s. We had fun and it was still pleasant and enjoyable.

My only drawback was that with considerably less money in my pockets these days, I was reminded why I have become so discriminating about my choices in restaurants. Mediocre food and expensive menus are one of the disadvantages of franchising. Yet, we come back to the issue that restaurants are a business and need to be profitable to keep going. I understand this, but these days I look for better quality and pricing for my buck. Spending money frivolously doesn’t cut it for me any longer when I can make a better product or have it elsewhere. I would rather put my hard-earned cash to better use. But then this is just my opinion, you can do what you want.