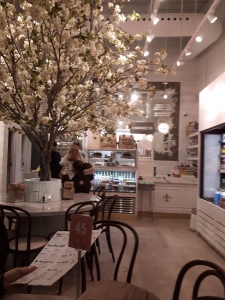 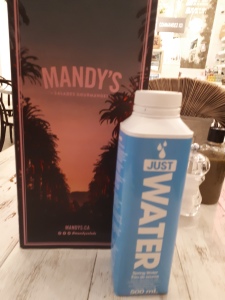 With its sixth location now open in the West Island, Mandy ‘s is a considered a Gourmet Salad emporium that has taken Montreal by storm since its humble beginnings in 2004. It began with the two founders, sisters Mandy and Rebecca Wolfe who had no previous restauranteur experience. Their first location was in a pop-up behind a clothing store in Westmount. By 2013, it gained so much popularity they opened their flagship restaurant on Sherbrooke street in Westmount and they were on their way to reign as the Queens of Gourmet salads in Montreal.

Salads are no stranger to most of the population. They have been a staple in most of our diets, wither we like them or not. The term Salad, is comes from the Latin word “Salata” meaning salty, they go as far back as Greco-Roman times, where people would eat mixed greens with a type of briny dressing used to preserve vegetables. Over the centuries, there is many references to salads from Shakespearean times to early 1920’s American culture with the introduction of the famous layered salads. Everyone remembers the dispute about who created the Cesar salad and famous Thousand Island dressing.

Present day, we find bagged salads kits sold in supermarkets, in restaurants and fast food outlets. The industry has gotten so big that it has averages seven million in sales annually. These days it is not only the vegan and health food fanatics that amplify this multi-million-dollar industry, but everyone from all walks of life, gender and denomination.

How did the Take-out salad craze become so big and what has elevated it to the level it is today? Some single handedly credit it with a West Coast phenomenon that started in California with main stream media. I am not saying this is how it happened, but watching the Kardashians woof down big plastic containers of salad on their reality show, like they were eating blinis and caviar surely pushed this craze to different levels. It gave me cravings and soon everyone wanted to jump on the bandwagon and pretend they were were eating healthy. Especially women who make up the biggest proportion of salad eaters at 30% more than any other and as a means to keep their weight down.

Enter Mandy’s, a Montreal phenomenon that satisfies the city’ supply and demand. It is no wonder that in five years they have opened six locations, with more in the works. My girlfriend and I often find ourselves craving a good salad. She a proverbial health food fanatic who is always looking to eat healthy and lose weight. I a proverbial food junkie who needs to eat anything other than poutine once a month. We are always looking for the next best thing. So, we deviated from our usual salad spot and headed out to Mandy’s in Dollard des Ormeaux, after hearing so much about it. Nestled between, Dunn’s and Panama in the Marche de L’Ouest, this small but quaint locale is carefully decorated in hues of white, a tropical foliage mural and a huge blossom tree in the center of the room. The décor is a well thought out process, for those technological patrons, who will use the spot as a place to work during their lunch.
The table base that surrounds the blossom tree contains A/C outlets to accommodate recharging of laptops or phone chargers. The space is bright and airy with a sense of well-being. Basic black & white clean stream-lined themes with personal touches and a sense of family that line the pictured walls. The idea is congruent with a sense of health and current modern times.

Being our first time there, we were looking for some sort of guidance, but none was offered, not an iota. The cashier just stared at us dumbfounded and was really not engaged. We muddled through and after a few seconds of quickly perusing the menu above, I had made my decision, and decided to go with an Autumn Salad, for $ 11.99 with Seasoned Roast Chicken for an additional cost of $ 4.50, and a bottle of their Just Water for $ 2.50.

My girlfriend went with the Wild Sage Salad for $ 13,99 with added protein, Tamari Mock Chicken for an additional $ 3.99. I received a number for our table and was told twice to get only the blue water bottle from the fridge. I grabbed a seat in a little nook after waving away a plethora of chairs on a table set for 4 people. Getting back up a few minutes later to get some utensils off a shelf, I found it excruciating to not hit my chins on the chairs again. I was not alone in my displeasure, as the girls seated next to us felt the same way as they watched me struggle with the chairs. My girlfriend finally arrived and seated herself with a look of dismay and had a few choice words about the cashier. She can be complicated about ordering food, but it took almost 15 minutes till he got it right. She was not impressed.

Our salads finally arrived 20 minutes later, and then, I was not a happy camper. I found the salads relatively small for $ 25.00, I expected much more for the price. The salads did come served in decorative bowls at least, but not plates. I was wondering what the smaller bowl salads looked like at the lesser price. My classic balsamic vinaigrette dressing came served on the side.

Upon first glance, I couldn’t see any greens, I added the dressing and mixed it, hoping I would find more on the bottom. Instead I found chunks of clumped romaine lettuce that was wilted and brown. I received the ends of the head of romaine lettuce that were not fresh. To add insult to injury, I had no other greens in my salad. Minimal corn and black beans, the chicken was not roasted chicken but more slivers of mock chicken. I had more like three halved cherry tomatoes, no real flavors of fresh cilantro, minimal goat cheese and the pecans were not roasted but raw. The salad was completely dull and a total rip off.

My girlfriend’s salad fared much better in terms of green lettuce, but she was not impressed either, as it lacked ample sweet potato, pear and dried figs and other ingredients. Her salad was more of a mound of greens topped with crumbled goat cheese and it lacked flavor, the sage dressing fell flat as well.

When the waiter picked up our plates, she made no qualms about showing him pieces of my brown salad left in my bowl that were inedible. He made no comment, just walked away.

I am not sure about other Mandy locations, maybe they are a little bit more discerning in Westmount with their clientele, but in the West Island, it is a glorified take out stand with bad quality food and a young staff who don’t really give a damn. You would be better off with bagged supermarket salads at
$ 5.99, they are a lot fresher. This a definite no return for me.