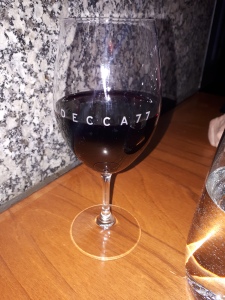 During a Foodie’s lifetime, one can see the evolution of a dining space morph into different things. In a span of 20-30 years one can witness the changing of hands from a group of restauranteurs or the passing down to family members. They can spot their imminent decline or simply see it disappear form the landscape with a permanent closure.

Over the years, we have become attached to the restaurants we frequent because of the good memories we have shared there. The special birthdays, first romantic dates, or simple dinner among friends to just fill up our empty bellies. We wish they would remain the same and never change or never go out of business, even though we only frequent them only once every few years. They become our special place and we feel they are exclusive just to us, we become attached for whatever reason. Good service, a warm reception and good food only cement this notion even further and keeps us coming back.

I had the pleasure back in 2000 to get attached to the space that presently housed Decca 77.
Back then it was called Tsirco Restaurant and Jazz Bar. It was basically an upscale Pasta bar set in fine Art Deco themes, the décor was all the rage back then with modern theme of white, leather chairs and chrome and glass everywhere. The pasta dishes were innovative, we munched on beautifully presented appetizers, lobster ravioli and fine Italian wines. The space was chic and it fit right in with our twenty’s lifestyle. We returned many times just to sit at the bar out front to have martini’s and the new appetizers of the month that our favorite waitress would upsell. We were in the realm.

Opened and operated by Peter Morenztos and his Sunshine Boys Holding company, the restaurant was short lived but not forgotten, with his fine eye for detail and knack for high end restaurants, his Midas touch made Tsirco a happening place for five years. In his relentless quest for the best and better he sold it in 2005 to the Tom Nacos Group to start the Queue de Cheval across the street. Tsirco was then renamed Decca 77 and the format changed.
Fourteen years later, after many ups and downs and bad reviews, it has settled into a comfortable niche with a new chef and is considered more of a French Gastro pub, that caters to upscale hockey fans who do not mind spending money for a quick bite at steep prices before the game. During the day it caters mostly to the business crowd who dine here because it is adjacent to the large office towers next to work.

On regular week nights it sits virtually empty, except for the months of January and February when Foodies can sample their cuisine during the Chop Festival at $ 22.00 for a three-course meal. This year after a very long hiatus, we decided to return, after a suggestion from a friend. We did not have much to lose at the price point and we were pleasantly surprised.
Be forewarned, it never costs just $ 22.00, some items on menu come with an extra cost with wine added its can be around $ 50- $60. per person.

Parking is almost null in the area, so park indoors, it will save you a hassle and an expensive parking ticket. The underground parking at Provigo on corner of Drummond and Ave des Canadiens, is your best option and is only $ 12.00 for three hours.

We entered the restaurant only to be greeted by a pleasant and amicable waiter. After quickly spotting Lulu sitting ahead of us, we waved and he accompanied us to our table. I was surprised at the emptiness of the restaurant and questioned our waiter, who responded, it was a quiet evening because there was no hockey game on. Being the last night of the 7th edition of the Chop Festival, they did not expect too many clients so we had his full attention all night long and the whole place to ourselves.

The first floor had been totally renovated since my last visit. The white monochromatic themes had disappeared and replaced with dark floors, dark red burgundy chairs and tan colored velvet banquettes. The large floor to ceilings windows is the only sign of what still remains, along with its glass encased wine cellar. They still offer white linen table service which amplifies the experience to a finer dining. The mood more casual and relaxed.

We were offered the menu and wine list, and after quickly perusing the menu, we decided to take different items on the menu to get better sampling of their cuisine. For starters we ordered, a Bordeaux from M de Magnol, France for $12.00 a glass and a Pétale de Rose, a rosé from Provence France for $ 13.00, both were delicious, the Bordeaux robust and a perfect accompaniment with my platter of charcuterie.

Lulu ordered the Butternut Squash Soup and Browned Butter and Anais ordered the Roasted Beet Salad, Goat cheese, Pistachio, Arugula, apples. Lulu loved the Squash soup, it was velvety and creamy with perfect flavors and seasoned with Tarragon. The Salad was just as savory, the beets were al dente, the goat cheese and sweet apples tangy and the texture perfect with sprinkles of pistachios.

My Charcuterie platter at $ 3.00 more was not a disappointment either, with ample grilled bread, a mix of cold cuts and plate, pickled vegetables, it was a lot. What a liked in particular were the five mini dried sausages that were more than what I bargained for. The prosciutto was also very fresh and of good quality. My glass of Bordeaux paired well and that was enough for me.

For mains, our first dish was the Ricotta Gnocchi made with roasted tomatoes, wild mushrooms, kale and parmesan cheese. The dumpling were large full pockets of tender and perfectly cooked dough, packed with flavors of deep-fried kale and sparse roasted tomatoes. Anais was satisfied with her choice. 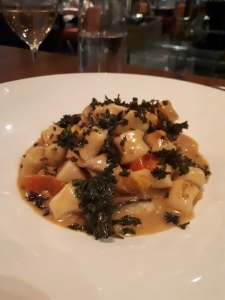 Lulu had the leg of Duck confit, which she loved. It came with cubed morsels of butternut squash, slivers of zucchini, pieces of halved Brussels sprouts which she passed on to the rest of us and topped with scatters of pecans, and a delicate mustard sauce.

I, of course had my Grilled Bavette with pepper sauce, with a side order of House fries at an additional cost of $ 7.00. Feeling particularly carnivora this evening, I needed my mega dose of red meat and protein. I loved the Bavette, it was perfectly cooked medium rare, very tender and tasty. I would have preferred the pepper sauce on the side for dipping instead, as the cut of meat was exceptional and good on its own. 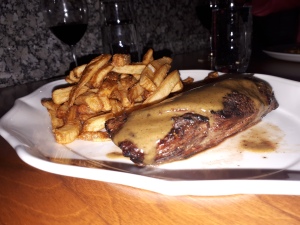 For Dessert, Lulu and Anais decided to be decadent and decided on the Tarte Tatin, an apple caramelized round mini tarte for an extra $ 7.00. I opted out for dessert and just had an espresso coffee.

The Tarte Tatin is Lulu proverbial favorite and she could not resist. Anais followed suit and got to try it for her first time. The Tarte Tatin was good in all respects, just different and nonetheless a good final act of sweetness for a decent meal.

Service was courteous and impeccable throughout the evening; the mood was perfect and we got a chance to talk and have great conversation. I was happy I got to revisit the space which opened the flood gates to many wonderful memories and I finally got to sample some of Decca 77 fine food after all this time.
This completes this edition of the Chop Festival and it is a definite return for next year.