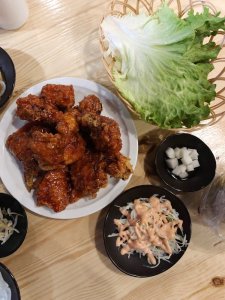 Last fall while everyone was getting ready for the deep winter freeze, a new heartwarming Korean BBQ restaurant was getting ready to open in Centennial Plaza Mall in Dollard des Ormeaux. Replacing the old short-lived Pizzeria Piccante in the same locale, Restaurant Matjip, offered respite with their signature dish of Crispy Korean Fried Chicken and other Korean favorites like bibimpap. Matjip, meaning tasty house has lots to offer in terms of food, ambiance and service. A family run establishment, it makes up in hospitality, where menu lacks. A small cozy space, that is popular more with the lunch crowd and their inexpensive meals.

Matjip doesn’t have built-in table grills where you can cook your own food or an “all you can eat menu” which lately is common of most Korean restos. Instead, they offer typical Korean dishes and some classic favorites like Beef Bulgogi, Bibimpap, Kimbap, Tempuras and Dumplings. They cook the food for you in their open kitchen and it is served at your table by wonderful staff. The experience is more personal and takes away from the fussiness of cooking your own food. Matjip’s specialty and signature dish are the Korean Fried Chicken and Bulgogi. Which are absolutely delicious. 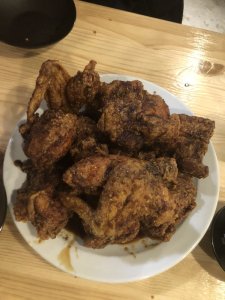 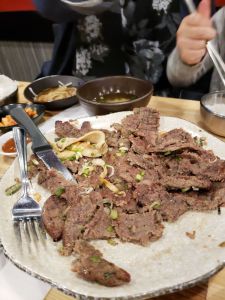 Having sampled the food at Matjip twice now, firstly upon opening. I was surprised at the quality and quantity of food. On our first visit, we sampled a large portion of Spicy Garlic & Soy Korean Fried chicken for $ 21.99, shared between three persons. We received the usual complimentary miso soup, kimchi and bean sprouts entrees. We also ordered a large portion of bibimbap with shredded pieces of beef to sample. Slathered in spicy garlic sauce and soy, the morsels of chicken legs were tender and juicy and finger licking good. They were totally addictive, strong on the garlic, but super flavorful and a powerhouse of flavors. The Fried Chicken is admittingly, their main draw and a good start. I was surprised at the more than a generation portion we received for the cost and had enough leftover for another meal the next day. 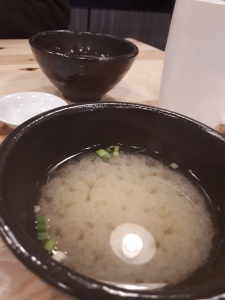 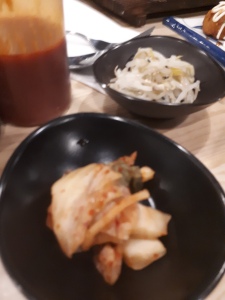 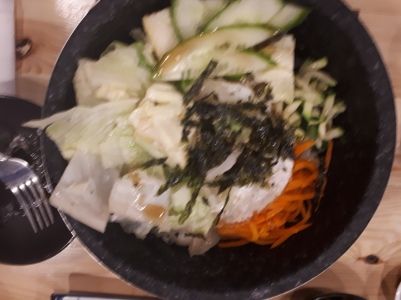 On the second visit, we decided last minute to have an impromptu meal between friends, after our walk to the mall. We were feeling more like noshing, than a hungry man meal, so we went lighter on the food choices. We started again with the miso soup and kimchi. We decided to sample the shrimp tempura, Takoyaki and two types of bibimbap (Vegetarian & Beef) between us. The crispy shrimp tempura was perfectly deep fried in light panko breadcrumbs and came with a light soya sauce for dipping. The shrimps were fresh and did not taste overly oily or rancid. The Takoyaki, were also to our likely, perfect round balls of fried octopi morsels in light sesame dressing. Both Bibimbap’s were tasty, each with its own special flavors and with the right balance of rice, vegetables, fried tempura and topped with fried egg. The one containing the beef is the way to go if you want more sustenance and protein. 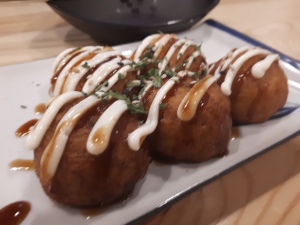 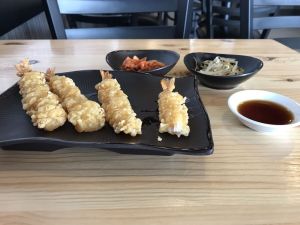 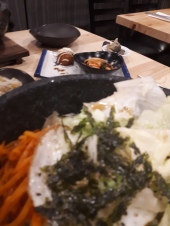 The décor which is streamlined, simple and clean, has not changed much since the last establishment renovations. The main draw is the wall paper containing writings on the wall listing their menu items, which is funky and cool. It previously referred to Italian food items, these days they pertain more to Korean Cuisine. The furniture also is a mainstay, with a series of wood top tables and black chairs. The large TV screens now advertise, their menu, instead of the depressing news of the day or sports games. 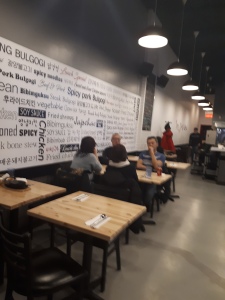 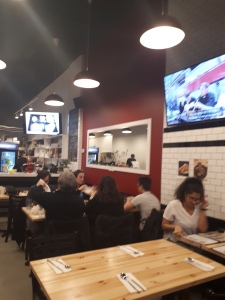 Looking inside one can’t help but feel that it is another fast food restaurant, but once you are inside and greeted by a sweet smiling hostess and given the usual complimentary entrees the feeling dissipates. The mood is Zen, calm and service is not rushed. You can linger for as long as you want. Another main draws to Matjip, is the Ragout of Pork Loin on Bone with Potatoes and Zucchini vegetable pancakes, if you are feeling adventurous. We saw an Asian couple at the next table eating this and it was huge, we got a sense of real homemade Korean cooking. 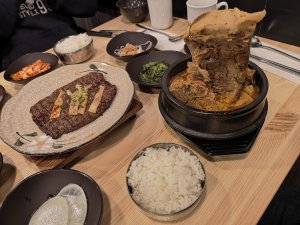 Due to popular demand, and sampled for take out, they are now selling Bento lunch boxes filled will all your favorites for only $12.99, which gives you a taste of three types of fried chicken or bulgogi, fried dumplings steamed rice, kimchi, a salad, and miso soup. A very good deal. Matjip is a welcome change to a neighborhood that is overrun with chain restaurants, fast food, Italian and Greek and lots of the same old thing.