After almost a decade in business, Grumman’ 78 is not only synonymous with local food trucks and their inception, but is a familiar name for many Montreal foodies who crave some of the best and original tacos this town has to offer. The other commonality is the familiar face of Gaëlle Cerf, who is not only a co-founder of Grumman’78 truck and restaurant, along with Hilary McGowan; but also, a founder of the YUL Eats food festival held in the Old Port every September. The pioneer and spokesperson for the Association des Restauranteur de la Rue du Quebec, she is a fighter and a warrior and can single handedly be credited for food trucks finally having visibility on Montreal streets.

It all started back in 2010, when Gaëlle was helping out her two friends who had purchased a truck and wanted to begin serving food with it. After an eight-year stint at Pied du Cochon as manager, Gaëlle, joined forces with Hillary and Leclerc and the famous taco truck was born. The current restaurant a former garage located in St. Henri, was their kitchen during the truck’s onset. Due to popular demand, the space was then transformed into a full-fledged restaurant during the Christmas holidays of that same year. Offering a fusion of Mexican influenced dishes with a specific flair that is genuinely Montreal in flavor and sensibility.

A little history and anecdote to help you understand the efforts of the food truck industry and the struggle to get where we are today. Food Trucks were banned in Montreal as far back as 1947, when the soon to be mayor Jean Drapeau outlawed French Fry trucks because he found them to be unsanitary, undignified and an eyesore. He had a different vision for the city, that would cost tax payers lots of money for years to come. In banning the food trucks, he also prevented the city from evolving with the rest of the culinary world in terms of street food, it threw us back decades. It was only in 2012, that serious talk of allowing food trucks back on the streets on Montreal started up again. In the forefront was Gaëlle Cerf, who fought for the idea. Up to now, only a handful of Montreal street vendors were allowed to sell food at special events and festivals. The ban was finally lifted in 2013, by then Mayor Michael Applebaum days before his arrest on fraud charges, when he announced the end of the ban by symbolically munching on a Grumman’s pulled pork taco on the steps of city hall. The rest is history, but Gaëlle Cerf and the Grumman’78 truck are not only the oldest truck, but considered the pioneers of the food truck movement in Montreal. 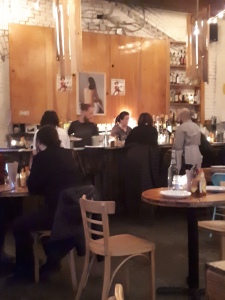 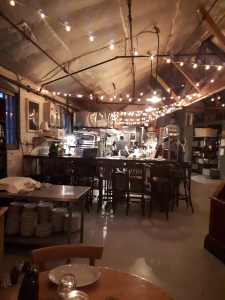 Grumman’78 has a cult following, wither it be the food truck or restaurant. It holds a special place in the hearts of many foodies and patrons as I surmised this week, while visiting the St. Henri location. I discovered its warmth, its great atmosphere and its casual yet eclectic surroundings.  Grumman ’78 is in fact very unique and owners Gaëlle Cerf, who is still very hands, was behind the bar mostly talking to patrons and staff. Not only is she super hospitable, but funny too and her stories are very enlightening when talking about Grumman’78.  In a domain that is hard and discriminating she has created a really nice niche and a fun establishment that is not only hip and cool, but very accommodating to all age groups.

The restaurant décor is low key but very spacious. The seating capacity is 90 seats at best, with a maximum capacity for 150 guests and plenty of room to host weddings. The space is funky, eclectic and kitschy. Its industrial space is lined with white painted brick walls and small hanging lights that are subdued and relaxing. With a mixture of wooden tables and chairs, the look and feel is rustic and heartwarming. A throwback to simpler fun times. 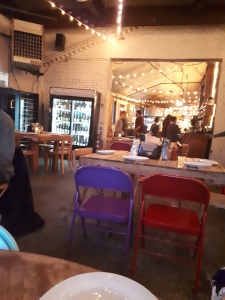 Grumman’s menu is very affordable and the dishes are not only delicious, but special care and detail is taken by chef Sébastien Harrison Cloutier to create an original menu showcasing local products. There are dishes to please all palates. But the tacos are a must. You will find the pulled pork and fish tacos anytime, along with a plethora of sides, such as Pakoras, French Fries, Gourmet Salads and appetizers such as Raw Salmon. Main Meals consist of some type of meat or chicken dish depending on the menu that week. 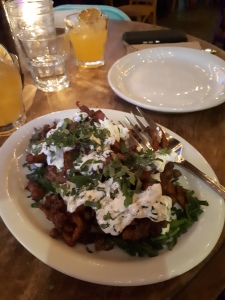 Their wine list is extensive with many private imports and organic wines. The cocktails are original and thirst quenching. We sampled the margaritas that went well with most of the dishes on the menu that are Mexican inspired or otherwise. We had the pleasure of being invited to Grumman’78 this evening for a launch of their new Limited Edition Lightspeed Taco, exclusively available at Grumman’s till May 15th, A bite sized version will also be served to 1000 guests at Quebec’s esteemed Les Lauriers’ Awards being held on April 29th.  Lightspeed , a montreal based company  that provides different software platforms for the hospitality industry, developed the POS system at Grumman’s ’78 and at many other amazing restaurants in town. They helped companies achieve success by promoting the best possible experience for their customers and staff. They have even come up with a Self Service app that will allow staff to place orders right from their phones and at the table, helping with sales and to reduce margin for error. Together with the team ,Gaelle wanted to do something special and since Lightspeed has revolutionized how they work , it is only becoming to pay hommage to them by naming this special taco after them.

The taco was inspired by a “Quebec in Spring” theme.  The gluten free dish features homemade halibut gravlax, with a tart rhubarb relish and a cream of poblano peppers with hints of parsley served on a homemade deep-fried Tostada.  It was absolutely delicious and different in every way. The Cru Halibut Gravlax was delicate and super fresh. The crema of the sweet rhubarb and poblano pepper a perfect blend of sweetness and acidic flavors that enhanced the halibut giving it a freshness of spring and a revival of nature. 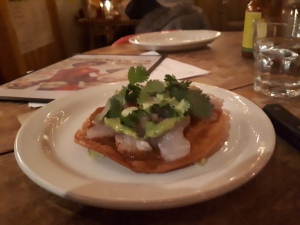 We did not stop there, we started our meal with margaritas, not the usual lime margaritas found in Mexican restaurants, but infused with a citrus blend, refreshing and pleasing on the taste buds with the perfect kick of tequila and salt.

We also sampled a side order of Pakoras, small fritters made with green peas and onion and Indian spices, served with a refreshingly flavorful sour cream/ yogurt type Aioli sauce topped with plenty fresh herbs of cilantro and parsley. 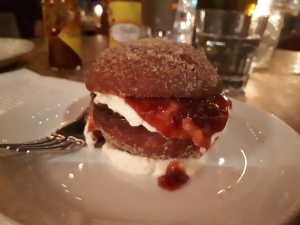 For dessert, we sampled the doughnut made with rhubarb/ plum sauce and whipped cream. It was delicious and the perfect end to a fine meal. The desserts at Grumman’78 are also a must, decadent and a sin if not sampled.

In summer, Grumman’78 has a large terrace that can accommodate a large crowd  and families alike. The atmosphere is festive, fun, cool and relaxed with no pretentions. Already planning my return to introduce my friends and family and dreaming about the next meal that I am going to have. That is unless, I see the food truck first, parked somewhere, then I am making a beeline straight for it.