Every once in a while, there is a local neighborhood that totally blows your mind. Lannes et Pacifiques a local corner street resto located on a busy stretch of Beaubien Street in La Petit Patrie is one of those places. Flying under the radar, this obscure and unpretentious restaurant offers creative seasonal takes on traditional market cuisine in a very casual shabby chic setting. Minimalistic and low key, the only outstanding feature in terms of décor is a 3-D painted Cubic mural alongside the east side of the restaurant wall. The rest of the décor is subdued with mish mash of furniture in different wood tones, a light green banquette run alongside one wall with low tables and a few pillows for comfortable back support. The center of the room has high tables and bar chairs, creating a wine bar setting for patrons who want to come in for a small bite and a bottle of their own wine to share with friends. At the end of the restaurant you will find an open kitchen, where if sitting close enough, you can watch the staff preparing your meal. The waiters and waitresses are hospitable and welcoming. The overall feeling is eclectic and fun. But what really stands out is the quality of food and the plate presentations. 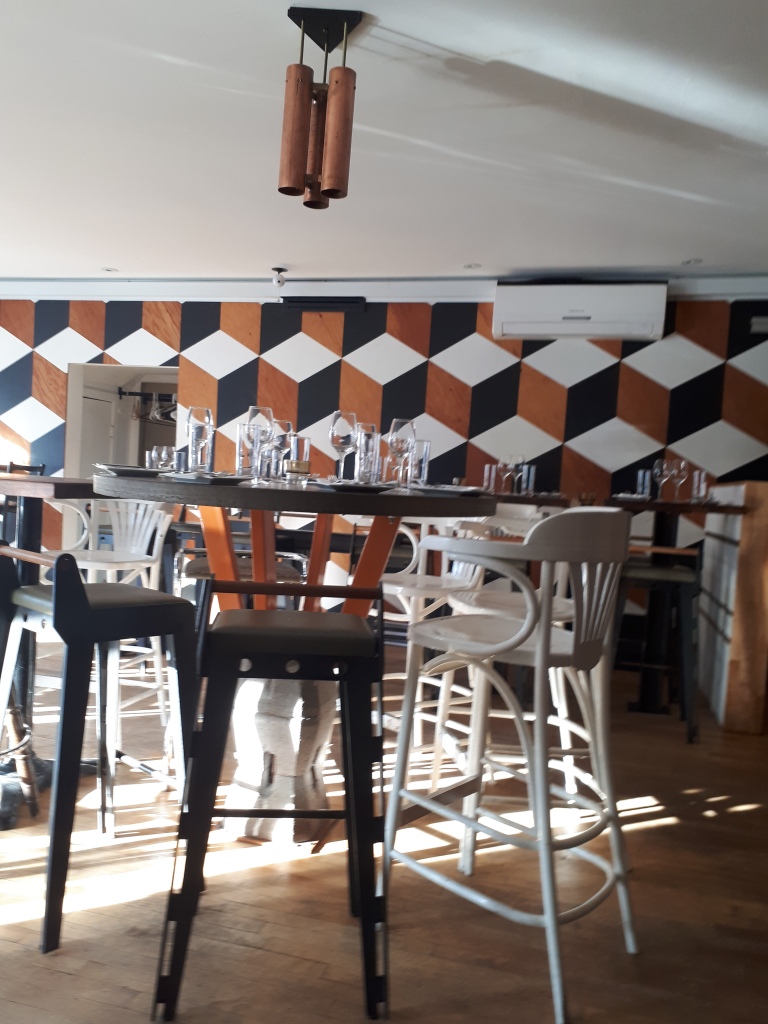 Lannes et Pacifiques has been open for 5 years now and is the latest on the roster of BYOB restos co- owned by Marc-André Paradis. For those who do not know his name, you may be familiar with some of his other BYOB establishments like O’ Thym, Les Canailles, Monsieur B, Le Wellington, Les Héritiers and Le Smoking Vallée, L’Entrepont, À l’Os and Les Infidèles. He has spearheaded some of Montreal’s Best and most popular BYOB restaurants in the city, to date, and has singlehandedly updated the BYOB scene here. All his restaurants are fantastic fine dining eateries with their own special take on French cuisine. Some of the restaurants listed above have since closed and some were sold off to make room for new ventures. But with Bistro Lannes & Pacifiques, this restaurateur has yet another hit on his hands. As for the name, it may sound like they specialize in seafood, but the name actually derives from the two former names of Beaubien street, many eons ago.

The times have changed, the BYOB’s of yore that we once knew of on Duluth and Prince Arthur streets of the 80’s is slowly dissipating and being replaced by the likes of restos such as Lannes et Pacifiques. I don’t care what anyone’s says, they may still like their Vieux Duluth but there is no comparison. This is evident with the discriminating palate of Lannes & Pacifiques clientele, as it is very hard to find a table and reservations are a must especially on busy nights.

Paradis and his partners/ chefs change with every new restaurant, so you are not getting the same thing. They are and are pretty on the ball when it comes to what the public wants in terms of décor and food. Their kitchens are being manned by some fine local and International chefs. Upon opening, Adam Lynas, was the chef at the time at Lannes et Pacifiques, but in 2016 left to return to Ireland to open his own place called La Taqueria. He has since been replaced by local chef Fabien Lapointe, who is cooking up a storm and creating original dishes which are not only pleasing to the palate but the eyes too.

There are two services on Friday and Saturday night, if you come during the early service, you are reminded that they need your table by a certain time, but we were not rushed out. They have a discovery menu starting at $ 55.00 and an a la carte menu for those who do not want to eat that much. The discovery menu here is the way to go. Unless, you are a big group and want to try everything on the menu and share.

A warning, the place gets noisy and is not for the fickle, those with hearing impairments or head issues. We sat at the corner table near the kitchen, and by the end of our meal, we could barely hear ourselves speak. It was exhausting, at 8:30 pm we did not need to be reminded that our table was needed, we ran out into the quietude of the street as soon as we finished our meal. The crowd is a mix of people, mature, mainly thirty something’s who want to come and enjoy an evening amongst friends and have a great meal. They play hip lounge music, but it’s drowned out by the chatter as the evening progresses. It not a quiet place to go to relax and have a romantic dinner out or even more if you want to talk and catch up, but more a type of place that has a particular buzz to it.

The service is impeccable and timely and is a big plus. We were seven people and ordered mostly everything on the menu, we received a complimentary bouché for everyone, which consisted of a small mini arancini made with creamy risotto, chives and a light rose sauce. The menu which usually consists of six entrées and main meals and four desserts, changes constantly. The prices a la carte vary around $ 15.00 for entrees and $ 30.00 plus for main meals, not inexpensive, but portions are ample and generous.

We started our entrée with a bottle of 2017 Petal de Rose, a light rosé wine from Provence France and a bottle of Campo Roja Temparanillo, to go with the heavier meat dishes. The Rosé was perfect with the entrée of deconstructed Tartare de Saumon, Croquette de Chèvre. The red went better with the Magret de Canard Fume, and a Foie Gras du Moment. 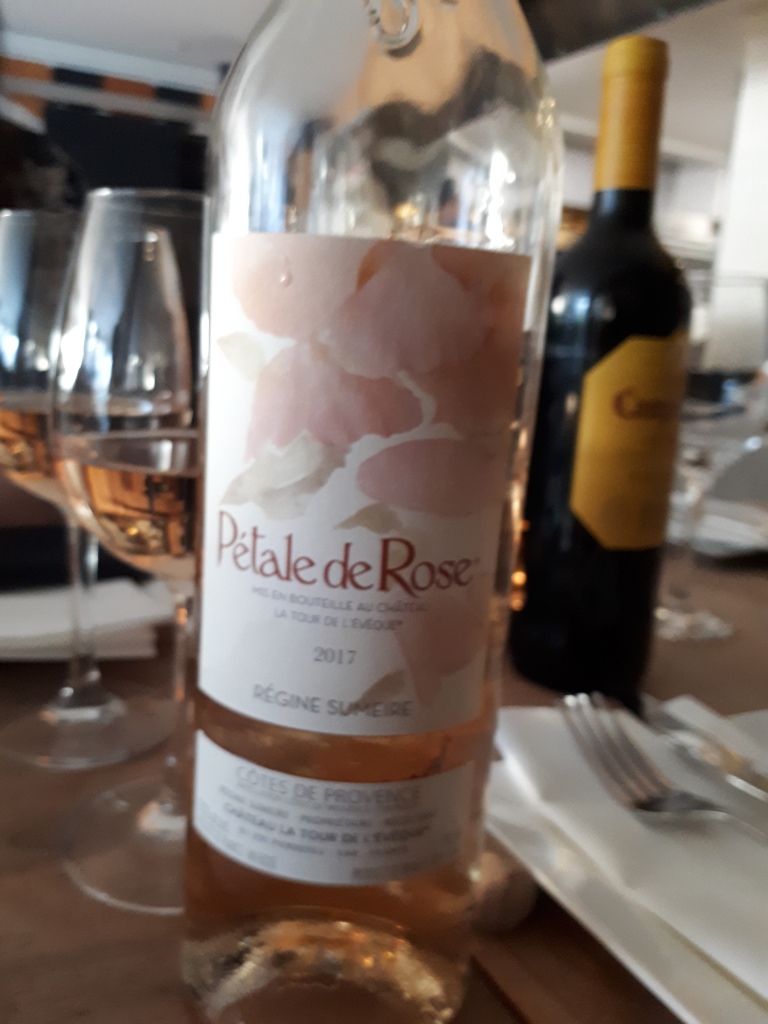 I loved the different plate presentations, the tartare was plated in a circle and deconstructed, with dabs of sour cream and portions of caramelized coconut infused with curry. The salmon was fresh and the dish was absolutely delicious and a game changer. The Magret de Canard, had a similar presentation but had thin slivers of duck, marinated eggplant and a citrus coulis, it tasted like a mini version of duck a l’ orange, an old classic dish done in a modern way. Both these dishes will set you back $ 15.00. 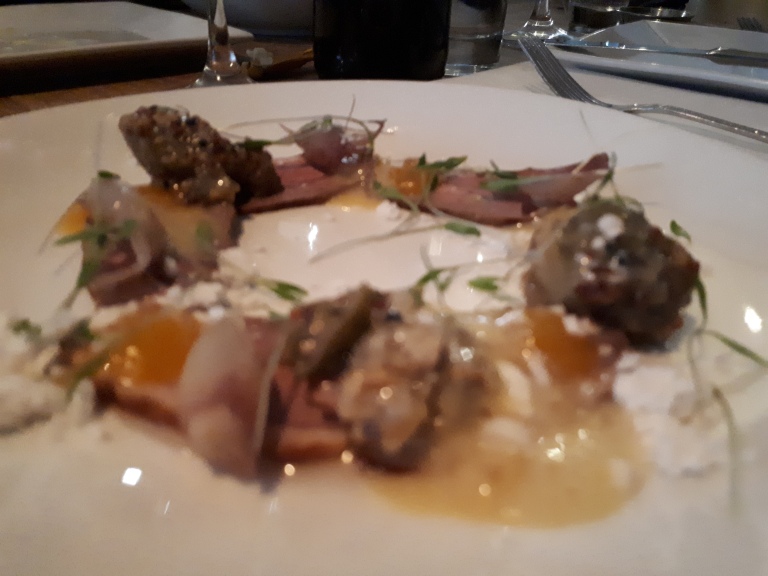 The Croquettes de Chevre, were another surprise and ample to for $ 14.00, served with bitter endive salad, lardons and crème fraiche infused with truffle oil, this was shared between four. Another dish that was ordered was the Flanc de Porc braised in a maple syrup bouillon with lentils and dabs of carrot puree for the same price. A pave of layered ham that was sweet and savory and could have passed for a main dish.

The layered foie gras was a little more expensive at $ 25.00, but a larger portion than the usual torchon served at other restaurants. It was layered with of blueberry gelatin center that gave it a sweetness and tang. It came served with a few baguette crostini. It hit the spot for most of the duck liver fans in our group and I was in heaven, as I got my usual fix, but paid the price later.

For the main meals, we sampled a plethora of items even though h we were full. We ordered the swordfish, Espadon Poêle, the Surlonge de Boeuf Baseball, Medallion de Ravioli Ratatouille, and a Risotto with Scallops. The swordfish was cooked perfectly, it came served with a sauce vierge, swirl of rutabaga and kale chips. Tender and delicious. 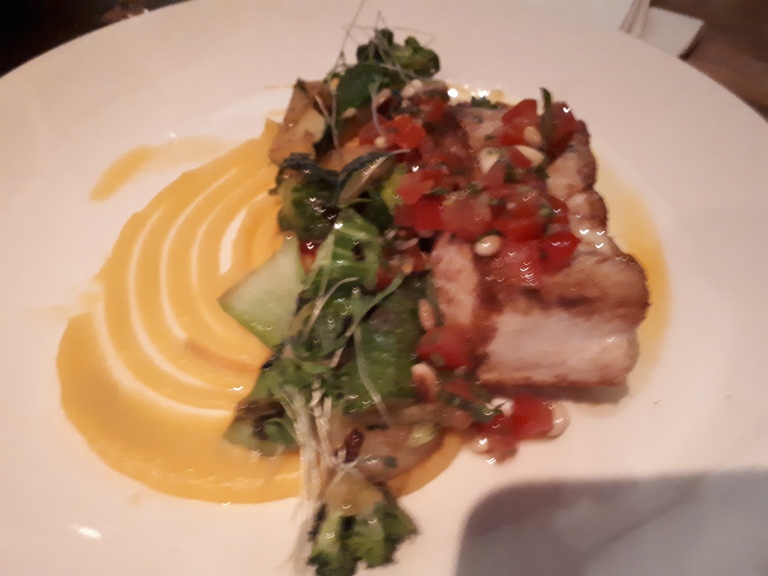 The Sirloin beef was a perfectly cooked medium rare and tender as well, served with broccoli and mushrooms in a port sauce. The large Medallion sized ravioli were also very original and different from the usual, stuffed with eggplant and topped with dabs of goat cheese, in an emulsion of creamy artichoke sauce and topped with pine nuts. Absolutely divine.

The risotto which won accolades this evening, my favorite, it had to be one of the best I have tried in a very long time. Creamy and smooth, it was very addictive. It came with served with three large perfectly cooked scallops. The base for the rice was a light green pea infused puree, with dry cherry tomato confit and light parmesan shaving. Each dish was just as good as the other and we were very satisfied with the overall meal.

For dessert, we decided on three to be shared amongst all. We opted for the crème brulée a la pistachio, a Bavaroises sherbet made with blackberries and praline cookie, and the Dome a la Cerise, all at $ 10.00. I must mention that Lannes et Pacifiques is not strong on the desserts, the crème brulée shaped in a square and was not much to look at, but it tasted good. The sherbet, was light and refreshing, but mediocre. The cherry bomb was a cute little chocolate bundle, decent tasting but too small to be shared, it reminded me of a maraschino chocolate we would by as kids. 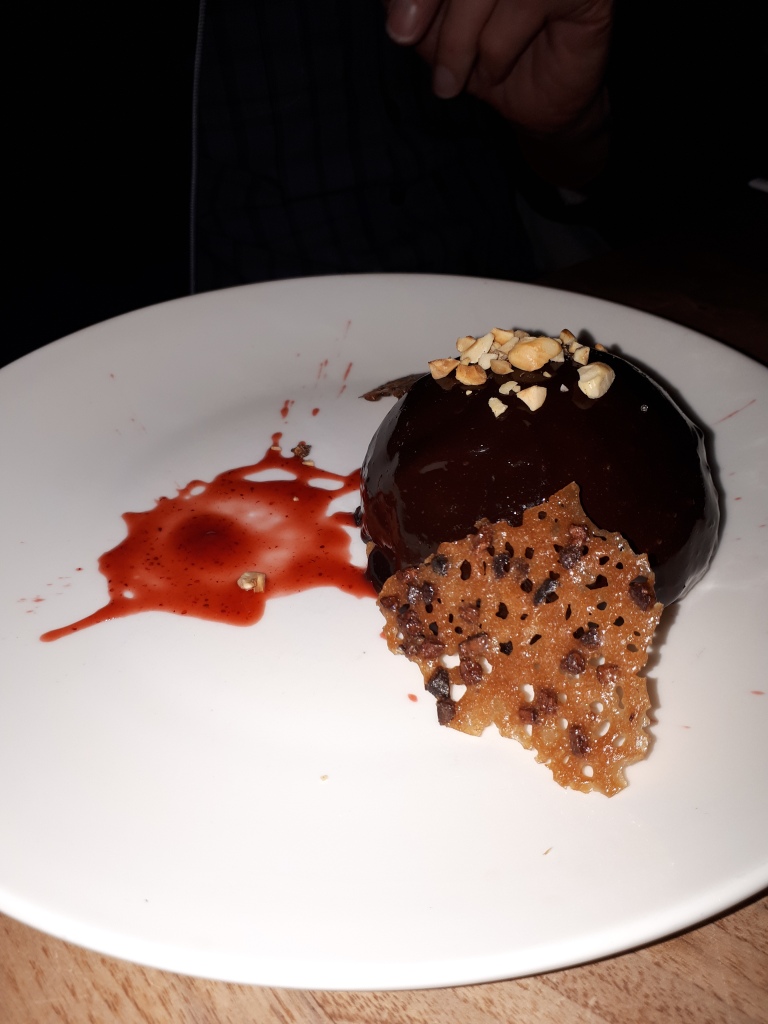 Dessert aside, I loved Lannes et Pacifiques, the ambiance, especially the food and the flavors. It is a definite recommendation and return for me, if not for the risotto alone.