Gia Ba is a small casual local Szechuan restaurant in the heart of Monkland village that has been serving typical Sichuan & Taiwanese cuisine for the last five years. Opened in May 2014, by chef Andy Su, whose previous experience was not only working in many hotel restaurants before coming to Montreal, but whose knowledge of the restaurant business took shape when he was part owner of the restaurant Cuisine Szechuan on upper Guy street.

When Gia Ba opened it was all the rave and a very welcome new comer for the neighborhood and the landscape, after le Caveau de Szechwan closed down after being in operations for many years a few street corners away. There was quite a buzz around it and it became a hangout for many local chefs would frequent Gia Ba on their days off, as would locals and those from afar who heard about it through word of mouth.

For many Szechuan food means comfort and Gia Ba falls into this category. The restaurant is simple and unpretentious. After climbing a few steps up from street level, you are greeted to a restaurant that has more of a bistro feel than an Asian Emporium. With Its subdued cream walls and only hints of red in the leather seating the decor is very minimalistic and low key, compared to many Asian eateries, which it becomes central and an offense to the senses. The only thing that gave away the type of cuisine being served here was the nook near the bay window that seats a group of six or more. Decorated like your own private tatami room with a slew of Chinese embellished seat cushions, the nook is picturesque and private, with a view on the street, but not unfortunately not good for those who need back support for two hours of dining.

Gia Ba, which means “pleasantly full,” is what you will be feeling as you will find many of your favorite dishes on the menu at reasonable prices. It also serves some Taiwanese dishes, as Andy Su is of Taiwanese descent. The entrees consist of an assortment of soups, dumplings and imperial rolls. The menu is divided between Chicken, Beef, Pork, Vegetable, and Other. The have a wine list and some pretty good Asian beers.

We started with some tea and an entrée of fried dumplings, six pockets of gyozas, filled with ground pork and vegetables, probably leek. We split the entrée between two, leaving us with enough room for the main meal. The dumplings were fresh and pleasantly tasting. No rancid after taste, or overpowering flavors of onions.

For mains, we each ordered our own dish, not shared, of General Tao Chicken and Szechuan Pepper Chicken with Crispy Spinach, Chicken with Cashew and vegetables, Gong Bao Chicken with Peanuts for $ 13.95 each. All were very good and to our liking, but I couldn’t help but feel that something was lacking.

The General Tao’s chicken was crispy and savory, but lacked the strong aromatic flavors that come with that dish and the fiery kick was also missing, the same can be said about the Pepper chicken with crispy spinach.

The Chicken with Cashews was also generic, but that can be expected from this Taiwanese dish.

The Gong Bao Chicken was the winner here and more satisfying than other versions sampled elsewhere.

I couldn’t help but feel that the oomph factor was missing with many of the dishes. Maybe when it first opened, Gia Ba hit the mark, but five years later it has settled into complacency. What we liked about the whole experience was the company and the location which was central for all of us. 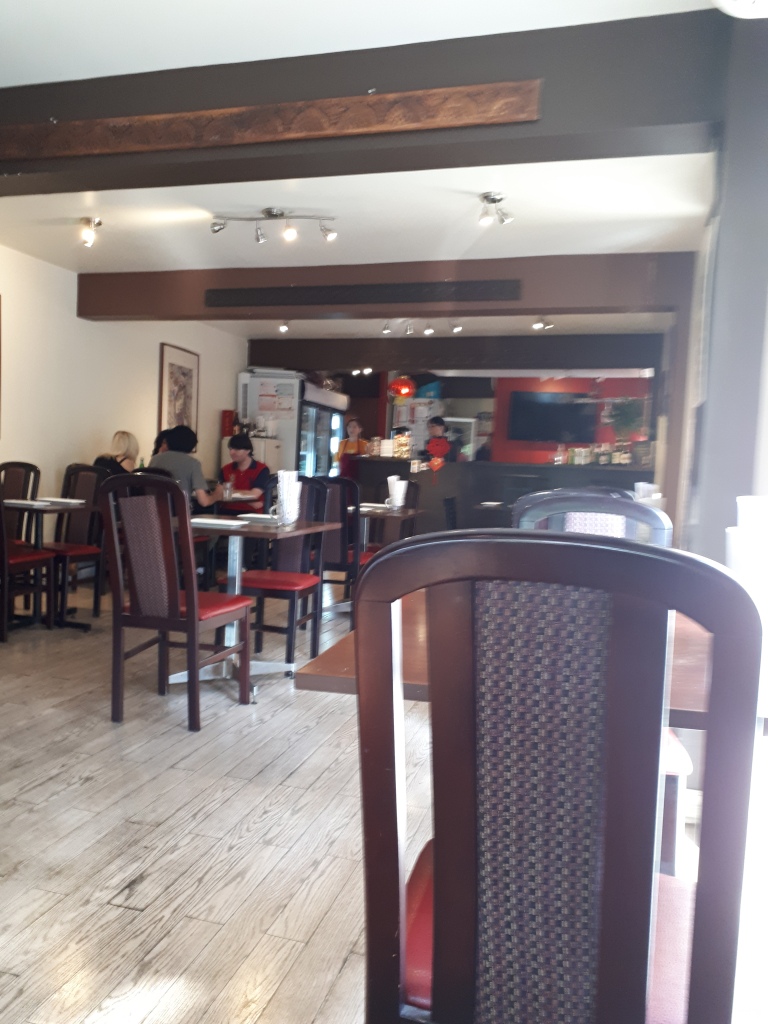 All that being said, it is not bad for a local restaurant that caters to the cravings of the local masses. The good thing is that one does not need to venture too far to have some good comfort food. For someone who has wanted to try out Gia Ba for the last four years the restaurant not only fell short on originality but in service and hospitality. I also found the ventilation system too loud from where we were sitting and the place was very empty for a Saturday night and felt deserted. I could not help but feel that Szechuan food is a thing of the past. In its heyday, it was fantastic and a novelty, these days these they are being replaced with Izakaya’s, Dumpling only eateries and Korean restaurants. They are becoming sparse and people have ventured on to newer cuisine. Let’s hope they survive, I sure like my General Tao’s chicken.