Le Filet has become in the last ten years, one of Montreal’s finer dining establishments. It is not a surprise to any Montreal foodie,  because of the culinary names associated with it.  Owned by the team behind Club Chasse et Peche and  Le Serpent, Claude Pelletier and Hubert Marsolais names are synonymous with fine dining in Montreal. Their restaurants have received winning accolades in this city gastronomic circles. Le Filet is Club Chasse et Peche little sister restaurant, but it does not trail  too behind in its counterparts in quality, menu and originality, but it is in a class all on its own. Located across Jeanne Mance Park on Mont Royal Avenue near Park, it is hugely popular with the branché crowd of Plateau and Mile End. It is on the top of the bucket list for most foodies, trend setters and Instagrammers.   All the dishes served here are masterfully composed and extremely delicious and most picture worthy.

Opened in 2011, it has vowed dinners with its eclectic French-Quebec menu and creative dishes . To many Montrealer’s, the name may sound  banal and it remains in most part obscure for many Montrealer’s.  For those who have had the benefit to cross its threshold, its popularity is evident. Over the years, it has garnished quite a reputation for being a very hip place to go mingle with local celebrities, hang out with friends and enjoy the meal of your life.

A warning for those hard of hearing  who like quiet places, Le Filet can get very loud, inside and out. The noise levels inside can reach high decibels as it rebounds off walls, The music tends to blare louder than normal. Outside on the terrace, even in the summer, the engines of loud revving cars, make it a nuisance. It is a after all a place to party and enjoy life, the bigger the noise the merrier the crowd.

Its décor with its gold paneled walls also may scream out to many. But their color give an aura of spaciousness and an added dimension . Its look rich and eloquent even though the layout is actually very small and narrow . All that being said, it is is comfortable and quaint. It’s outdoor terrace overlooking Jeanne-Mance Park seats about 30 people and is a great addition to the summer dining months. I was a little wary of sitting on the terrace as it was the  scene of a spectacular accident in Nov 2012, where a speeding car lost control, spun in the air and landed on the terrace wedged under the stairs. Fortunately, it happened late at night when the restaurant was closed. But it left quite an impression, no pun intended. It has been  nine years since but it has grown to become a great restaurant to dine at.

The menu at Le Filet  tends to lean towards fish and shellfish, but you can also expect the usual Quebec standards like foie gras, duck, and beef. Chef Yasuhisa Okazaki, has manned the kitchen at Le Filet for a decade now. His presentations and pairing of food are masterful, leaning towards French -Asian fusion. Great talent here and totally underrated. The wine list is also fantastic, with a good choice of private imports and variety of classic wines. Their classic cocktails list seems to be cool as well, in a “Mad Men” sort of way with drinks of yore and some new listings. The sommelier at Le Filet is Patrick St Vincent is also executive sommelier at Club Chasse et Peche.

The evening we dined at Le Filet, we started with a glass of bio-organic orange wine, we sampled as entrees, the Tuna Tartare with egg confit and Nori, the Wagyu beef, with eggplant, oyster mushrooms and miso. Marinated Organic salmon, with beet puree, wasabi and topped with a stuffed zucchini flower. 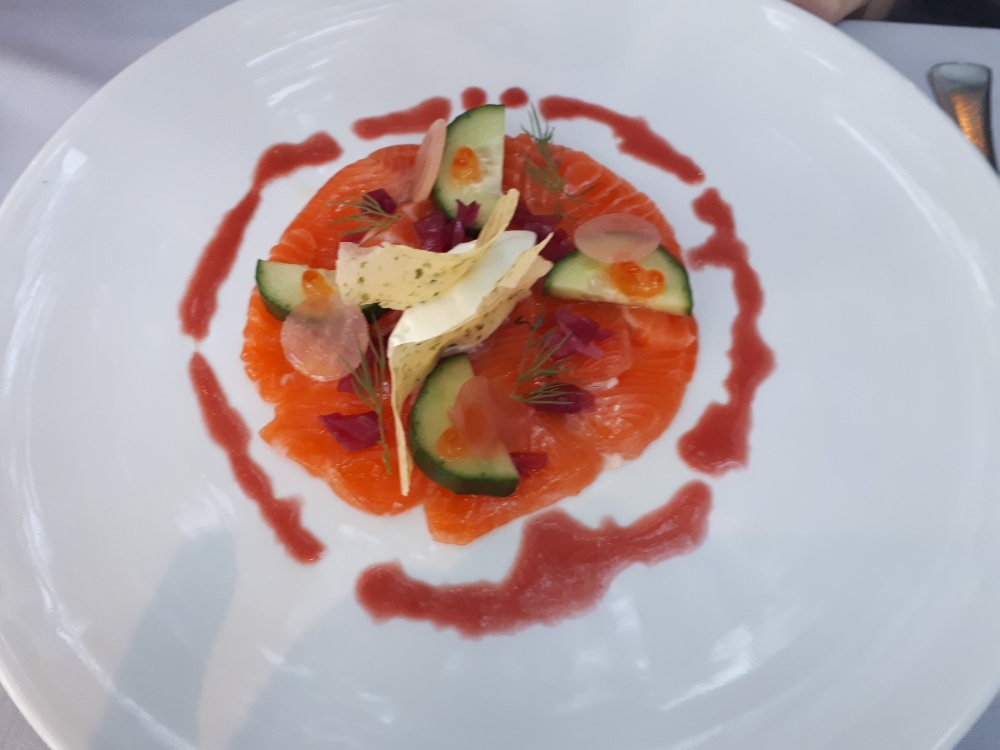 The tuna tartare was sliced very thin and served as a carpaccio instead of the emporte-piece molded typical tower shaped tartare most restaurants serve it as. It was refreshing with sliced half mooned cucumber pieces, a drizzle of coulis and marinated red onions and slivers of water chestnuts. I did not see or taste the fishy Noori or egg confit as one usually sees it in its normal form, but the dish was extremely delicious and light. It was came served with 2 baguette slices.

The Wagyu beef portion was generous. Served with grilled eggplant base and topped with miso oyster mushrooms and shallots. It was tender and very original. Almost teriyaki style but definitely an Asian inspired dish. 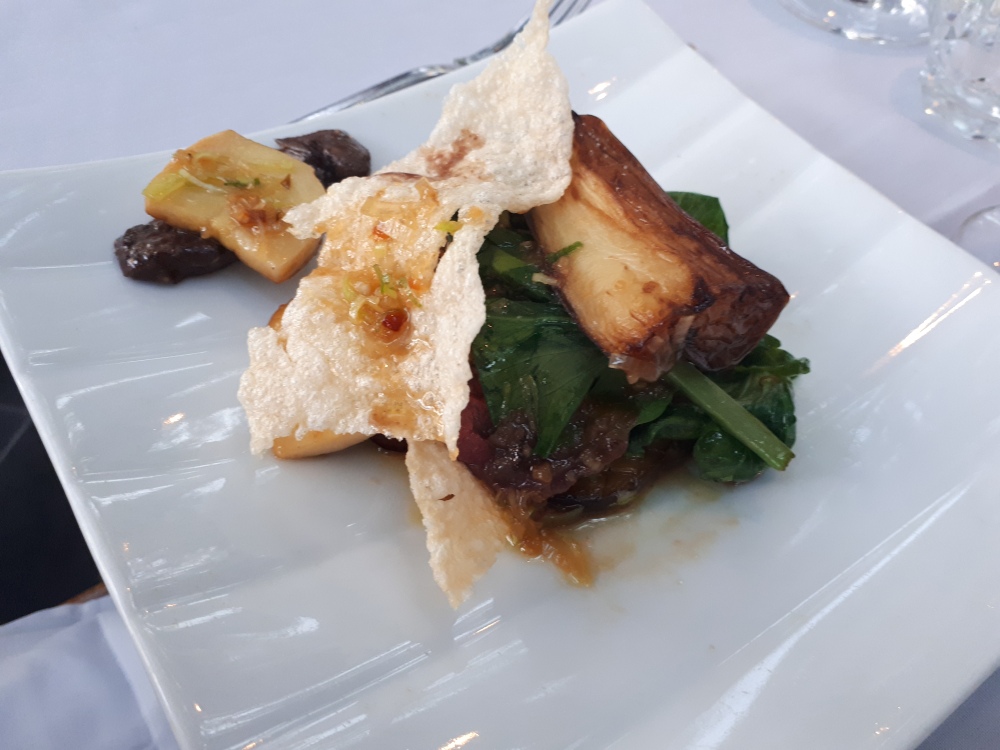 For our main meal, we chose Marinated Organic salmon, with beet puree, wasabi and topped with a stuffed zucchini flower. Squid Ink linguini, with lobster and crispy shallots and Roasted Veal from Quebec with Chanterelle mushrooms, with fresh green peas. 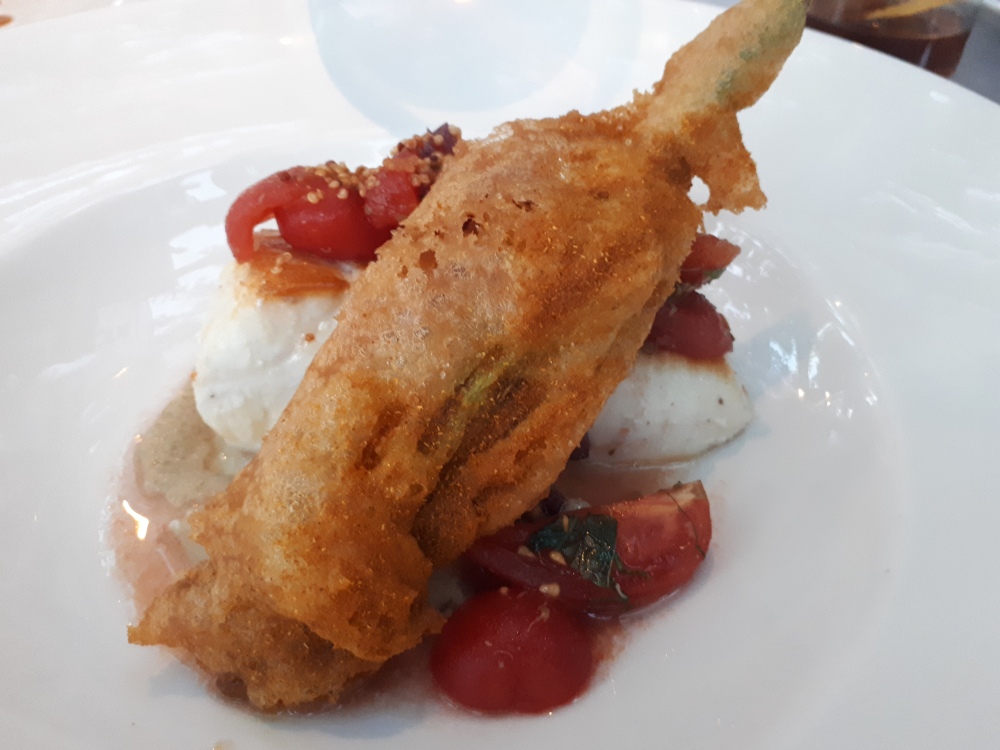 The marinated Organic Cod was part of the entrée, but was served as a main meal. It came served atop a bed of beet puree that contained a hint of kick of wasabi. It was light a delicate. The fish, resembled cod, they could have changed it out last minute, but it was cooked to perfection, flaky, light and very fresh. It came topped to my surprise with a stuffed ricotta cheese zucchini flower that was deep fried, crispy light and delectable.

The squid ink Linguini was also very good. It came served with ample amounts of lobster and topped with slivers of zucchini and crispy onions that gave it texture and flavor.

The third main meal was roasted Veal from Quebec served with Chanterelles, fresh peas and a tempura of parmesan cheese. Our guest really raved about the veal. It came in a light sauce of its own jus. Tender and decadent.

The dessert was also very tasty and beautifully presented. We sampled the Maple syrup cake with whipped cream and pecans and also had the raspberry rose cream with pistachios and lychee sorbet. The Maple syrup cake was sweet but out of this world. The raspberry rose cream was light and heavenly. The nuts gave it texture and made all the difference.

Service is professional and impeccable. It is worth a return visit . Great bet for the die -hard foodie.