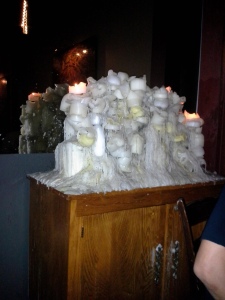 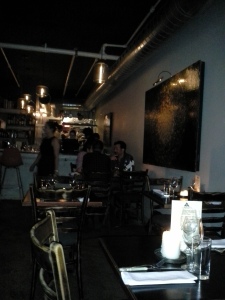 There is no doubt that the team behind Le Fantome is multi talented, they were voted #8 in En Route Magazine in 2016, a couple of months after they initially opened. Eater blog swears by them and Lesley Chesterman gave the restaurant a great review and dinners have kept coming for the last two years and it is not only the local residents of Griffin town that frequent Le Fantome but they come from all over town, to sample the ingenuity that emanates from this kitchen.

Jason Morris is the chef behind Le Fantome, a force to be reckoned with on many levels. His partner Kabir Kapoor comes from long lineage of restaurateurs, his Dad owns Le Taj downtown, a landmark restaurant that has been on the Montreal scene for over twenty years. This means he literally grew up in the restaurant business. This is evident in the manner in which he deals with his all his clientele. I can guarantee this, as I experience it first-hand this evening. He makes sure that when complete your meal that you are 100 % and completely satisfied. The hospitality at Le Fantome is amazing, the service outstanding, the food fresh, original, creative and out of this world. Yet this evening we experienced a few glitches, minor but enough to make you think twice about going back.

Relatively young, Le Fantome, opened in 2015, at first it was an a la carte menu with small plates under $20.00, then they switched to an only tasting menu for $ 65.00, the reasons only known to them. My guess is it makes it easier for the kitchen staff and produces less wastage. Forewarning, their website literally has no menu posted and no indication of what you are up against. The menu changes constantly on a weekly basis depending on local market produce. The meal is a total surprise and left to the discretion of the chef.

The menu is revealed to once you are seated and ready to have your meal. Food allergies and food limitations can be accommodated but better to mention it when reserving. It is only when I called to confirm our reservations that it was explained to me that the tasting menu was the only choice we had. It was a take it or leave it situation and to some it may not be acceptable for them, but to any adventurous foodie it is exciting and a challenge. Foodies thrive on these situations and love to be awed and inspired. All that said, they are very accommodating and one of our diners just had dessert.

Once there, be prepared for lots of up selling by the wait staff, with additional costs if you want wine tasting with the nine course sampling menu and extras for some of the signature dishes. This is fine and almost expected as many restaurants do this as a way to increase profits. After all restaurants are a business and they do need to survive. Just go in expecting to pay more than $ 65.00 for your meal and bring extra cash if you feel like indulging.

I am prepared to spend my hard earned cash when it comes to having a great meal and a wonderful experience. I like transparency from the onset and dislike confusion especially with the tab at the end of the meal.Do not share the desserts it will save you a headache at the end of the evening. The manner in which he tab is calculated here gets confusing and was such a source of irritation this evening to the point it spoiled our whole experience.

We had a piece of bread charged twice, a sandwich the size of a thumbnail charged 4 times and a piece of cheese charged three times on a tab for two. It was very confusing and to add insult to injury when we asked for an explanation, our waitress got nervous, fumbled with fractions and insisted repetitively this is how they do things. It then escalated into an argument when people were confused and asked for a better explanation. After five glasses of wine, a CPA wouldn’t understand their methods and reasons. Argh.

No matter what the cost, the portions sizes for the dishes we received were way too small. Le Fantome takes the word tasting menu to a whole other level. Two to three bites per dish, enough to savor and tease. With nine courses, this should have been enough, but it was not. I was still hungry and I have a small appetite.
Nonetheless, the food was delicious and left you craving for more.

We all started with wine or cocktails, I had the Sazerac Cocktail, and yes it originated from Louisiana, but was told it was a mix of rye and whisky created in Quebec during the prohibition era. Ugh! 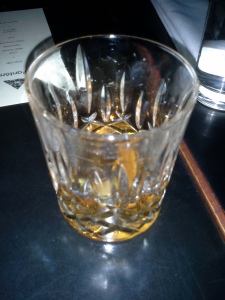 Brains had the Fantypop, a mix of Fanta & Bubbly. It was weak attempt and version of a Mimosa. 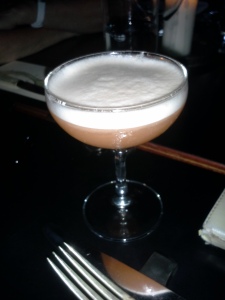 Mizz Oz and Miss Ross had the wine pairing, five selected wines by the sommelier which was the best route to go, at an additional cost of $ 50.00 above the $ 65.00 cost for the tasting menu plus the extras. Barbie had the glass of Kepos-Toscana at $ 12.00 which went well with the meat dishes in the menu like the Veal and duck. 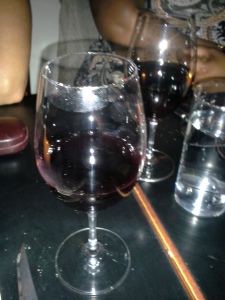 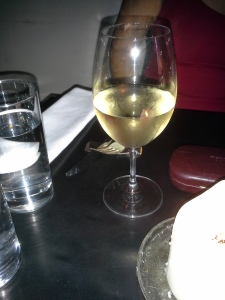 We were served a convivial Amuse Bouche called Popcorn. A large corn puff styled in the shape of a large chip that was set in the middle of the table atop a bowl that was too small to hold it. The dish was meant to be shared between four people. Crunchy and Sweet with drizzle of maple syrup and sugar. It reminded me of a larger version of a Munchos chip but sweet. Not a much of a teaser but definitely original. 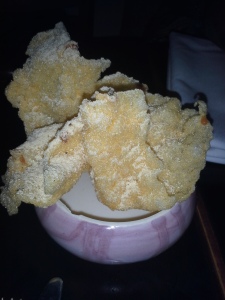 Next was a dish called Bagel, a pave of cured smoked Salmon, atop a smear of cream cheese and a mix of black poppy and sesame seeds and crispy onions. I loved this, the name sake comes from the fact it tasted like a bagel minus the bagel. Simply delicious and perfect for those on a gluten free diet. 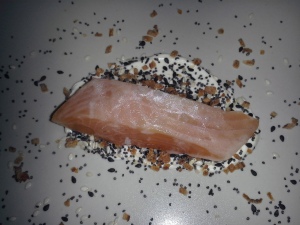 Next we had the Veal Tonnato, thinly sliced slivers of veal, on top of a potatoe puree and a beet in a wine reduction sauce as a base. The dish was very tasty, the flavours exploded in your mouth. The dish was flavourful but insufficient to get the full benefits, two bites and it was gone. Beautifully paired, I did not understand why it is called Tonnato, as the description stipulated; it did not contain any trace of tuna unless it came masterfully masked. I had no semblance or taste in my dish. 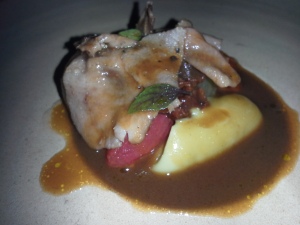 Set on the table to be shared again was a slab of homemade Corn Bread and herbed butter. Not the usual corn bread that I am accustomed to, this one had a healthy crust and was moist on the inside. It was also considered as one of our courses. I do not feel it can be categorized as such. Nonetheless, it was good and decadent with the herbed butter. I loaded up on the bread to fill me up. 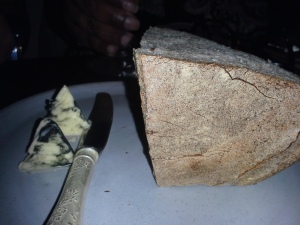 Next we had the Orrechiette with peas & bacon. Le Fantome`s version of Mac and Cheese but a zillion times better. The portion we received was creamy and flavourful with pops of fresh peas against the saltiness of the bacon. The Orrechiette looked more like long Cavatelli. Portion were again too small, two bouchées and it was gone. 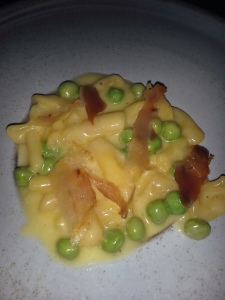 Next sampler was Flounder with slivers of radishes and fruit with raspberry foam. The flounder shaped like a terrine and sliced thinly. Topped with two types of radishes, that may have been marinated. A simple dish with not much accoutrements, and it married well with the sweetest of the foam and added a kick to otherwise bland fish. 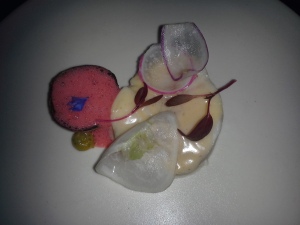 The piece de resistance was the Duck Breast Magret with a puree of celery root and rondelle of aubergines in a jus decorated with edible flowers. Everyone loved this dish and said it was the best. I agree. The duck was perfect, very tender and not at all fatty. 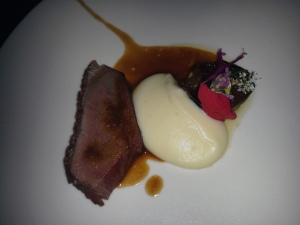 Next we ordered a dish called Bisaillon cheese for an additional $ 5.00 split four ways. Made with a goat cheese base served warm à la crème brulee style. The top crust melting into a warm cheese that once spread on the crisps combined a phletora of flavours and textures of sweet, crunchy and creamy. This dish was original and wonderful. Considered more of a teaser than a meal, we got one spoonful each. The nutty bread crisps were packed with grains, cranberries and sunflower seeds. . 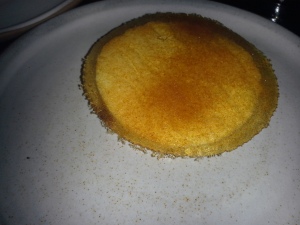 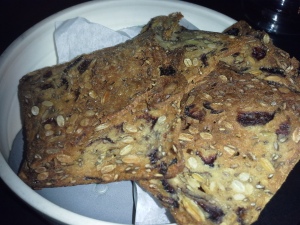 We couldn’t resist ordering their signature PFGJ Sandwich. Peanut butter, foie gras and jelly sandwich for $ 15.00.
Like Joe Beef, who has its double down sandwich, Le Fantome has their foie gras sandwich. I have to admit I loved this. It came served in a whimsical paper take out bag with a ghost drawn on the front. Again shared by four it was too small to enjoy. Have a stab at it alone, totally worth it. 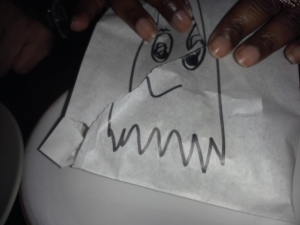 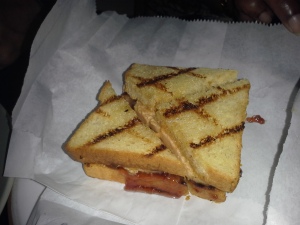 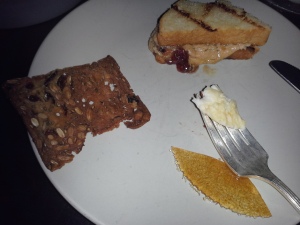 Finally, to end our meal a dessert called Volcanic Ice. The dessert was a cross between a red velvet cake and AERO chocolate bar. Atop a sour cream quenelles that made it à la mode. The name Volcanic perfectly coined as it was hard on the top with a red volcanic icing yet airy and bubbly on the inside like an Aero bar. Simple yet delicious. Coffees, cappuccinos, espressos and teas capped off the meal with port for those who took the wine pairing. 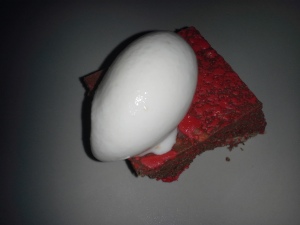 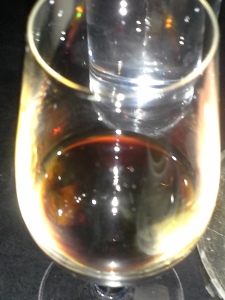 I have to give Le Fantome 5 stars for their food creativity and masterful skilled presentations. Jason Morris is very talented and his talent is obviously on display here. I knew this when I decided to visit Le Fantome after seeing his skill at the Omnivore Master demos in 2016. But after the kerfuffle with the tab, and the complaints I got from my fellow dinners that dishes were too small for the $ 65.00 plus price we paid. I have to take off points for the minor glitches experienced at the end of the meal and the price quality rapport. We sort of felt bamboozled into paying for something that was not clear and above all felt short changed. But these things happen especially when we have no control over our choices. Warning: just go without prejudice you will be awed by the food alone.