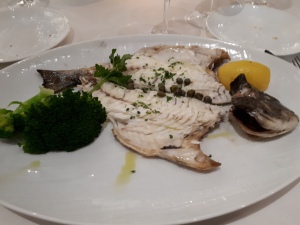 Milos, is a Montreal institution and great success story in the world of restaurateurs. It can be counted amongst the few who over time, not only have survived, but expanded and morphed into something better than the original concept. For over thirty-five years it has dominated the realm of Greek food in a city that is not only discerning but discriminating when it comes to dining out. From its humble beginnings, it has grown into an empire that spans across the globe. Including locations in New York, Miami, Las Vegas, Athens and London.

The man behind Milos, Costa Spiliadis, made it his mission to showcase simple authentic Greek food to Montreal after he came here to study. He felt that Greek food was being misrepresented here and worldwide and he wanted to bring to us the Greek food he had eaten in his mom’s kitchen. His reputation and that of Milos have followed him everywhere, its name is synonymous with fresh seafood, a great ambiance and the epitome of class.

Flagship Milos has always had a fantastic reputation as being the premiere spot to have fish and copious amounts of seafood. The reason the Montreal Foo Foodie stayed away all these years was basically the cost. Many years ago, I was told by some friends who dined there that it would cost me about $ 80.00 alone for a meal. This was going as far back as the late 1980’s. For a young couple just starting off it was out of the question. So, we dined at all the Greek restaurants in the environs, Psotaverna Symposium & Mythos on special occasions, Arachova around the corner on St. Viateur weekly. Today, I have spent more than $ 100 in one sitting at many a restaurant just for myself. When it comes to good food, there is no limit for this obsessed foodie. So, when I heard about the late-night cheapie dinners for $ 25.00, I booked a date with my dinning friends; as we now had no excuses to sample some of Milos fine food. The late-night dinners were started for just that reason, to allow the younger generation and those who had not been to finally experience some fine Greek food. What a great idea, I thought!

The great idea soon turned to disappointment, when we received our entrees, the portions were miniscule. Watching the salad station and the pile of delicious plump tomatoes gave me a craving for a good Greek salad. I watched the last lobster leave the fish tank, I had hopes it would be delivered to my table. In my opinion, if you cannot sample all Milos has to offer, there is really no purpose to dine here. For $ 25.00 you will get exactly that amount worth of food which is not exactly a whole lot. Just enough to dip your feet in the water. For the proverbial foodie whose mission is to sample everything this defies reason and purpose. What you do get ample of is ambiance and you pay the price for it.

The décor is opulent, long gone are the fish nets hanging from the ceiling and the dark interiors that exuded the feeling of a small fishing village in the Greek islands. Milos has totally been revamped since its inception. The restaurant has doubled in size, with bright lighting that makes everything sparkle, it is a shining gem. They have a cool bar for just a drink and quick bite, an open concept salad station that entices your palate and a private cellar in the basement.
The spacious powder rooms are gorgeous and clean, you will have to take the winding staircases lined with large oversized gold vases to reach them. The restaurant from top to bottom exudes class and opulence only the way Greeks can do it.

The same can be said with the clientele. It is a place to go to be seen and is not for the shy at heart, it is ostentatious, loud and has chutzpah. Frequented by the likes of Celine Dion and other local celebrities, it is a place that commands attention, but don’t expect exceptional personalized service, unless you have a name. Service was slow, inconsistent and quirky. Our waiter seemed to be very distracted, he disappeared and returned about a half hour later around 10:30 p.m. to take our order. We left the restaurant after midnight. The redeeming quality was we did not eat a heavy meal so it sat fine with us.

Milos has valet parking, so arrive early, sit at the bar and have a cocktail, their Gin Sour and its aromas of citrus are heavenly. If you are a group, reserve the wine cellar for a special occasion. If you must go with the late-night menu after 10 pm so be it, but the regular menu is so much better and a lot more expensive. 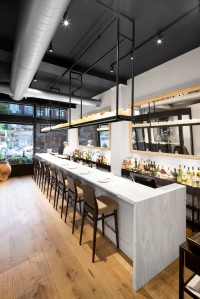 A few of us started with wine by the glass. I had the Vidiano/Plyto, Skipper Blanc, Rhouse (Crète) 2013 for $ 15.00. it contained aromas of lemon, apricot, thyme and vanilla. A private import from the island of Crete it paired well with the fish. My BFF had the red Skipper which she enjoyed as well. We were brought some bread and the classic ritual of olive oil drizzle in a plate that everyone lapped up. The oil I must admit was delicious and buttery, like a good Greek olive oil should be. 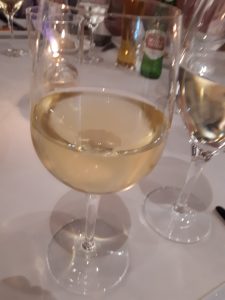 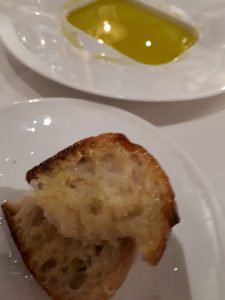 I started with Fresh Organic Salmon sashimi and my friends had the Milos Mezze platter.I got three small squares of sashimi, that I inhaled in 30 seconds. That’s it, gone baby gone.The salmon squares were super fresh and totally savory with only a drizzle of olive oil. The mezze platter consisted of 4 pita triangles, a dollop of tzatziki, htipitis (red pepper/feta dip) and taramasalata and a little radish salad. Not much really, especially if you are hungry or have a big man appetite. I got to sample the taramasalata, which I loved. It had the perfect consistency and hit all the right notes. 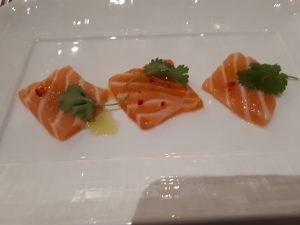 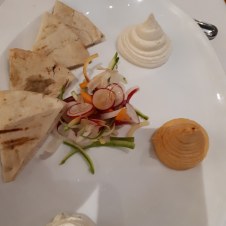 For our main meal, most of us ordered the Dorade/ Sea Bream, a white flaky fish flown in from the island of Kefalonia in Greece. It was grilled and served with 1 broccoli floret and a lemon wedge. It was delicious and tender, simply served with hardly any accoutrements. Mr.C was the only one that had the Filet Mignon “Black Angus” served with broccoli and oven roasted potatoes for an additional $ 10.00. He enjoyed the cut of beef and found it perfectly cooked, but he did mention he has had better.

The evening ended with two desserts, a raspberry sorbet for Lulu and Baklava and espresso for me. The Baklava was a small piece of perfectly delicious layered honey nut sweetness. This late-night menu does not allow for any substitutions, any additional items have a cost. All in all, the evening cost beyond $ 65.00, with the cost of the wine, coffee, tax, tip and valet.

My lesson this evening, if you must go, have the regular menu and splurge and live a little. Another option is to stay home and cook your own fish for a fraction of the cost. Milos is great, but it is very over rated and overpriced. The late-night menu should be renamed the Sampler.
For this foodie, I was glad to check it off my bucket list, but the food did not leave a lasting impression.