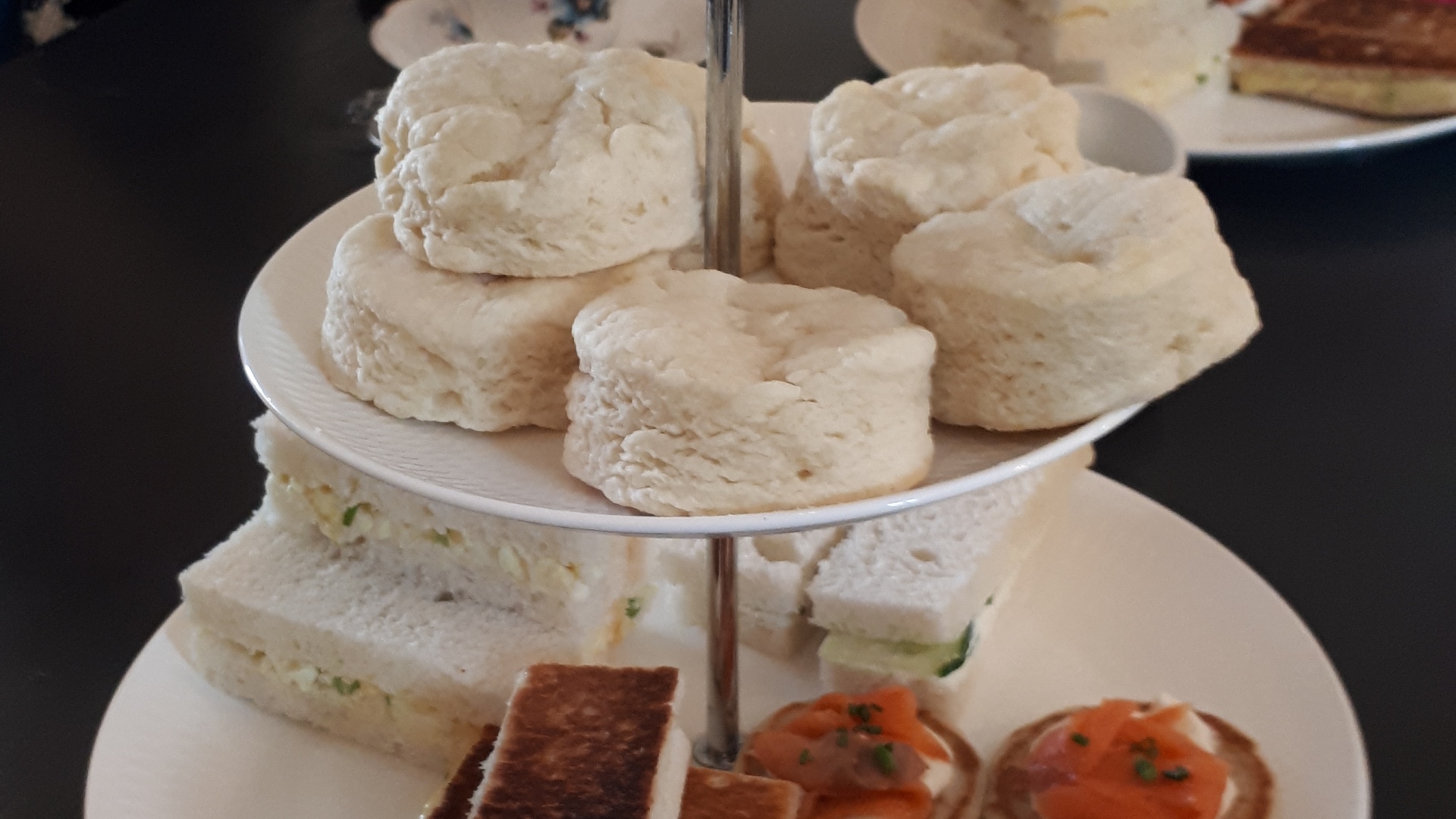 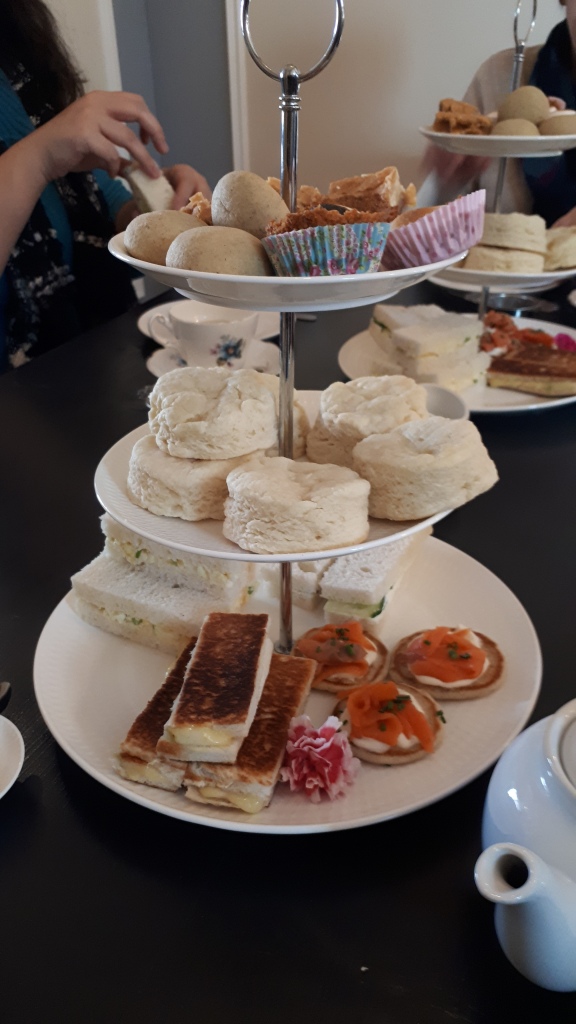 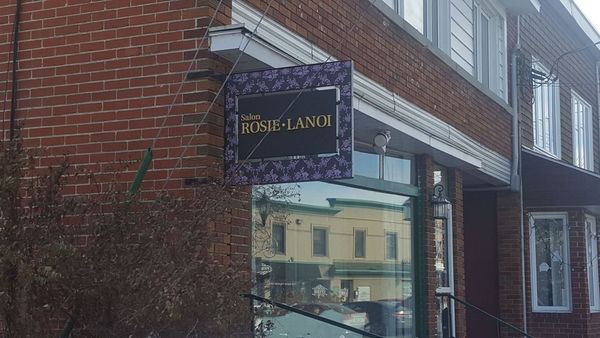 It has become very in vogue as of late to have English Afternoon tea. The insurgence of many specialty tea shops, salons and tea houses have popped up all over the place not only in Montreal but all-over North America. The last decade has seen a boom in expensive tea shops where a variety of teas from all over the world can be purchased. Montreal is no exception with the likes of David Tea’s, Kusmi Tea, Camellia Sinensis, Le Chat Noir and many more. Along with the tea shops, we have seen an influx of places dedicated to Afternoon Tea service and the bubble tea, which caters to a whole other clientele.

In the last century, Tea Time was usually something relegated only to high society or hotel guests. It was only served in some higher end Montreal hotels, like the Ritz or The St. James. It catered mostly to women wanting to have social tea with their friends in the afternoon or business women who wanted something a little more elevated for their taste buds other than to sit in a conference room with stale coffee. It was a grand idea, even some major Montreal Steakhouse’s located downtown which mostly catered to businessmen luncheons saw an opportunity to jump on the afternoon tea bandwagon.

Whether it’s being served in a fancy hotel, a special tea house or a cafe. Today every commoner, English or not , is enjoying having Afternoon Tea; it has become more of a social thing for the masses. Let’s not confuse afternoon tea with high tea as some of my non-English friends call it. Afternoon tea is a light meal typically served between 3.30 pm and 5 pm, this custom originated among the wealthy social classes in England in the 1840s.

High Tea, is a name for the evening meal or dinner. It is usually associated with the working class and typically served between 5- 7 pm, because the working class usually got home later from work. High Tea usually consists of a hot dish followed by cake and bread, butter and jam and is served on a high dining table.

Where Afternoon Tea Services is served in the parlor on low coffee table and more comfortable seating. Afternoon tea is usually a lighter blend of traditional teas from India and China and are designed to compliment the meal which usually consists of light sandwiches such as watercress, cucumber, egg, salmon, blinis, scones, biscuits, muffins, cookies, sweet pastries and cake, with jams and crème fraiche. 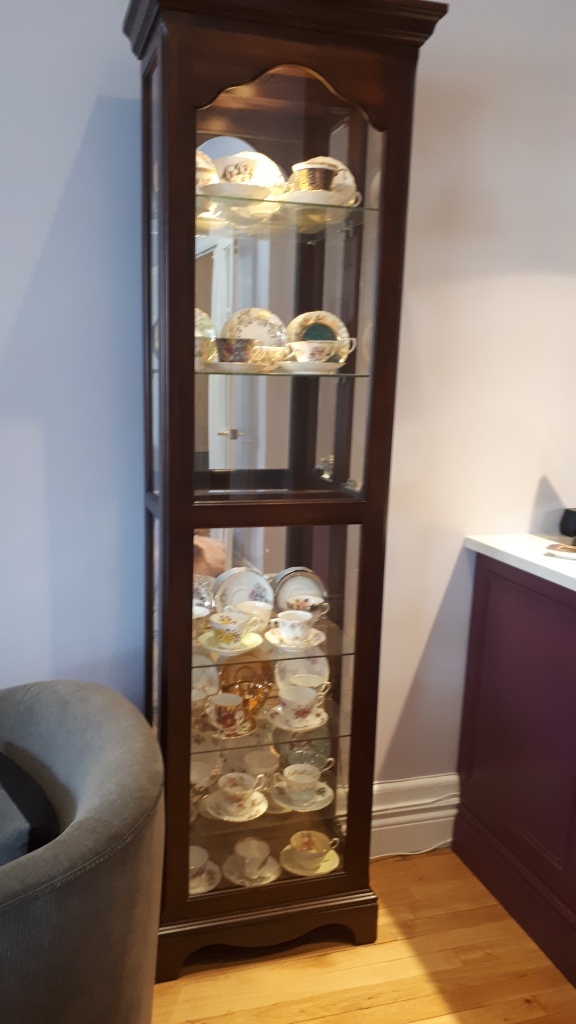 That being said, there is a whole etiquette around tea services and it varies from culture to culture. Tea Etiquette is not something many people are truly familiar with and it can be elaborate and very detailed with many rules. Something we will not get into here.

Enter Salle Rosie-Lanoi in Pointe Claire. Opened roughly over a year ago, it was a welcome addition to the neighborhood. Especially since the West Island which is predominantly anglophone, never truly had an authentic tea salon to call its own. As a West Islander for over 31 years now, I had yet to have experienced afternoon tea close to home. Over the years, it was mostly at some hotel or tea house in town. I always found it strange that a predominantly English neighborhood would not have a designated tea house. Tea Time was common for me even as an Italian descendant . My mother always had a cup of tea and potato frittata sandwich waiting when we got back home from school at 3:30 in the afternoon.  Maybe she was ahead of her time, certainly different from other Italian mom’s who were busy in the kitchen making pasta for the evening meal. She only served orange pekoe tea back then and chamomile if you were not feeling well. I always thought my mom was a closet Brit with a German name.

Nadine & Christine, the owners of Salle Rosie Lanoi had a similar heartwarming experience with their grandmother’s Rosie & Lanoi, where tea time was a special occasion for them. Their dream was to open up a tea salon to honor their grandmother’s tradition. The idea was concocted by Nadine Pereira and Christine while working together. Nadine also has had previous experience running a company called Flour & Water where she would make her own sweets for special events. Salon Rosie Lanoi, is located in a small house at the intersection of Cartier and Lakeshore Rd. in quaint Pointe Claire Village. The small home that holds the tea salon was totally renovated in light pastel hues, with new comfortable modern armchairs, coffee tables and curio cabinets that displays some of their finest china. A private room for special events or larger groups is also available. The space is welcoming, clean and very quiet especially on Sunday afternoons. The décor is elegant, yet simple and the tea service is served with the proper accoutrements like three-tier platters, beautiful fine tea cups and dishes. There is a good selection of popular teas served with scones, sandwiches and pastries, with th Afternoon Tea Service or by single items if you want to spend less. I really like Salle Rosie Lanoi and would definitely return with a friend for a quiet tète a tète and some good tea. 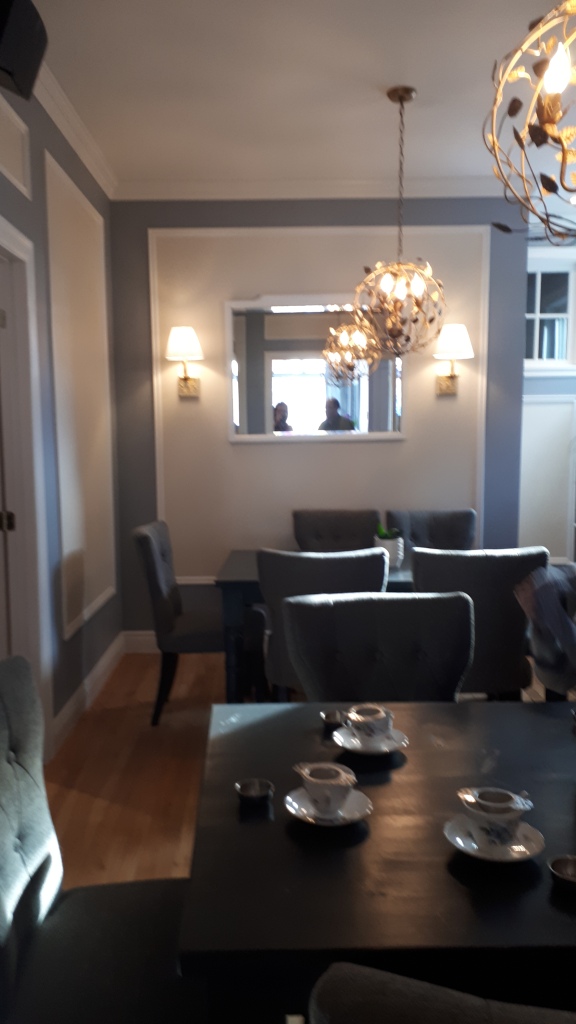 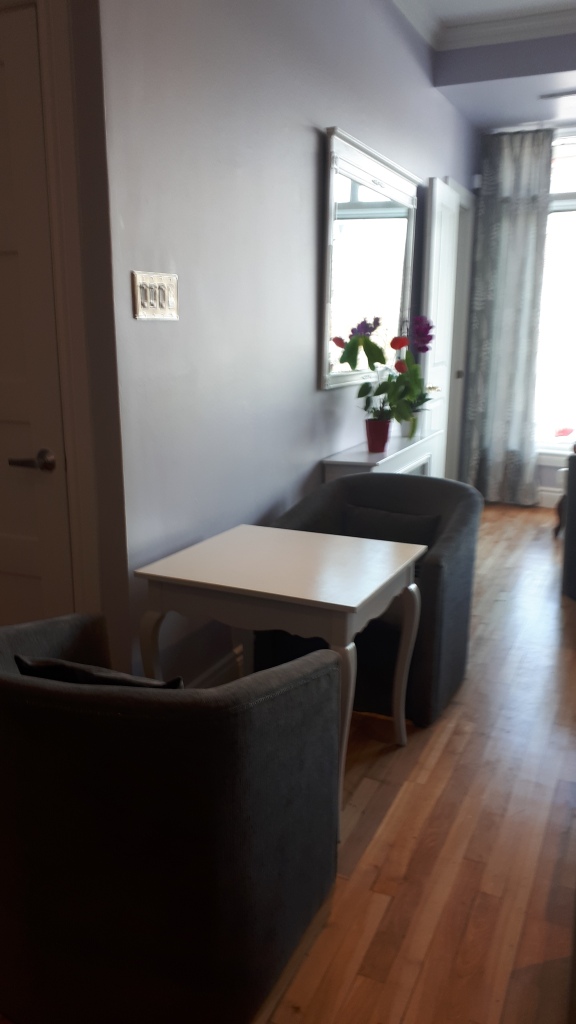 My first experience at Rosie Lanoi comes with mixed feelings, it was not optimal. We attended this afternoon as guests of a Meetup Group. We were told to show up at a certain time but ended up waiting outside for 10 minutes in the freezing cold before they opened their doors late. We were sitting down for almost 20 minutes in an empty place before we got served the menus. Our host knew the owners apparently, but we did not get preferential treatment.  We all decided to go with the Afternoon Tea Service at $ 25.00 each, but were not given any details about what it included, it was also not detailed on the menu. We had to ask our young server who gave us a less than adequate response. I did not find her too be very hospitable or accommodating and actually quite inexperienced and shy. It was very awkward. I ordered my usual a Lady Earl Grey Tea, which came served in a white generic tea pot and I was given a nice fine porcelain cup, with a spoon and strainer.  Our food platter arrived 20 minutes later. 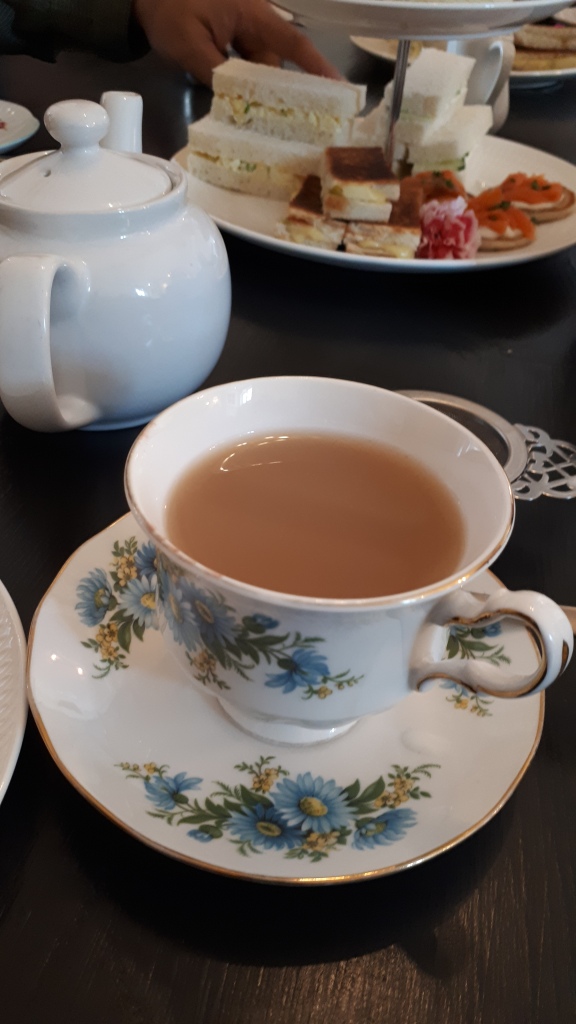 We received two multi leveled tiered plates between 7 people. We were served 1 tray for 3 of us. The other group had one tray for 4 people. The latter had more sandwiches to accommodate the extra person. One person in my party, ate all the cucumber sandwiches and did not leave any for the others to sample. Etiquette number one, big faux pas, you only get two of each. When I asked the waitress if I could have another sample of cucumber sandwich because someone had eaten my portion, she looked stumped and said I would have to pay $10.00 extra for another sandwich. I was willing to pay for it, except being the polite person I am, I asked if anyone wanted to share with me. They nodded quietly and lowered their eyes. They did not want to spend another $ 5.00, which is understandable, neither did I. So I declined but was mildly disappointed. I tried to make light of the situation but was a little put off by the lack of hospitality and the sheer lack of manners from one of my dining partners. Especially after pointing out the situation, and not being offered an apology or remedy. We all make mistakes, but how rude I thought. As the day progressed, I my mired in my anger at the lack of manners and etiquette . 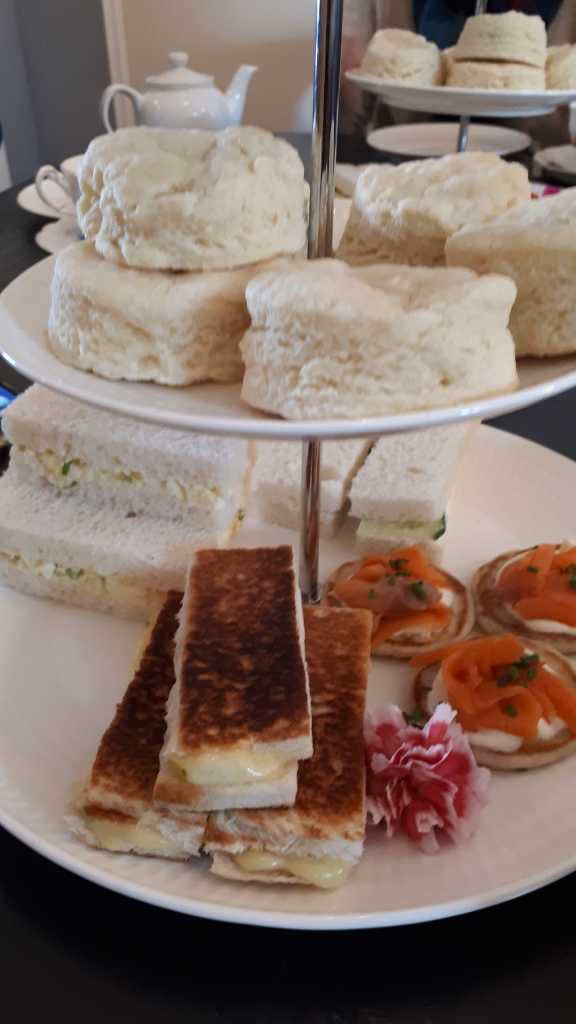 The wrap up, as for the food I did get to sample. The egg salad sandwiches were good, the bread was fresh and they had the right amount of flavoring and hints of green onion. The scones, were palatable, but a little on the dry side, they were better with some butter and crème fraiche. I have had better scones with afternoon tea in Montreal at Gryphon D’or where they are delicious. The aged cheddar and apple sandwiches were also very good but little on the heavy and greasy side. I had way too many of them for one sitting. The maple tart was very sweet, not the best-looking thing but very tasty. I had two of these as well. The smoked salmon blinis with cream cheese were a little tasteless. We had a lot of round cookies left over, not sure what they were , but they that tasted a little like almond cookies. Also included in the list of sweets was an apple-caramel square that was delicious but very similar in taste to the maple tart. 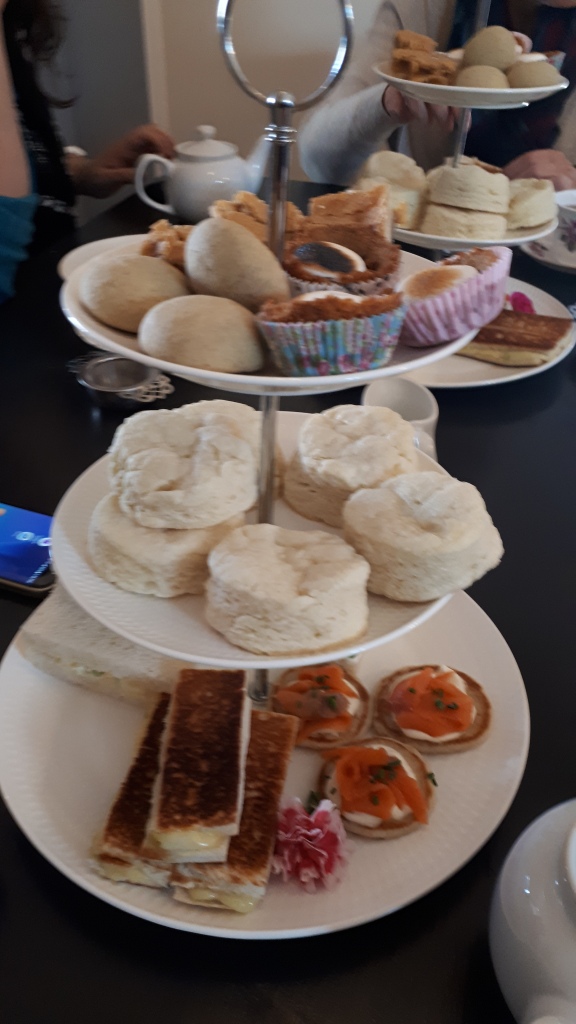 Even our departure left me feeling a little weird. As we huddled in the entrance trying to put on our coats, no one uttered a word.  It was a strange day, what can I say. We all have our off moments. But today was a good lesson in proper etiquette for me. Next time I go for tea with a group, I will definitely mention two sandwiches per person if the waitress does not mention it first.