The month of May is when the weather gets warmer and the flowers start to bloom. This month after a long winter we were longing for terrace weather and a good cold brew. It did not happen too quickly as some days were more like fall temperatures. Nonetheless, we decided to split our month into two fine dining experiences and two casual. Hence the week of the pub crawls.

Enter Dominion Square Tavern, opened in fall 2010 we have wanted to try it for a while. It was getting frustrating, time was passing so quickly and we just couldn’t make it there fast enough.  Every time we were in the vicinity of the restaurant we either did not have reservations, were too early for dinner or the place was closed. I made reservations for  this evening months ahead.  A word of warning, reservations here are a must. Don’t think you can drop in during peak business hours on any given  day and especially on weekends and get a table. Dominion Square Tavern is always packed to the brim. This was the case this evening for some patrons who happened to walk in off the street, to their disappointment they were turned away.

The Dominion Square Tavern has quite a history. This original building which is just down the street from the Sun Life Building and Dorchester Square (or as old timers still call it-Dominion Square) used to be a hotel / restaurant, which burned down in 1927. A narrow strip is what remains of it and in the in the 1970’s it housed the first gay bar and then the Dominion Pub which was for men only.    With the abolishment of only male taverns in Montreal about a decade later, the pub, if anyone call recall ;  had become so desolate and run down.  The same can be said about that part of the street. I hardly ventured there, maybe one late night in 2007 to go to Dunn’s next door to the Dominion Square Tavern. Eventually  the gay community  got new digs a little further down St. Catherine past Beaudry street and women wanted to lunch in nicer places like Birks Café.

In September 2009- Alexandre Wolofianski, his wife, Nicole Lemelin and Alex Baldwin owners of Whisky Café, and Baldwin Barmacie, purchased the old heritage pub and started renovations. Keeping with tradition they kept the gorgeous patterned floors, walls and plaques. Only the bar, some banquettes and the bathrooms have been updated. They even kept the old washed out mirrors that create the aura of being stuck somewhere in another era! I have to admit I got a little creeped out by the mirrors. Not that I don’t like antiques, but not washed out items. I heard that lots of money was spent in renovations for The Dominion Square Tavern but I felt the place a little washed out. Mirrors aside, it was not for the boisterous downtown crowd filling the tables, the place would have been a little depressing Nonetheless, it is the food I came for and my mood was happy this evening because Mr. Malibu had joined us for dinner. We were celebrating Mr. Malibu belated birthday and he always has interesting stories of his days spent in California.

The Chef at The Dominion Square pub is Eric Dupuis who has been at the helm since its opening. The menu is part English tavern fare with a mix of French and a few North American dishes. It serves anything from Scotch eggs, to Gravlax, Croquettes, Bangers and Mash, and Pulled Pork Sandwiches.

I strongly recommend starting with cocktails, they are the speciality here. I was more in the mood for beer tonight and I looked at the menu and was going to base my decision on what I ordered. Our waitress suggested the Fish and Chips which were the house special this evening. I went the traditional Friday night pub grub food again this evening and ordered a Cheval Blanc Pale ale beer. Frenchie and Mr. Malibu ordered pale ale from St. Ambroise. My beer came with a twist of lemon and it really hit the spot. Refreshing! 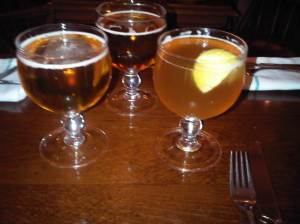 We looked around and noticed the portions were of a substantial size, so we opted out for the Starters this evening and went directly for the kill, Mussels with Bacon in Cider for Mr. Malibu, Fish and Chips for The Foo-Foodie and Frenchie had the pulled pork sandwich with fries.

Mr. Malibu’s mussels were very good, cooked in cider with pieces of smoked bacon. Very tender and not chewy. I have to admit I do not touch mussels with a ten foot pole as back in the early 90’s there was an epidemic of tainted mussels at L’actuel on Peel Street and I knew of the person who ate them and became severely ill and never fully recovered and remained hospitalized till the end of his life.But I figured I would go as far as one, it wouldn’t kill me I thought. 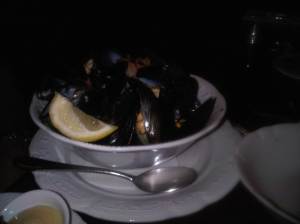 My fish and chips were very good but not as good as last week Fish and chips at Tavern Gaspar.The fish was moist and tender, but lacking was a little extra punch of flavor. The beer batter made all the difference. 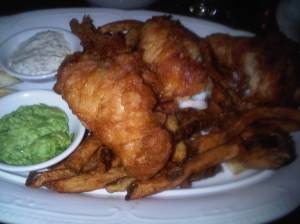 Frenchie’s Pulled Pork sandwich looked a little dry. It seemed to lack the moistness of usual slow cooked shredded pork. Set inside the bun, it looked perfectly round and not much extra meat . He still prefers Blackstrap BBQ pulled pork sandwich. 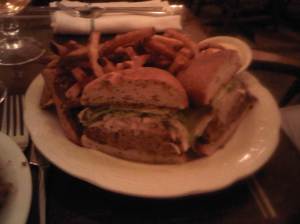 I had enough room surprisingly for the Nutmeg Beignets with Sour Cream. , they came served hot and lightly sprinkled with a mixture of nutmeg and sugar. I dipped mine in the sour cream that came on the side. Frenchie and I had our usual espresso with the beignets. 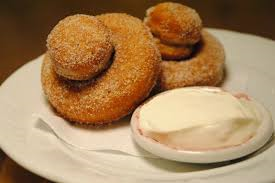 Service was extremely friendly and jovial, and we loved our pixiesque waitress who was so very helpful and had the greatest smile. Mr. Malibu being very talkative when it comes to the opposite sex asked her what she does in life beside waitressing and discovered she was studying nutrition. We ribbed her about maybe wanting to be a chef and she responded with a quick no “it’s really crazy in the kitchen”.

We all enjoyed the Tavern with its old décor and whitewashed walls and downtown Friday night crowd.I was very glad I had finally tried it and would love to return, maybe lunch would be better with its business crowd, swear I saw a few familiar faces from The Montreal Gazette at the bar. But then the mirrors were so washed out, their faces were so distorted.

We continued on our merry way to revisit some more old downtown haunts on Crescent Street. We stopped at the terrace at Weinstein and Gavino to have a few more drinks.At the end of the eve, we decided to call it a night. On my way home, my stomach started to rumble and swell. I started to not feel some indigestion. Was it the tartar sauce or the sour cream?

Oh no I ate a mussel! I’ve been poisoned! Fortunately I survived the weekend but did came out of it a little brain-damaged!